It’s a good time to be in the market for a new ride if you’re a parent, or just a fan of family rides in general. From crossovers to big SUVs to, yes, even the few minivans that have managed to hang in there, the market has tilted heavily toward family-haulers, so you have no shortage of great new vehicles to pick from if you play chauffeur to kids and/or pets on a daily basis. One of those new offerings is the 2021 GMC Yukon Denali, the longtime defacto SUV of upscale suburbs across the nation. And it’s better than ever.

Sporting all-new fancy clothing inside and out, the swanky Yukon aims to impress buyers with its Texas-sized grille, clever tech, and I’m-better-than-you attitude. But is it enough to outdo the competition, especially when the all-new Tahoe—which I drove a couple of months ago—is just so darn good? That was the question I struggled with throughout this test, and I’m still not sure what the answer is. 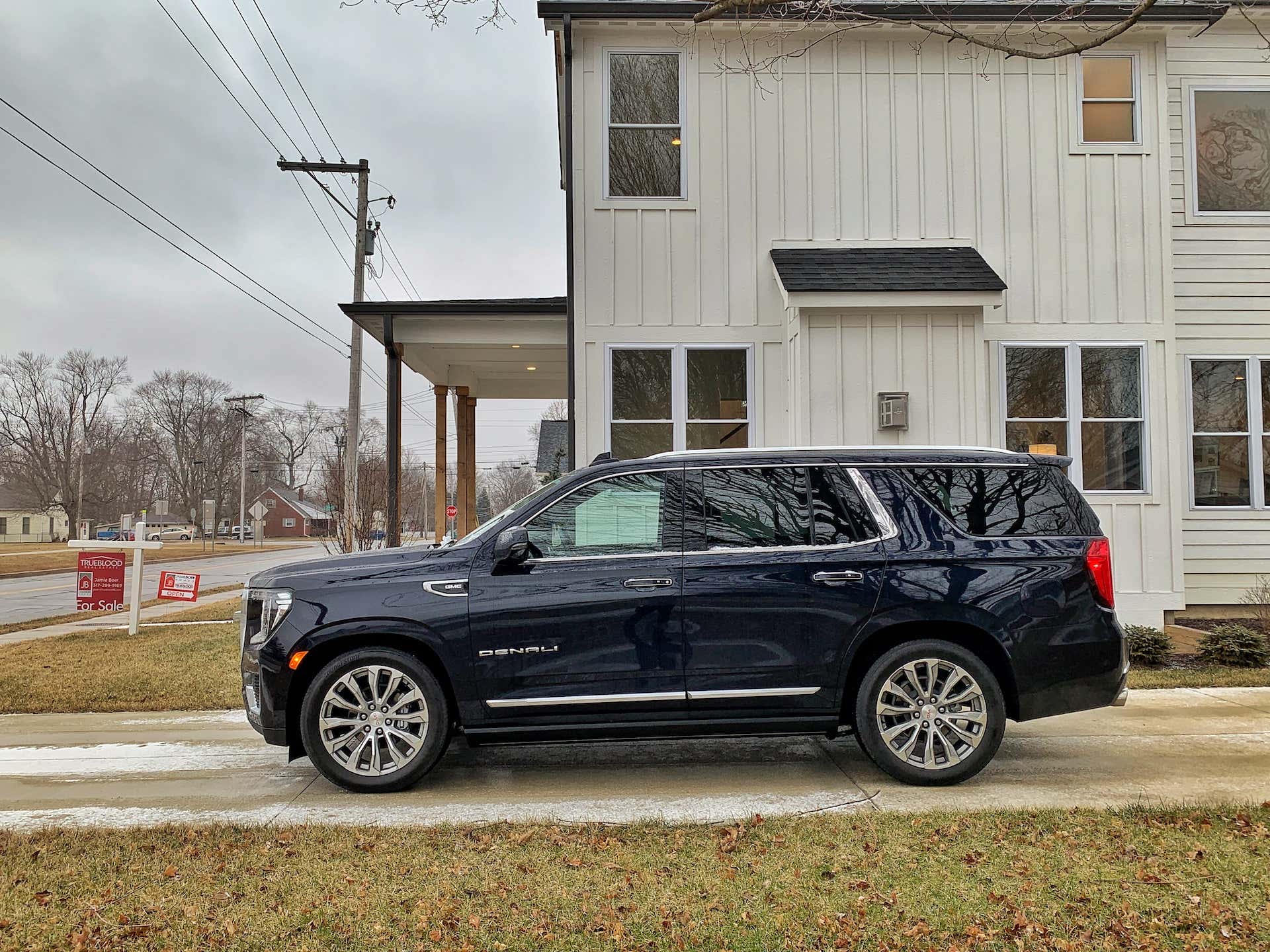 For 2021, the Yukon is new and is ready to continue taking huge bites out of the Large SUV Sales Pie, a fluffy dessert that General Motors has grown fat on over the years. Why stop now, especially when its local rivals don’t have much else going on? The Ford Expedition is aged, about to hit the end of its lifecycle, and doesn’t even offer a V8. Dodge, on the other hand, has the…well, no need to discuss how old the Durango is. Old enough that it should be going to college soon instead of the kids inside it. Perhaps the Lincoln Navigator is the Yukon’s closest rival, and it too is getting long in the tooth.

In what appears to be a segment of one, then, the Yukon looks at its corporate siblings for competition. Selecting every option on the menu maxes out the Chevrolet Tahoe at approximately $84,000, the GMC Yukon at $94,000, and the Cadillac Escalade comes in at $113,000. Keep in mind that all three offer extended wheelbases, the Suburban, Yukon XL, and Cadillac ESV, but the prices referenced above are for the shorter of the two. 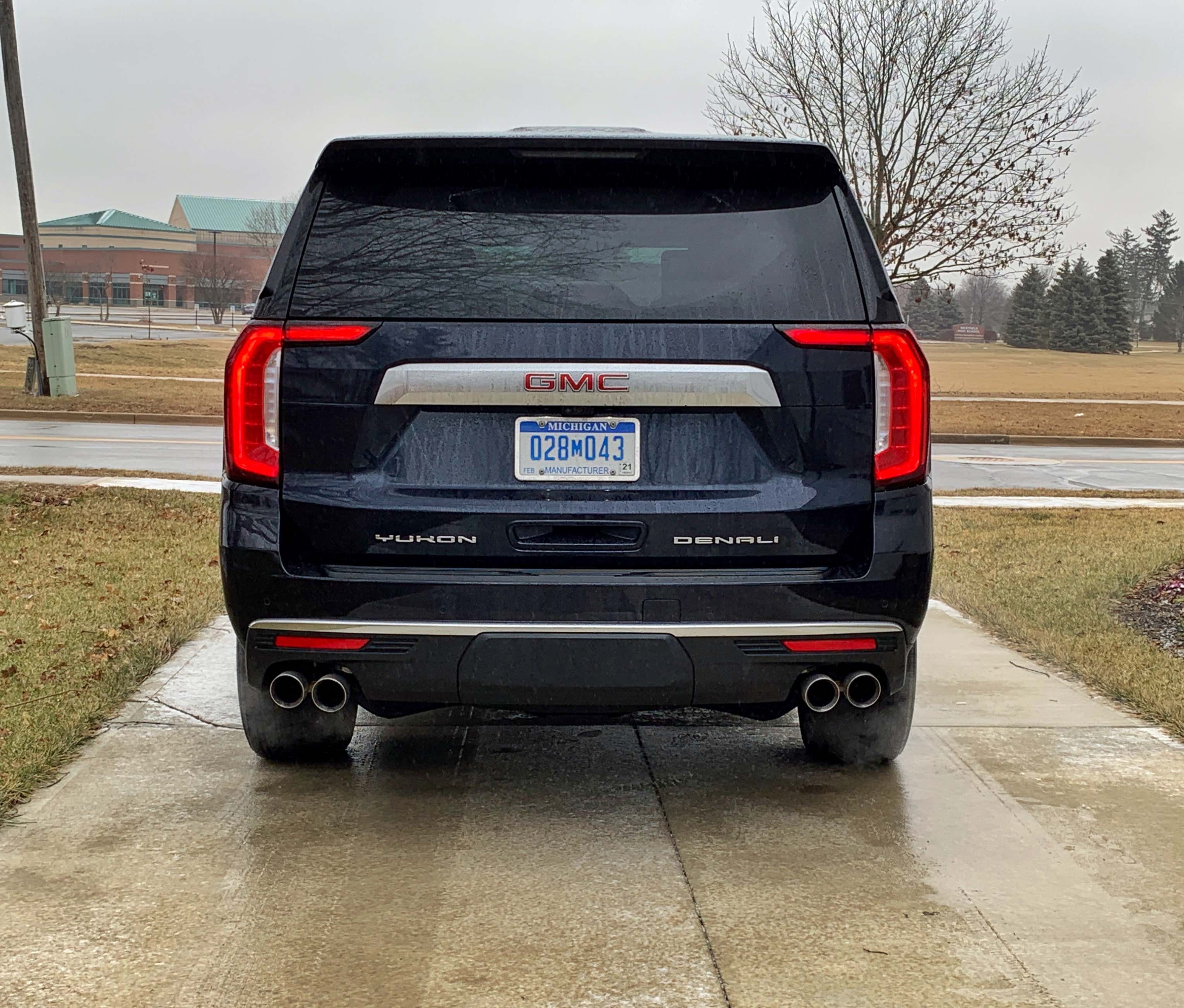 What makes a Yukon a Yukon? In previous years, it mostly meant swapping out Chevy badges for GMC ones, adding more chrome on the outside and some leather inside, and replacing gray plastic trim with faux wood inside the cabin, and finito. Things are a bit different now, however.

Despite the inevitable resemblance to its corporate sibling, especially in the rear end, the Yukon mostly stands on its own with a fairly unique design. Catch it from a distance, most likely parked on the driveway of a fancy house (like the one my realtor friend Alison let me borrow for this photoshoot), and it looks a lot like a previous-generation Cadillac Escalade. Walk closer to it, and the Yukon morphs into a stately SUV worthy of well-off toddlers and company executives alike. 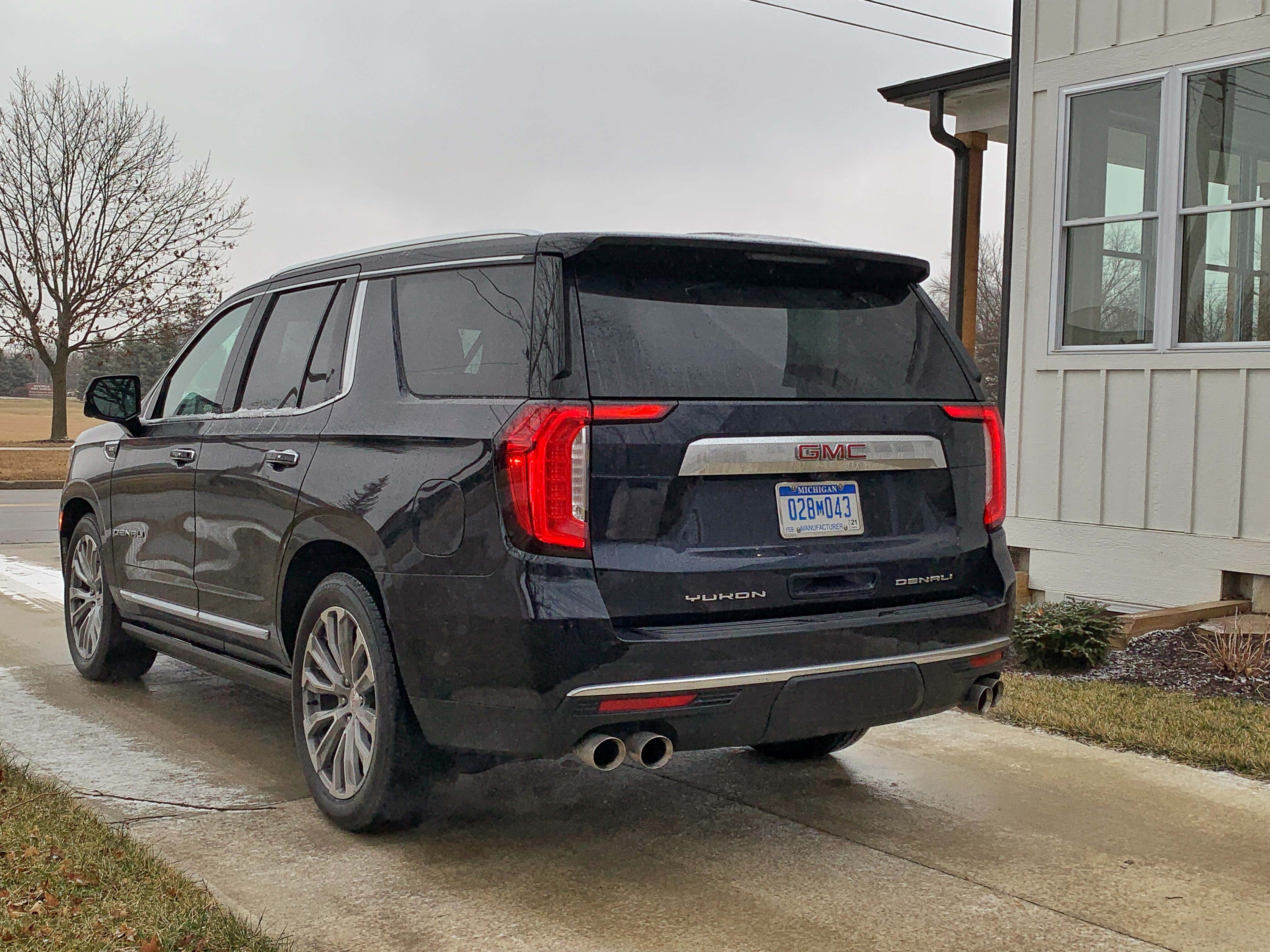 My tester came adorned in a very pretty Midnight Blue Metallic, which essentially looks straight-up black on a gloomy winter day. When the sun comes out to play (and the Yukon is clean), the paint dazzles with vibrant blue, copper, and silver flakes dancing in the sunlight. It’s arguably one of the better paints I’ve seen on a General Motors vehicle, right up there with the Sebring Orange Tintocat on a C8 Corvette I tested last year.

The fascia is dominated by the Denali’s trademark Galvano chrome grille, which GMC claims isn’t just larger but also considerably shinier with “over 10,000 individual reflective surfaces.” While all of this may sound gaudy and all, it actually isn’t. Not everything you see on the front, sides, and rear is actually chrome, but more like a brushed aluminum with a few chromed accents here and there. It elevates the Yukon from its predecessors.

And how about those wheels? Those are some properly handsome 22-inch rollers, which despite making the ride a bit stiff, really help the Yukon look its price tag. Plus, Magneride sorts out most of that stuff anyway. 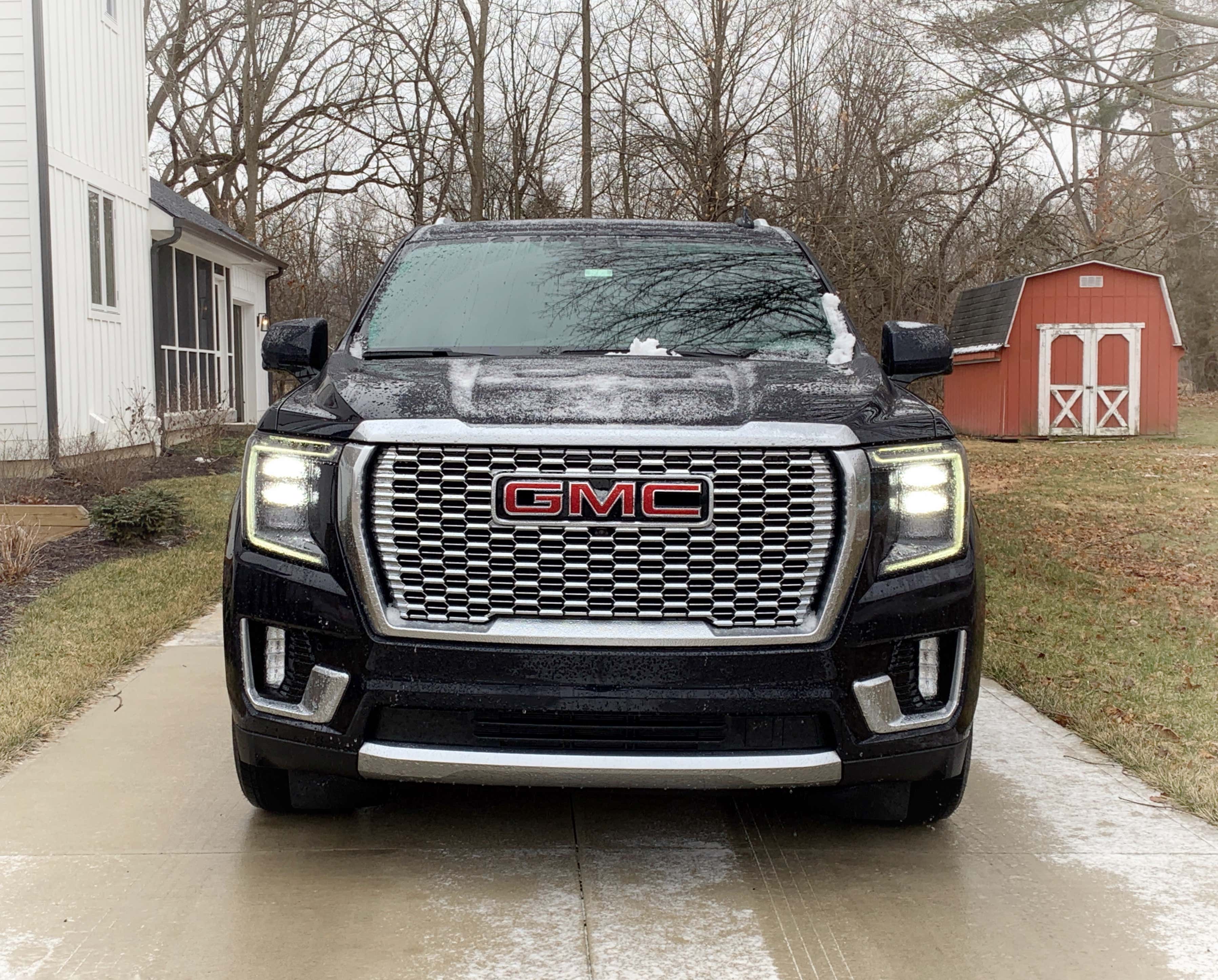 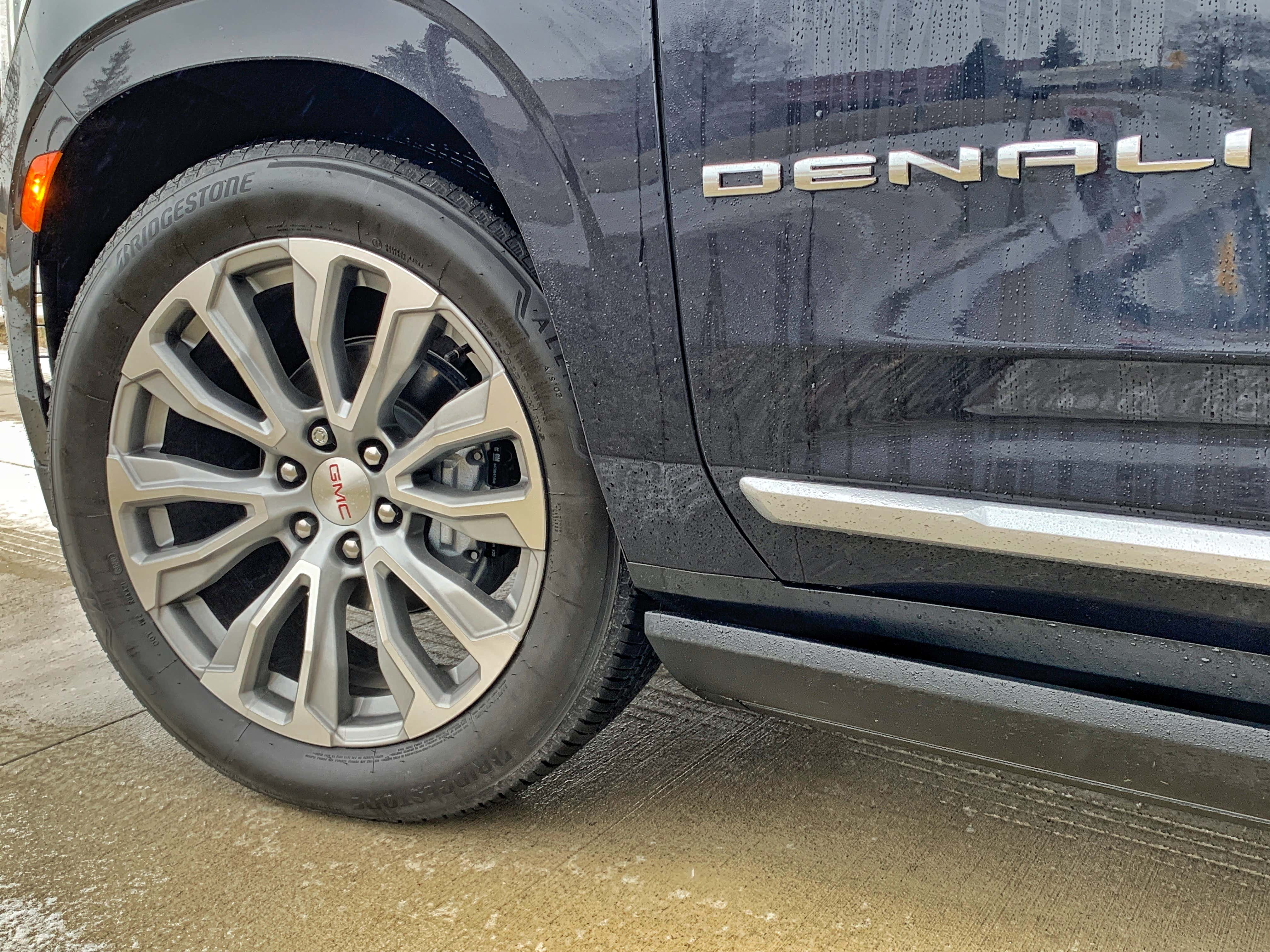 This particular unit came equipped with power running boards, which is to be expected at this price point. Open the door and the running board slides out, close the door and it hides. These are super practical and simply work wonders for little kids and older folks alike—or in my case, someone super lazy who doesn’t want to put in any effort into climbing in or out of a vehicle.

Finally, the Denali’s lighting has been completely overhauled for 2021 not just in terms of design, but also in performance. The previous-generation Yukon’s HID headlights left a lot to be desired and don’t hold a candle to these new LEDs. The new units look great during the day with the new daytime-running-light signature, but at night they are extremely bright and a joy to use. It’s the same story in the rear with the LED taillights.

One of my biggest complaints with the Tahoe was that the 5.3-liter V8 just lacked some real oomph on the highway when fully loaded, which really made me wonder about how poor it’d feel when towing 8,000 pounds. For that kind of job, I figured, the 6.2-liter V8 was simply the way to go. 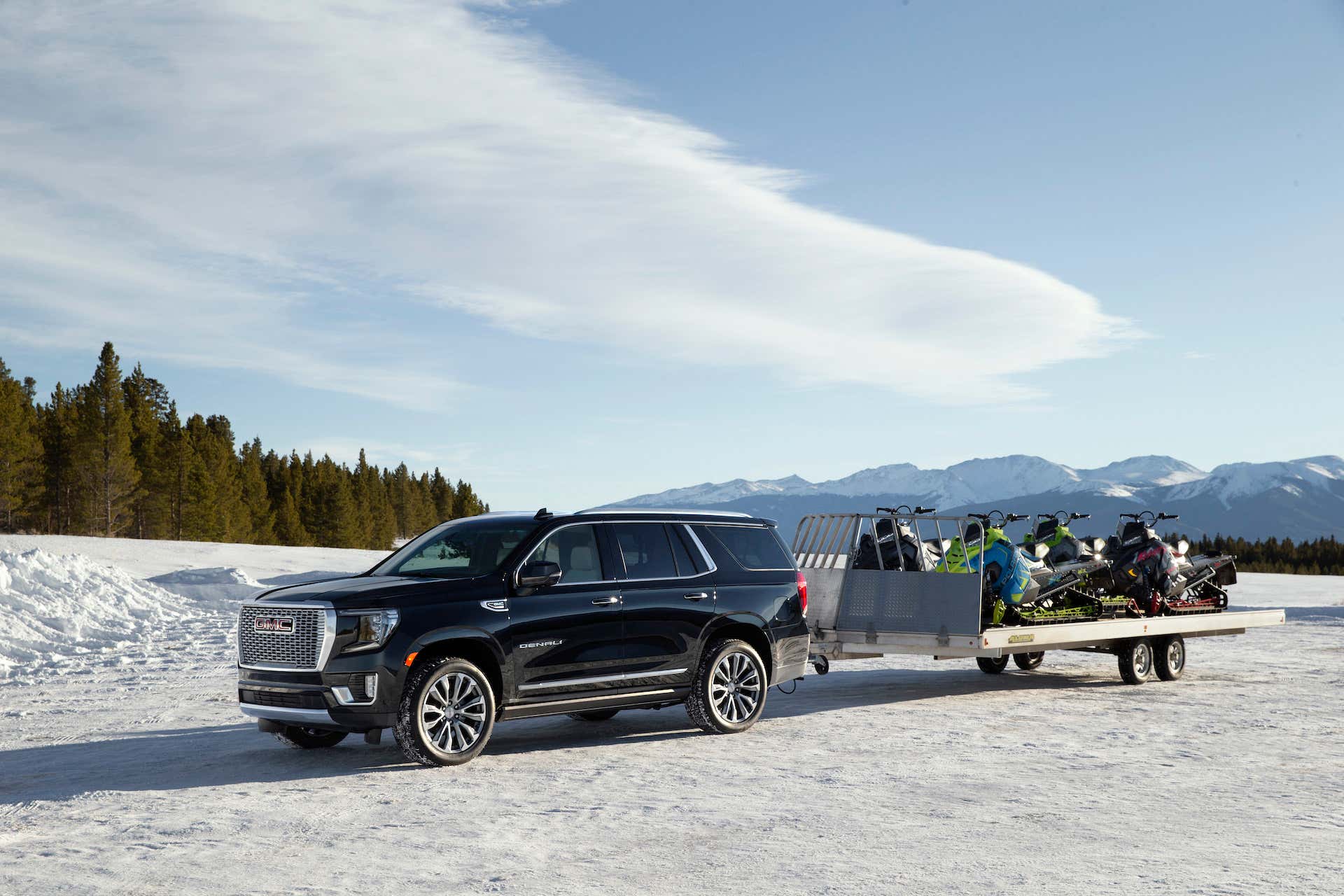 I may not have stuffed seven people and a bunch of luggage in the Yukon as I did in the Tahoe, but I immediately felt the difference between the two. I’m not talking about raw acceleration—355 hp versus 420 is a hefty difference any way you look at it—but in the sense of how the Yukon and its 10-speed transmission manage the engine’s 460 pound-feet of torque. It’s smoother, it’s stronger, and it feels more confident hauling the 5,400-pound SUV.

On the road, the engine feels relaxed, almost too much at times. The throttle calibration takes a bit to get used to, with engine response being delayed considerably to make the three-row family hauler smoother, softer, and more comfortable for the occupants. After all, these SUVs are all about the passengers and not the driver. On the highway, when one can be a bit more aggressive with the throttle, it’s not as big of an issue, but zipping around city traffic can take some getting used to. Regardless, bury your foot into the throttle hard enough and you’ll wake up the beast.

Maximum towing is rated at 8,000 pounds with the 6.2 and four-wheel-drive configuration, which is enough to haul a decent-size camper, boat, or whatever does it for ya. I didn’t tow anything this time, but that might change later this year, so stay tuned.

I’ll start with this: it’s not the most luxurious interior I’ve seen on an $85,000 American SUV. Sure, that’s kind of a bummer given the glamorous exterior, but the new Yukon does have something going on that others don’t: it’s extremely practical. 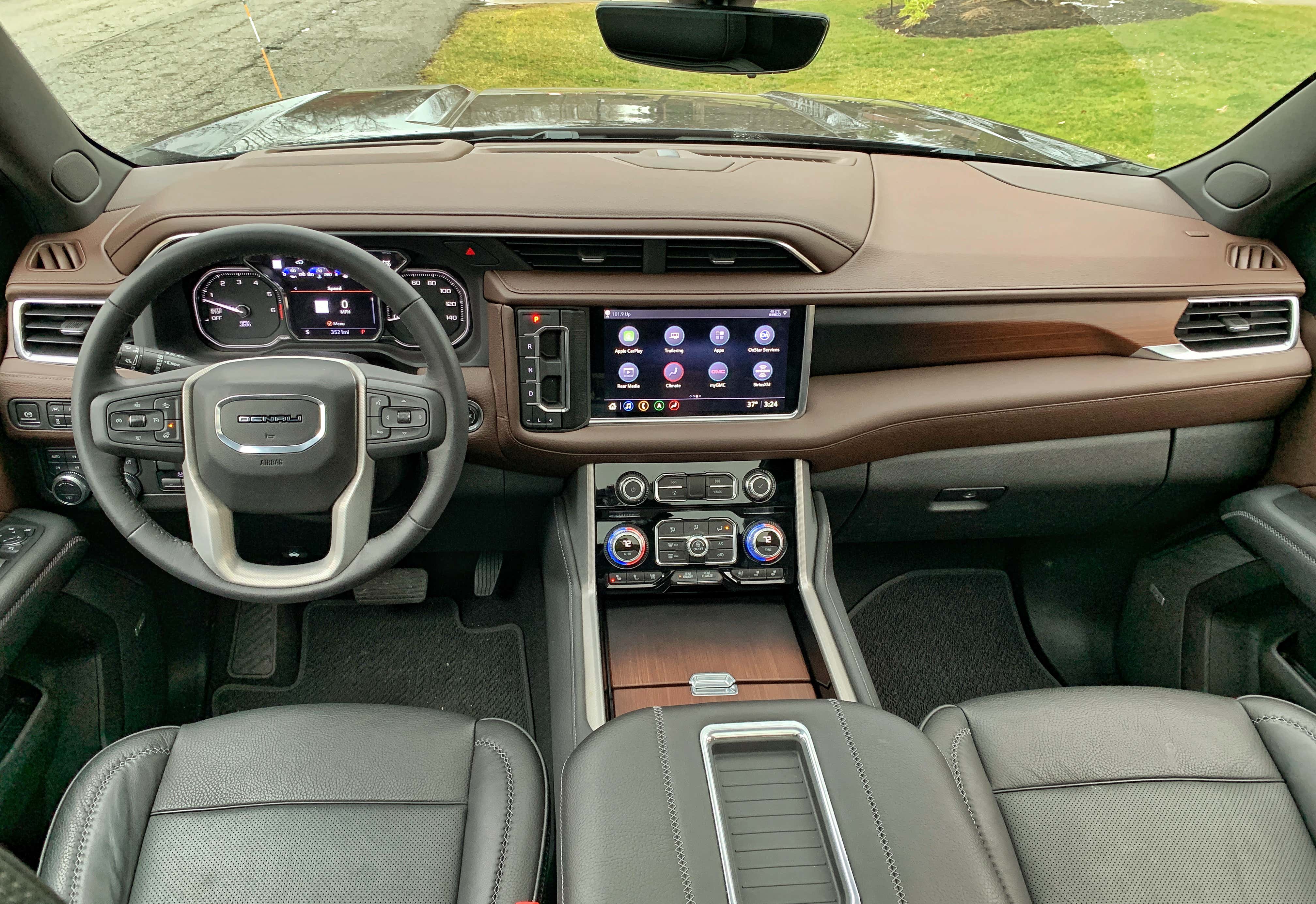 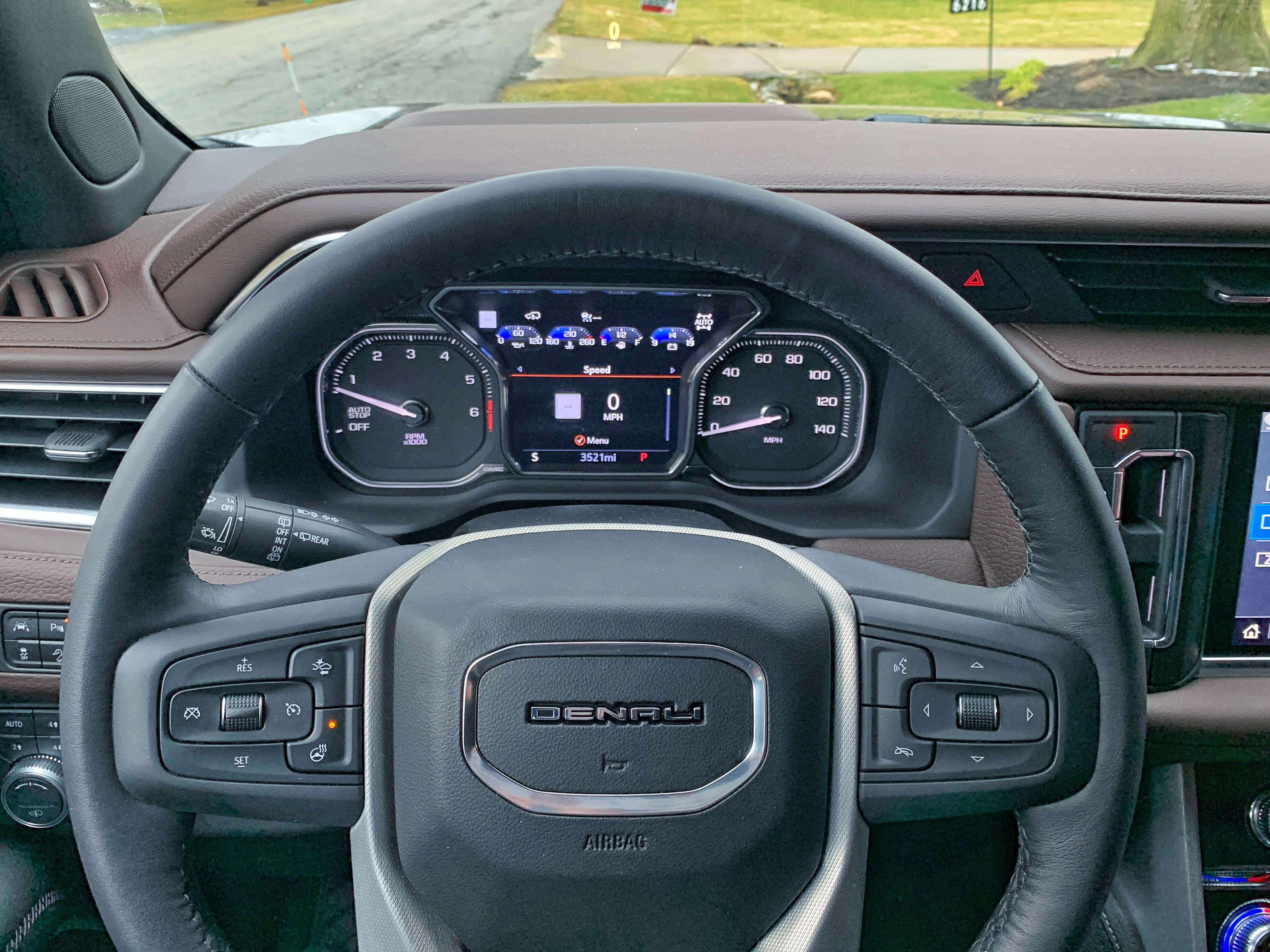 There are buttons for everything—not just a 10.2-inch touchscreen—meaning that all controls are always within reach and can be activated or deactivated as you please. No flipping through screens, digging through submenus, none of that mess. If you need something, you either push a button, flip a switch or turn a knob to get it done.

Many of you have inquired about the push-button shifter, and I’m here to tell you that it’s fine. It’s just fine. You’ll use it, you’ll get used to it, and you’ll go on with your life without giving it much of a thought, and that’s ok. It works.

The seats are just about the best of any domestic manufacturer, which is a GM trait, and they’re excellent for tooling around town or going on road trips. Of course, in the Denali, these are heated and ventilated, but not massaged. Ford still has the upper hand there. The second-row captain chairs are also heated, which is a nice plus for the kiddos during early-morning school runs. Plus, the second and third rows have a separate climate zone with multiple vents throughout. 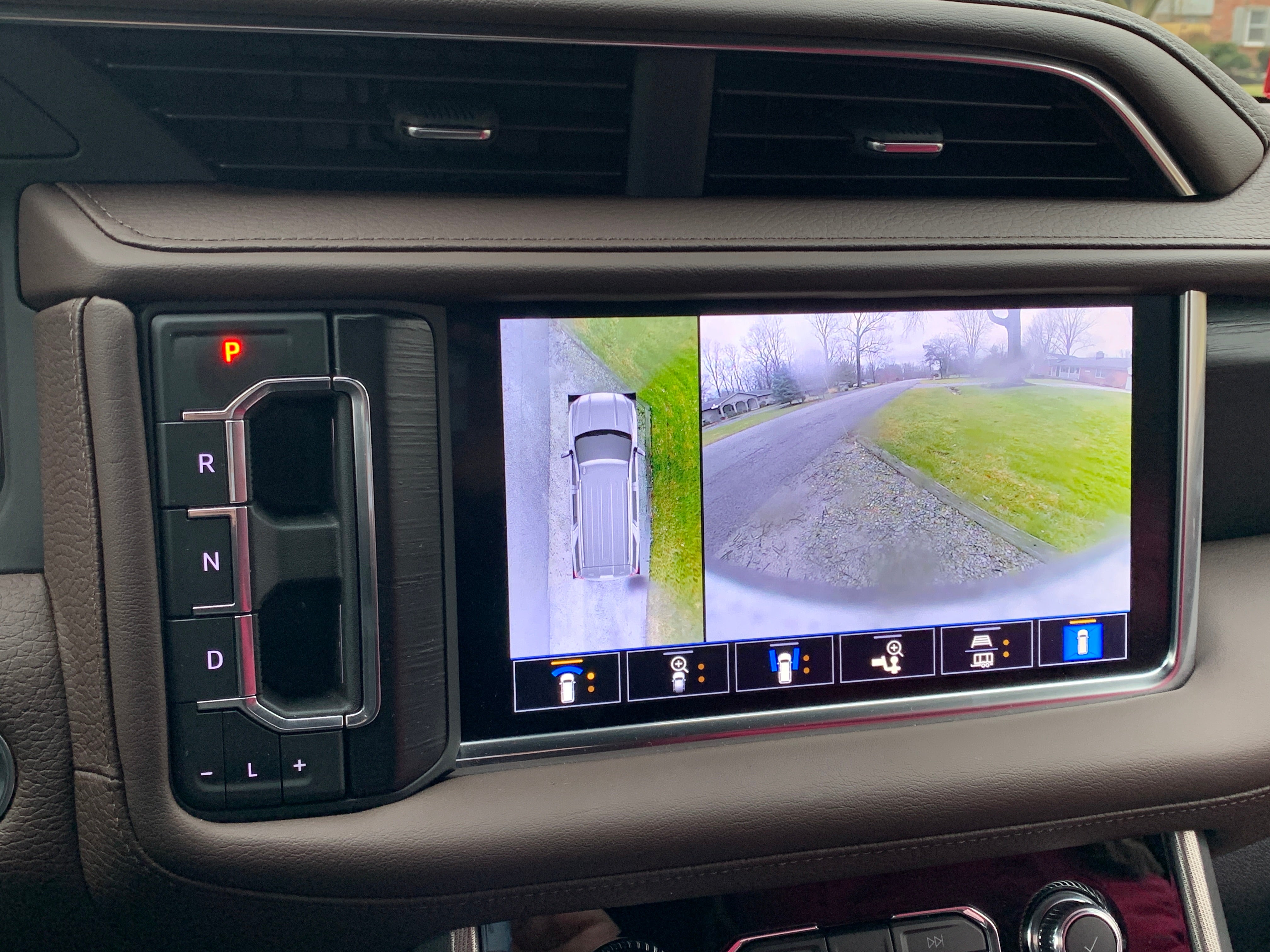 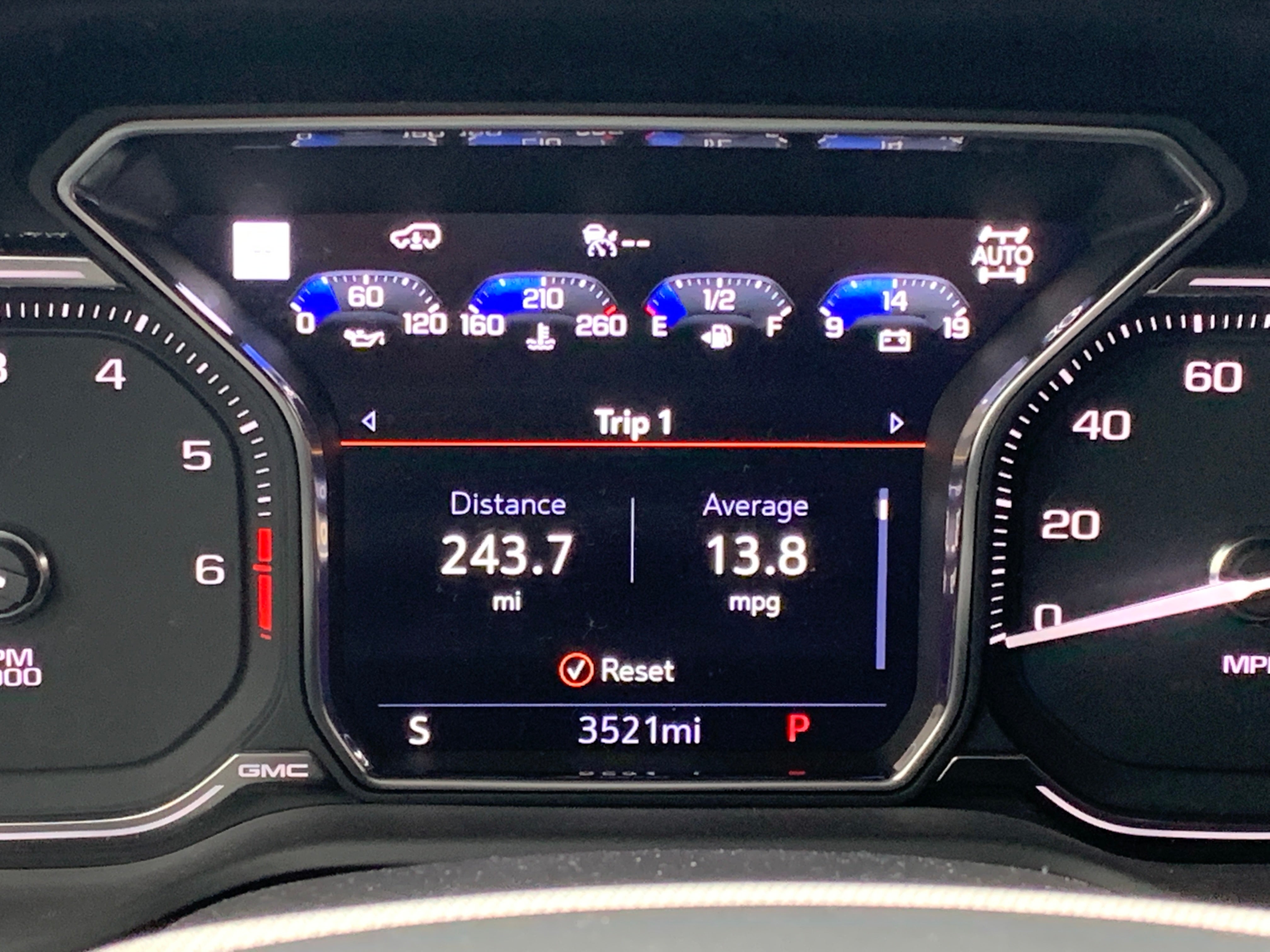 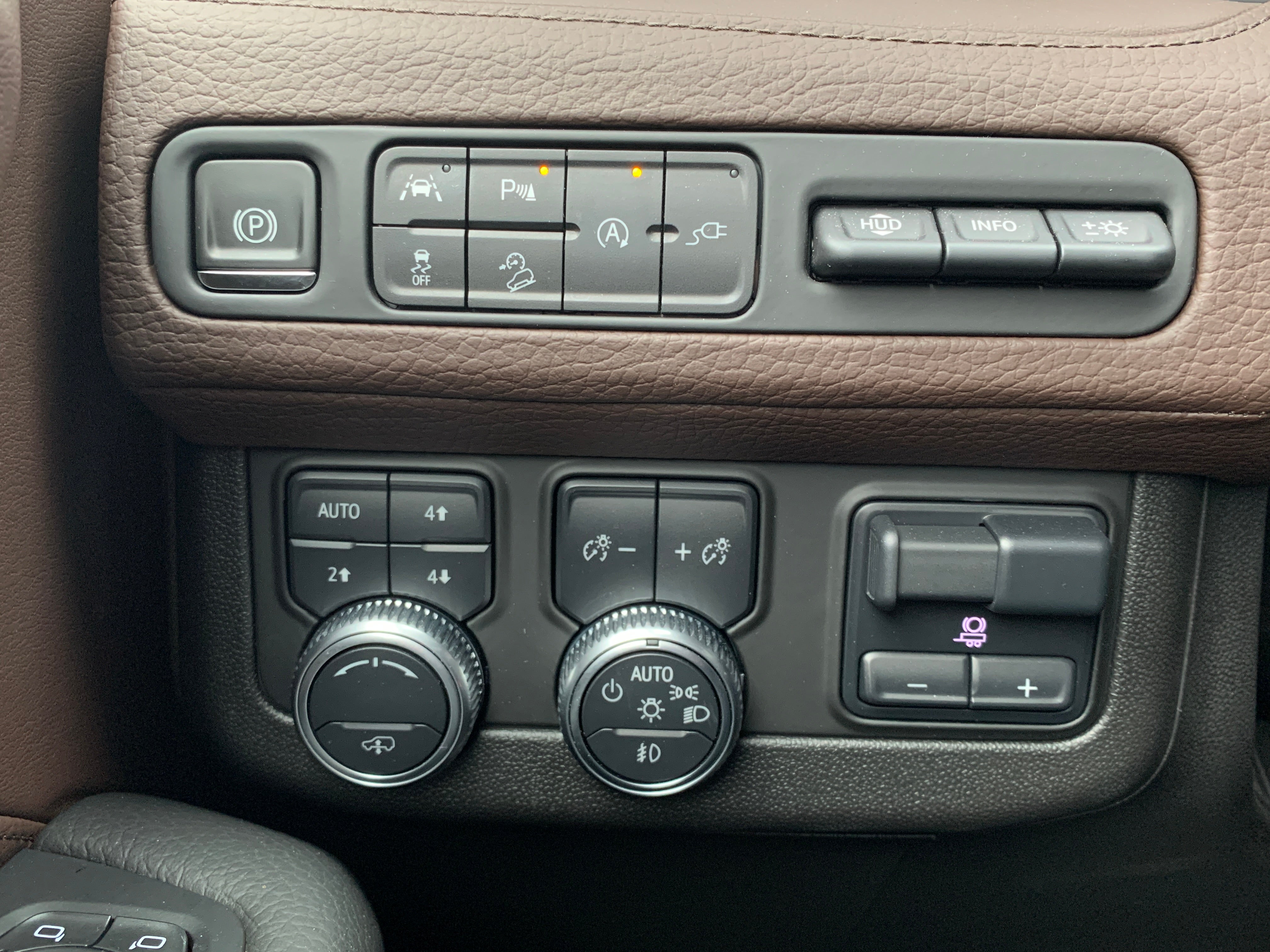 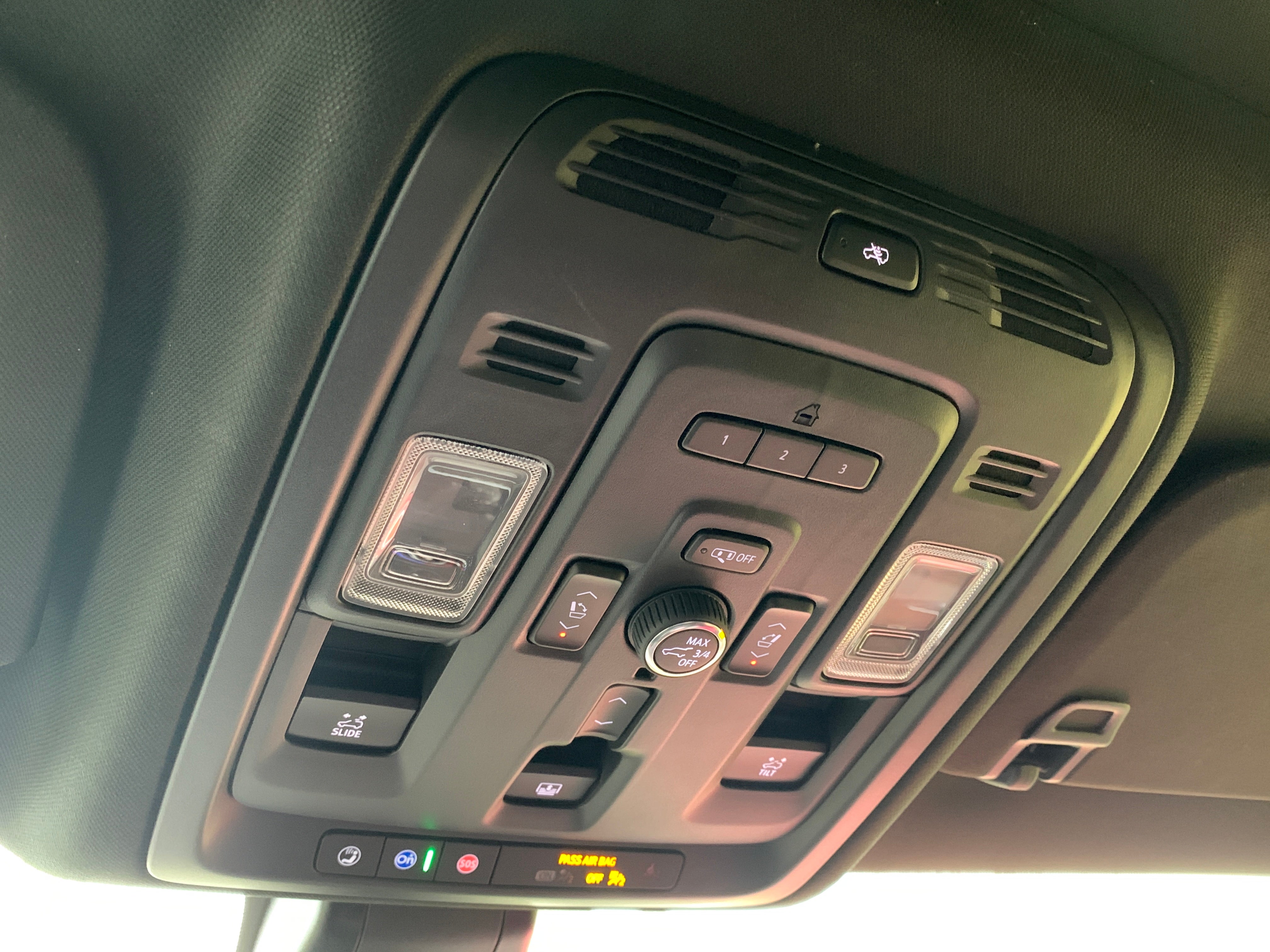 Build quality is far superior than in previous generations, though some materials on the door panels and transmission tunnel still feel not-so-great. The wood trim in my tester looked and felt nice, adding a nice touch of class and visual pizzazz to the otherwise utilitarian cabin.

If you’re going to spend endless hours behind the wheel, you’d be pressed to find a better, more straightforward cabin than this one.

Some of these Denalis will undoubtedly go into black-car executive shuttle duty in New York and Los Angeles, but by far, most of these will be used to transport kids to and from school, piano class, lacrosse practice, and the occasional summer road trip. As a result, they’ve got to cater to these tiny folks. 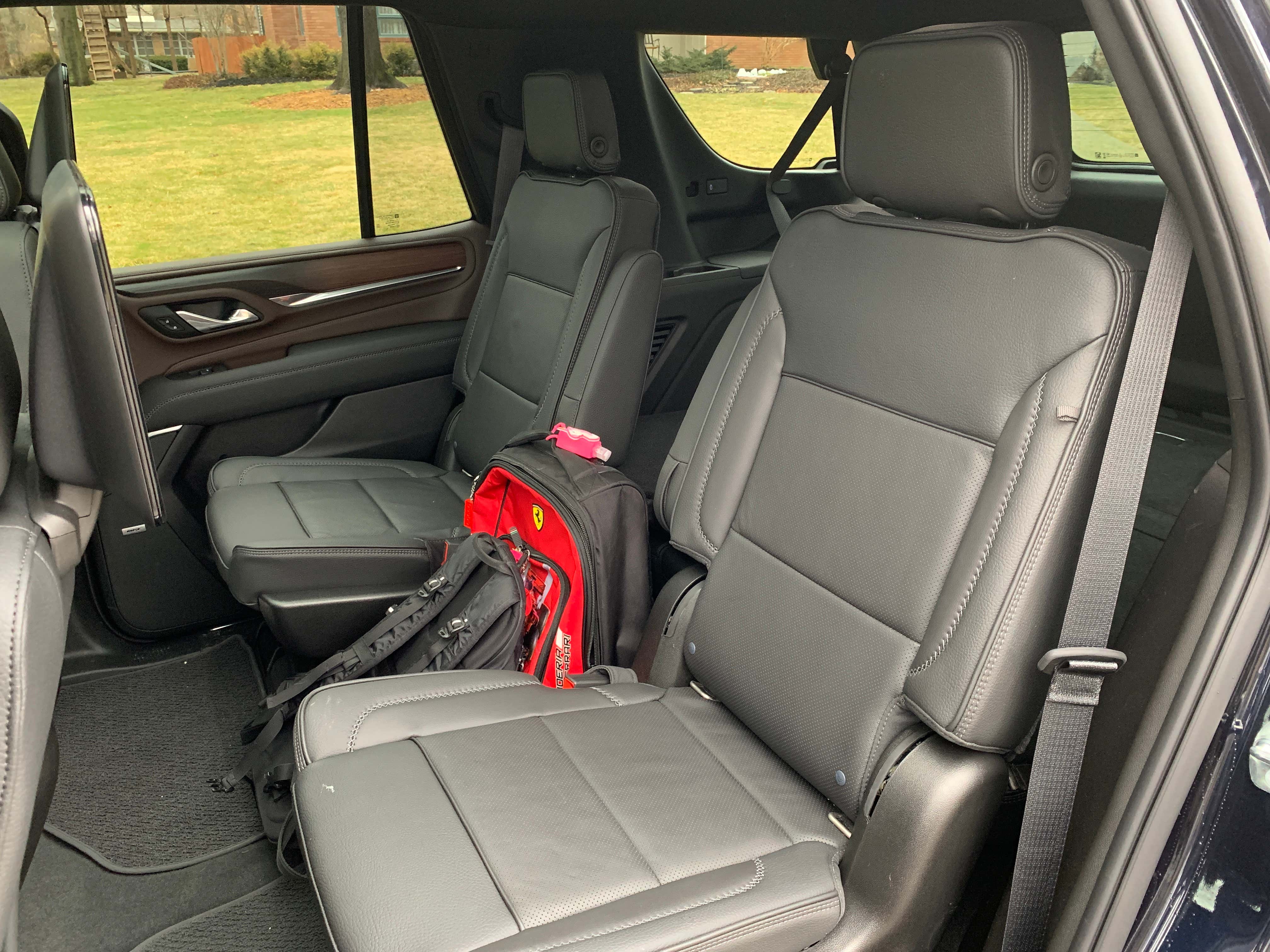 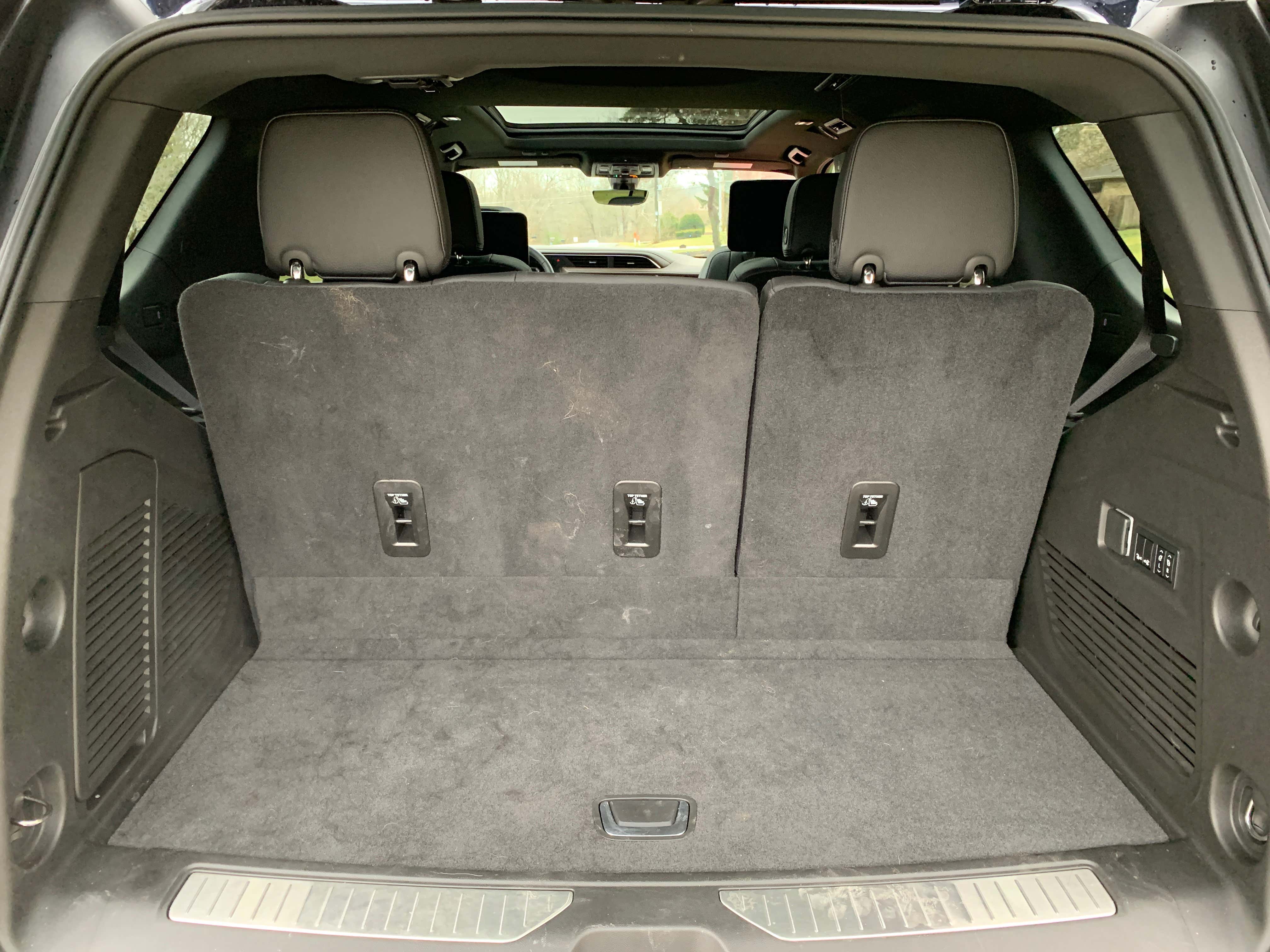 Twelve cupholders are scattered throughout, all the way from the doors, center consoles, and armrests, while a plethora of traditional USB, USB-C, and 12V power outlets adorn the cabin. This unit was equipped with the Rear Seat Media Center (included in the $11,255 Denali Ultimate Package), which is essentially dual 12.6-inch touchscreens in the back, and just like in the Tahoe I drove, it’s just as useless. It doesn’t even include a Blu-Ray player (or any other video source), so you must provide your own device, whether it be a disc, video game console, etc. 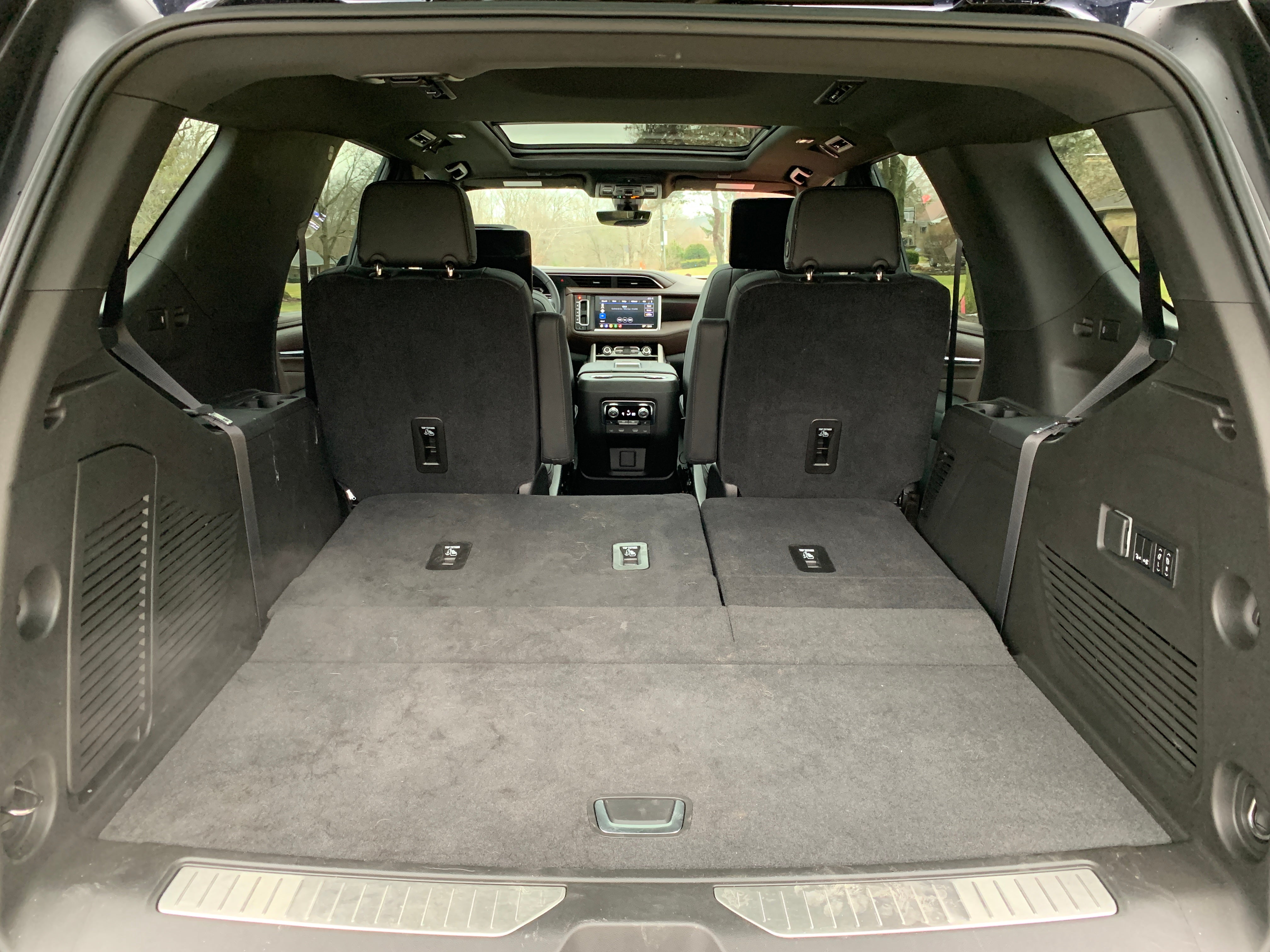 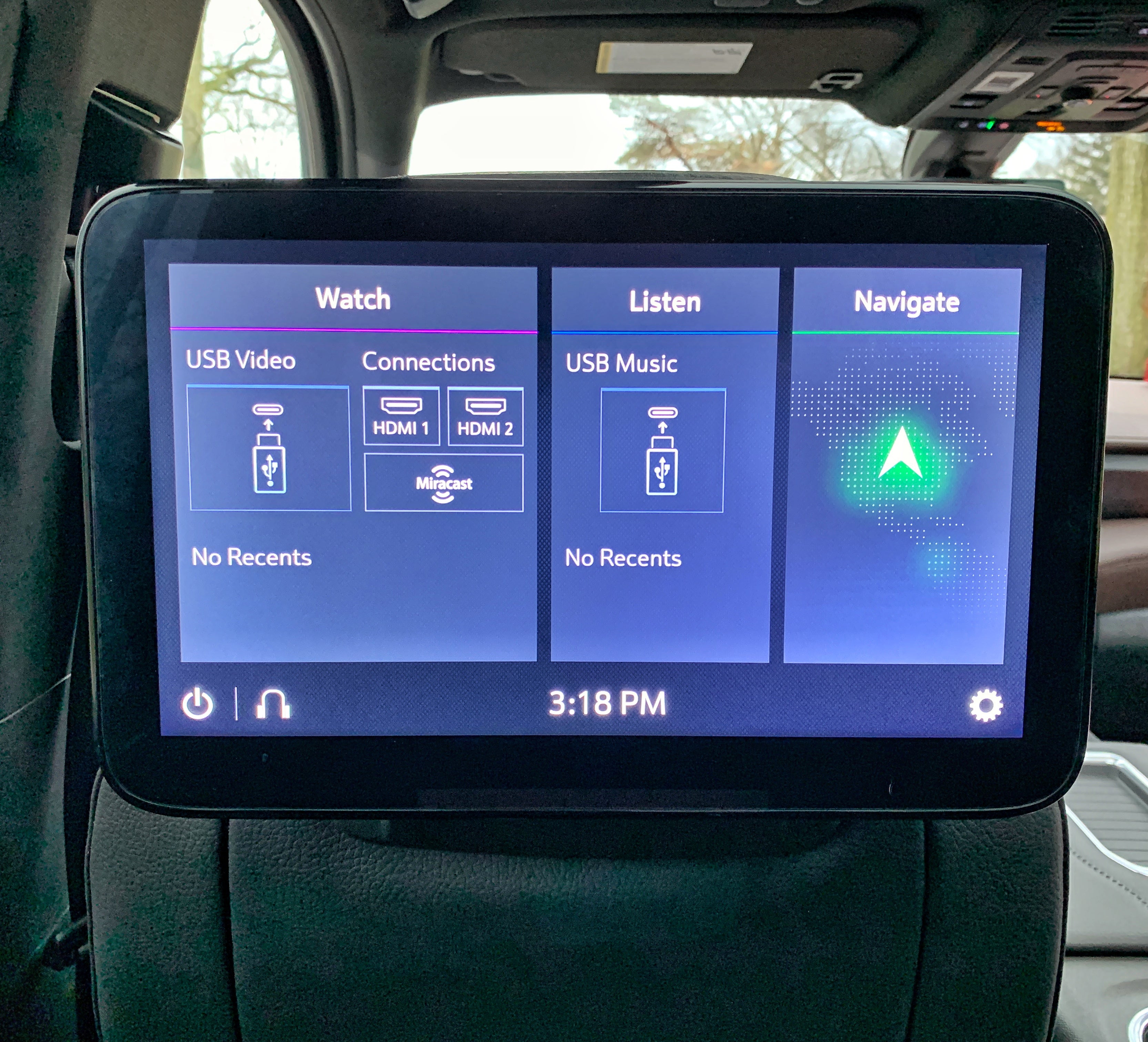 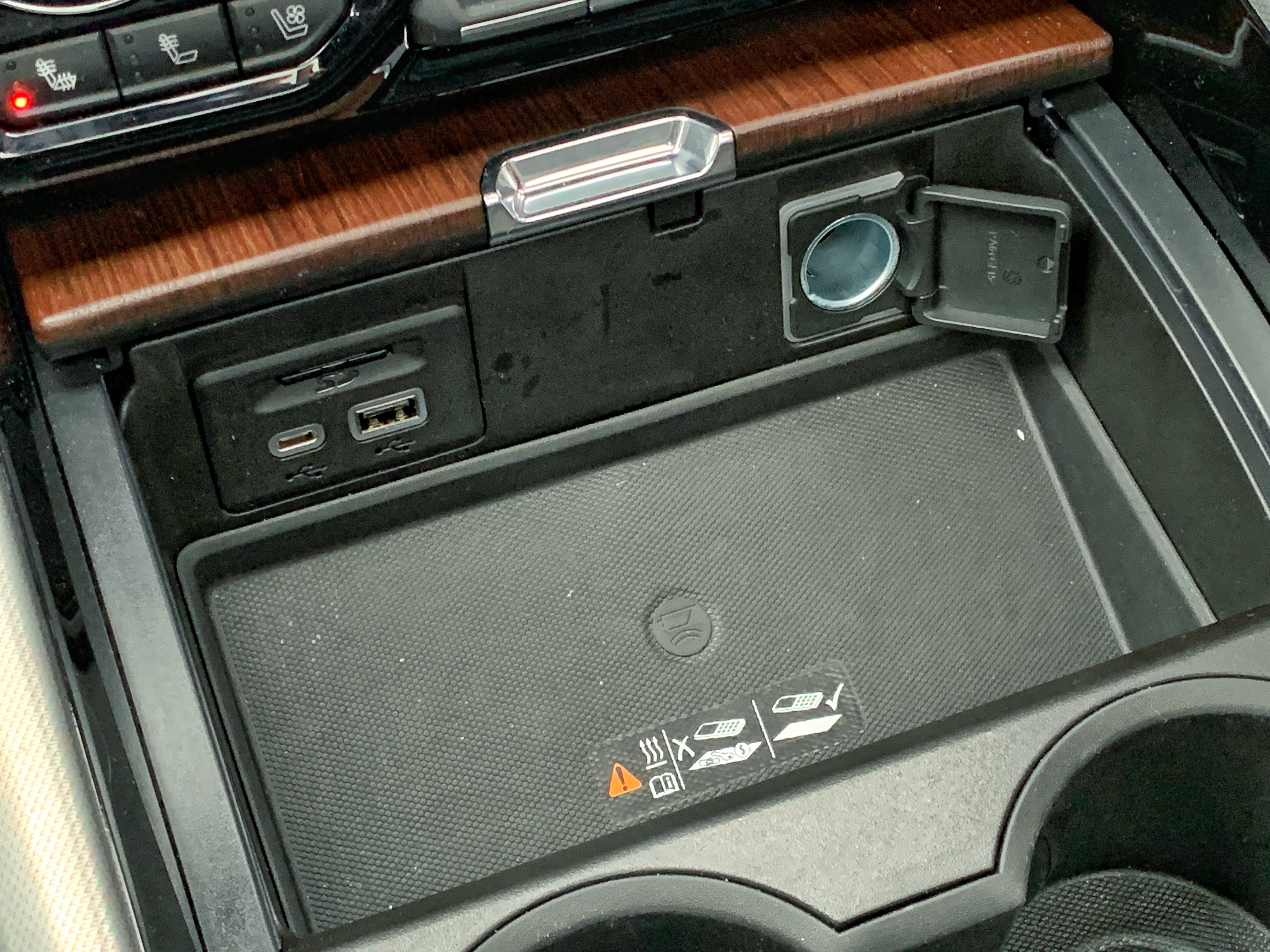 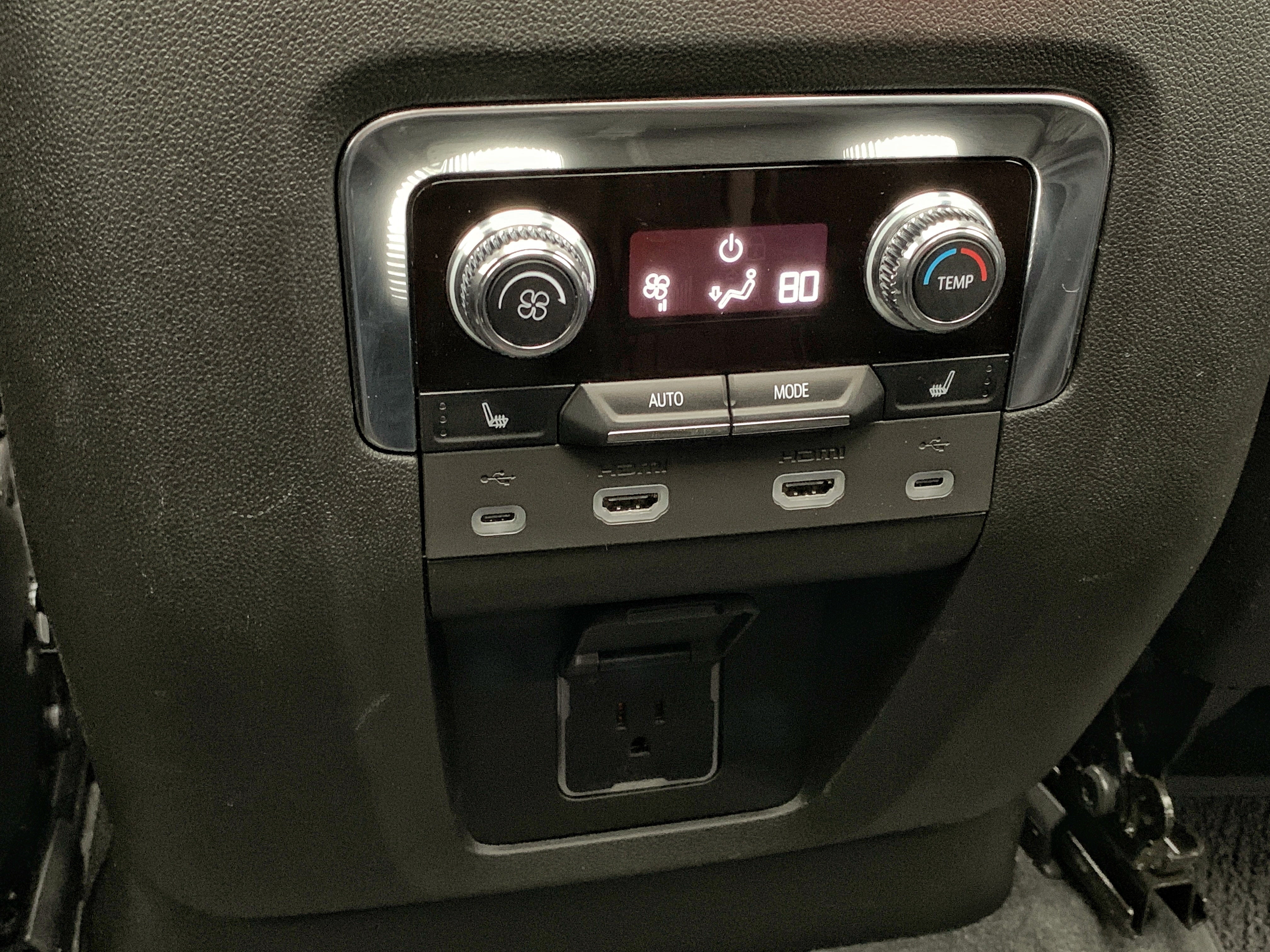 Trunk space is quite generous, with 72.6 cubic feet of cargo space behind the second row and 25.5 behind the third when deployed. Fold both the second and third-row seats to enjoy 122.9 cubit feet of Ikea-loving space.

I walked away from my weeklong test with mixed feelings about the Yukon Denali. On one hand, it’s a great SUV that’s a joy to drive and an even better family hauler. On the other hand, nothing about it convinces me to spend $14,000 more on it than on the Tahoe I’ve mentioned throughout this review. Sure, the Denali looks handsome and is a bit smoother around the edges, but that’s hardly worth several hundred dollars more per month to me.

If driving a Chevy is a no-no at your country club, then the Denali is the one for you. If you’re just looking to get the most bang for the buck, then the Chevy will most likely meet all of your needs and wants. If you want value but still care to look fancier at the school pick-up line, then perhaps a non-Denali Yukon will do the trick.

Perhaps the best part is that, in the end, regardless of whether you choose the Tahoe, the Yukon, or the Yukon Denali, you’ll still end up with what’s arguably the finest three-row American SUV in the land.

Email the author at [email protected]