The car subscription service is a concept automakers are still trying to work out as an alternative to traditional ownership or leasing, but there have already been some early flameouts from prominent players. Cadillac had placed its Book by Cadillac on hiatus years ago but is now trying to relaunch it in a different format, while BMW, Mercedes-Benz, and Audi had all thrown in the towel here in the past year, and for reasons that seemed unrelated to the pandemic (though it couldn’t have helped). Care by Volvo, on the other hand, is staying put for the moment, amid company plans to expand this usage model in the near future.

Automakers cite a long list of issues they’ve experienced with these services, including difficulty in striking a balance between the amount of labor required on the part of dealerships, the high prices charged to consumers, and the actual demand in each geographic area.

One type of subscription service currently operating in the UK is a little different in that it’s not automaker-run, but is an independent, third-party service that owns the cars it offers. And they’re all EVs.

Onto is the name of this subscription service, and it recently purchased 300 Audi e-tron SUVs that it will offer subscribers with free charging, insurance, servicing, breakdown coverage, and up to a 1,000 miles worth of charging per month from BP Pulse and Shell Recharge stations, all for a monthly fee of £1,299 ($1,820). We should note at this point that the e-tron is in the most expensive category of EVs offered by Onto, and by a long stretch.

One advertised upside for subscribers—aside from not having to purchase insurance separately and having their charging costs covered—is the lack of a deposit, as required in a typical lease agreement. There’s only a small delivery fee to get your first car. Another upside is flexibility; the term of the subscription can be as short as one month, and the ability to initiate a subscription via an app eliminates what can be a lengthy purchase and insurance-shopping process. And there aren’t even car keys involved—vehicles can be unlocked and started via the Onto app (which sounds like a good incentive to always keep one’s phone charged).

What’s left to be seen is whether this kind of subscription model can win over users and turn a profit.

“Although it’s an increasingly unfounded viewpoint, electrification and additional complication still go hand in hand in the eyes of many drivers, so our involvement with Onto will be valuable as a means of dismantling as many perceived obstacles to EV ownership and usage as possible,” said Director of Audi UK Andrew Doyle.

As a concept for drivers, subscription services still have a long way to go, and certainly aren’t for every wallet and usage pattern. That’s largely why Onto offers less expensive electric vehicles like the Renault Zoe for £339 ($470) a month, the Nissan Leaf for £449 ($624) a month, the Hyundai Ioniq for £419 ($582) a month, and the Peugeot E-208 hatch for £449 ($624) a month. These monthly subscription prices are far easier to digest than the monthly price for, say, a long-range Tesla Model 3 offered for £999 ($1,387) a month, which is in the second most expensive category in the company’s lineup, after the e-Tron.

“Onto’s acquisition of 300 Audi e-trons is one of the largest corporate BEV purchase commitments we have seen so far, and supplements an EV fleet which is already the most extensive in the UK,” Doyle added. “This acutely convenience-focused service has real potential to be a key driver of attitudinal change and broader integration of more environmentally compatible mobility.”

Of course, if it’s just the convenience of using an EV for a few months you’re after, rather than specifically an Audi e-tron, one of the Renault Zoes could make sense for some drivers. Other cars in the stable, like the Tesla Model 3, are not all that expensive to buy outright, but European drivers have a greater choice of small EVs at the moment, making the Tesla a more of a luxury option, relatively speaking. 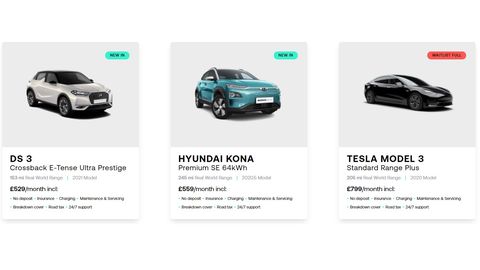 The bigger long-term question is whether this business model, offering a choice of different EVs from different brands, will make a better sense to drivers rather than owning or leasing an EV for a longer term. It’s a shift in consumer thinking and demand that has yet to materialize on a larger scale, which is why we’ve seen so many automaker-operated subscription services fold up shop. One built-in advantage that Onto has at the moment is that being based in the UK, it’s not dealing with a vast geographic region—and the UK already has a high rate of EV adoption. A much larger geographic area, like in the US, carries much higher operating costs and would effectively lock out users who don’t live in a given metro area.

Would you be more likely to try a car subscription service that offered different EVs from multiple automakers, rather than just one automaker? Let us know in the comments below.