Amid reports of an Apple car in the works—with Hyundai expected to do the heavy lifting—the mere idea of an Apple car had arguably passed the marketing smell test years ago when numerous renderings of what such a thing could look like emerged. The result of those trial balloons seemed to be that a lot of people would buy a car from Apple if it offered such a thing, without a thought of logistical issues of sales or service. Of course, sales could be handled online, as for almost everything else these days, and service locations go be built regionally, starting with large metro areas that already have a lot of EVs. A car carrier would pull up outside your home and offload your Apple car—a concept scarcely imaginable a decade ago but now far more familiar thanks to Tesla.

Amid the recurring media hubbub over imagined and imaginary Apple cars, it’s easy to overlook the fact that a year ago Sony had rounded up a large number of friends in the tech and auto sector and had produced a working prototype of a midsize electric sedan. And the tech giant brought the resulting, uh, consumer electronic to last year’s Consumer Electronics Show in Las Vegas, easily stealing the show with its surprise debut, all the while denying it wanted to get into the car business at all.

The sedan, sized cleverly between the Tesla Model 3 and the Model S, featured a platform developer by longtime supplier and auto manufacturer Magna Steyr—not quite a household name, unless your household has a G-Wagen—with internal bits by ZF, Nvidia, Qualcomm, Continental, Bosch, and others. It was truly an international effort, and unlike other “mobility” vaporware seen all too regularly at CES, it looked realistic and production ready, as if it had been designed and engineered by companies that had been doing this for a while. And in a way, it was. 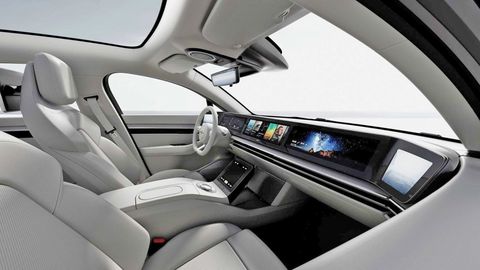 The Sony S-EV sedan was powered by two 268-hp motors, producing for a combined 536 hp, offering 4.8-second launches from 0 to 62 mph and a top speed of 149 mph. Among the important specs that weren’t mentioned at the time were the battery capacity, range, and an idea of what such a thing could cost if it were offered. But the interior looked very complete and very comfortable, with a wraparound touchscreen developed by Sony and its partners, and an interior that oozed quality. As a number of those who spent time around it noted, there was nothing whimsical or too advanced for its own good about the car, with the sedan appearing surprisingly realistic in all aspects, having been assembled with a lot of off-the-shelf tech from multiple suppliers. And just like Tesla, it offered a suite of sensors and a semi-autonomous driver-assist system, also developed by Sony’s supplier partners in the project.

Overall, the sedan looked primed to be greenlit.

But then again, Sony itself is not an automaker (Magna has been for decades). Would car buyers feel comfortable buying a car from Sony as they are buying a laptop or some other appliance sight unseen?

To be sure, many Japanese industrial giants, including those that make cars, aren’t solely automakers. Subaru’s parent company produces a lot of large and small things, as do Mitsubishi and Honda. And when it comes to Mitsubishi, cars aren’t even its main business. So the idea of Sony getting into car manufacturing might seem radical at first blush, at least on this side of the Pacific, but it wouldn’t be the first instance of an industrial giant also offering cars, especially when a lot of other Japanese automakers are taking their time getting into the EV game.

Sign up for comments and let us know your thoughts about Sony as a possible car brand in the comments below.