Just days after Volvo’s onetime in-house tuner and current electric sub-brand Polestar announced plans to go public via a SPAC with an expected value of $20 billion, the Swedish brand itself is planning its own public listing. The automaker has been majority-owned by China’s Geely since leaving Ford’s Premier Automotive Group (PAG) about a decade ago, which at the time also included Jaguar and Aston Martin, among others. Geely acquired Volvo for merely $1.8 billion at the time.

The planned Nasdaq listing in Stockholm is aimed quite directly at Volvo’s transformation into an EV maker, with current plans to drop internal combustion engines by 2030. But there are no plans by the company to be listed in the US.

“There is no long-term future for cars with an internal combustion engine,” Henrik Green, the automaker’s chief technology officer said earlier this year. “We are firmly committed to becoming an electric-only car maker and the transition should happen by 2030. It will allow us to meet the expectations of our customers and be a part of the solution when it comes to fighting climate change.”

Volvo’s goals with the planned listing in Sweden are far more limited than Polestar’s SPAC, with the automaker aiming to raise only about $2.9 billion via the listing. But this amount should nevertheless help it launch new EV platforms later in the decade, following up on its first and second electric models, the latest of which will go on sale in a matter of weeks.

It’s not lost on industry watchers that $2.9 billion by itself won’t be the decisive factor in Volvo’s transition to an all-EV lineup. 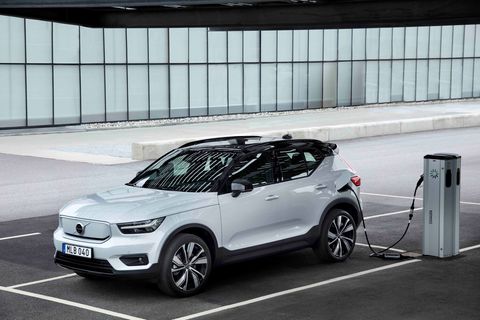 “Volvo’s commitment to a full-electric lineup by the closeout of this decade is likely attainable even without this recent IPO move, but opening things up to outside investors is now only going to streamline this,” Robby DeGraff, industry analyst at AutoPacific told Autoweek. “As we’ve seen in recent years, there are a lot of folks who want to dedicate their money towards companies who are putting the longevity of our planet first. There’s a really good feeling about investing in an automaker, especially one as humble as Volvo, that wants to continue scaling back its carbon footprint, explore new ways of sustainability, and lead the way for a bright EV-only future.”

Volvo intends for 50% of its global sales to be battery-electric by 2025, so achieving even this dramatic share of EVs in its lineup is not far on the horizon, compared to how some other automakers are moving. This means that the XC40 Recharge and the C40 Recharge will soon be joined by other EVs, with an electric version of the XC90 SUV expected next year, before EVs in other segments begin joining the lineup, including sedans.

It’s worth noting that sedans of all sizes are segments that Volvo has largely left up to other brands within Geely, while steering clear of large, battery-electric luxury sedans, an over-served segment at the moment. The Polestar 2, meanwhile, is a midsize sedan aimed at the Tesla Model 3, while the Polestar 5 will set its sights on the Mercedes EQS when it arrives in a few years.

So Volvo is certainly letting its electric sub-brand fill out some blank spots of an electric-only lineup, which is where Polestar’s SPAC move should prove to be quite significant over the coming years.

“The shift has already started with Volvo’s slew of plug-in hybrids plus the XC40 and C40 Recharge pure-electrics, but there’s a long road ahead with a lot of work to be done,” DeGraff added. “Going the IPO route should gift Volvo $2.86 billion that can be directed towards things like crucial R&D needed to introduce other EV versions of the brand’s best sellers like the XC60 and three-row XC90. Not to forget, with the brand’s domestic assembly plant here in South Carolina ramping up for more EV production, this IPO should assist in those preparations as well.”