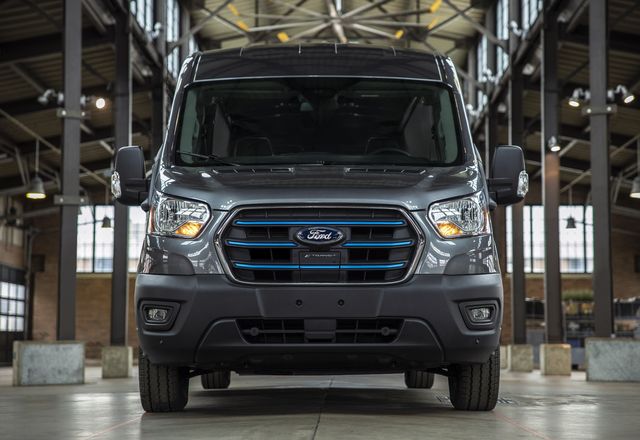 We talk a lot about the race to electrification in passenger cars, but just as important is the delivery vehicles’ electrification race. Early last month Amazon revealed its first electric vans built in partnership with Rivian. And Tesla is always working on the next big thing, but yesterday Ford debuted it’s first attempt with all-electric E-Transit Van.

The E-Transit will come in three heights and three lengths, plus chassis and cutaway models, deliver 266 hp and 317 lb-ft of torque and have an estimated 126-mile range. Ford says it will cost less than $45,000 when it goes on sale late in 2021.

The Transit name has been kicking around for 55 years now, mostly in Europe. The latest model offers the same interior cargo dimensions and mounting points as the gas-powered model, meaning upfitters will continue to transform these vans into whatever the customer sees fit. Ford says most Transits sold last year had upfitting in some form. The brand also notes that 13 such outfits are within 30 miles of the assembly plant in Missouri, meaning customers don’t have to take delivery before their E-Transit is customized; they go right to the upfitter. 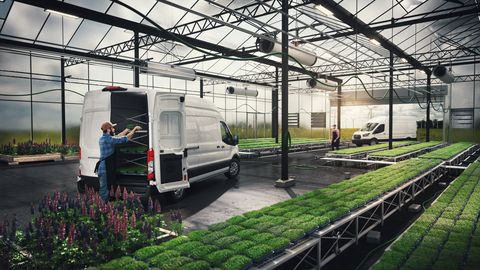 With cities around the world looking to reduce or eliminate gas-powered vehicles within their boundaries, the need for clean delivery vans is high. Ford itself plans to achieve carbon neutrality globally by 2050, and commercial vehicles are obviously part of that.

As we know electric vehicles have a lower maintenance cost than their counterparts, and Ford says maintenance on the E-Transit will cost 40 percent less than the standard Transit. It also comes with an eight-year, 100,000-mile warranty. 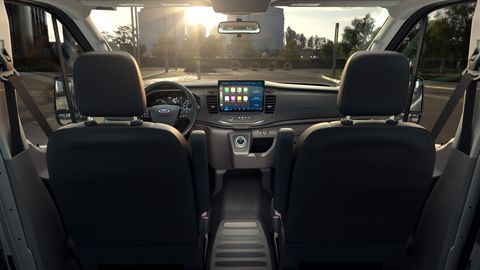 The E-Transit accepts both AC and DC charging and comes standard with the Ford Mobile Charger, working with 120- and 240-volt home outlets. “Those seeking the fastest home charging solution can purchase the Ford Connected Charge Station, which can fully charge E-Transit in eight hours.” On a 115-plus-kW DC fast charger, the low-roof models can gain 30 miles of range in 10 minutes or 45 miles in 15. On a 240-volt it will gain about 10 miles of range per hour. If you’re working from home, you might want the Ford Connected Charge Station ($799).

It’s also important to note, delivery trucks and vans spend on average 25 percent of their day idling. The E-Transit will be consuming exactly zero energy during those times.

Like the Ford F-150 pickup, the E-Transit can be optioned with the Pro Power Onboard package, turning the vehicle into a mobile generator. With 2.4 kW of power it can handle saws, sanders and whatever else you need on the job site. 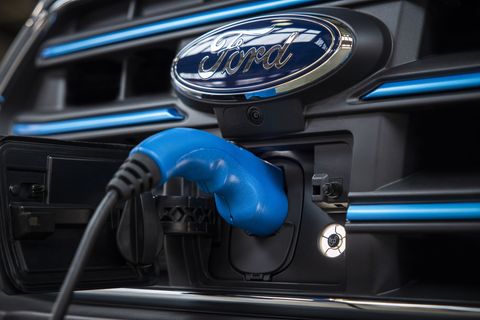 Fleet companies can use the standard 4G LTE modem to keep track of their assets. Also on the tech front, the Transit gets a 12-inch touchscreen standard with the Sync 4 operating system, as well as Ford CoPilot360 with lane keeping and emergency braking.

The biggest E-Transit will swallow 487 cubic feet of cargo weighing up to 3,800 pounds. That payload compares favorably to the T-150, is about equal to the T-250 version and a little bit less than the highest rated T-350 grade gas-powered Transits. We asked Ford about range when loaded.

“Commercial customers have unique needs depending on their industry and the tools and equipment they carry, so range will vary by payload. We have learned from our analysis of 30 million miles of telematics data determining customers in industries with planned, pre-determined city routes drive on average 74 miles per day in the U.S.,” says Ford. “Our range has been purpose built to maximize capability while not providing more battery than what these customers need to pay for, creating the most affordable cost of ownership possible.”

So basically, these vans will have an extra 50 miles of range from what their customers need, which should soak up at least some of that range decrease when fully loaded.

Look for the 2022 Ford E-Transit on the road late next year.