According to detailed calculations by Jon Stewart (Cleanerwatt), the all-new Tesla Semi is twice as efficient as the Ford F-150 pickup truck. Keep in mind, a Class 8 semi-truck weighs in at four to five times that of a gas- or diesel-powered F-150.

Tesla is known for producing some of the most efficient vehicles on the road today, and the most efficient cars ever built. While a few rivals have come to market with similar successes, most other EVs aren’t nearly as efficient as Tesla’s, they have less driving range, and they’ll cost you more to fuel.

When Tesla set out to produce a commercial vehicle, you’d better bet it was laser-focused on range and efficiency. However, the automaker likely wouldn’t have even attempted to produce a long-range semi-truck if it hadn’t already proven that it could work its magic to make the most aerodynamic, electron-sipping vehicles in many shapes and sizes.

Tesla already demonstrated that the Semi could travel 500 miles on a single charge. In fact, the test run started with a battery capacity of 97 percent and ended with 4 percent remaining, so it pulled off 500 miles with 93 percent of its battery capacity. Meanwhile, the hauler’s combined weight at the time was a whopping 81,000 pounds.

Cleanerwatt converted the 1.7 kWh/mi to MPGe to make a comparison between the Tesla Semi and Ford F-150. It’s a bit tricky, and there’s some obvious math involved, but he came up with 20 MPGe for the Tesla Semi. The F-150 and many other popular full-size four-wheel-drive gas-powered pickup trucks return around 19 mpg. 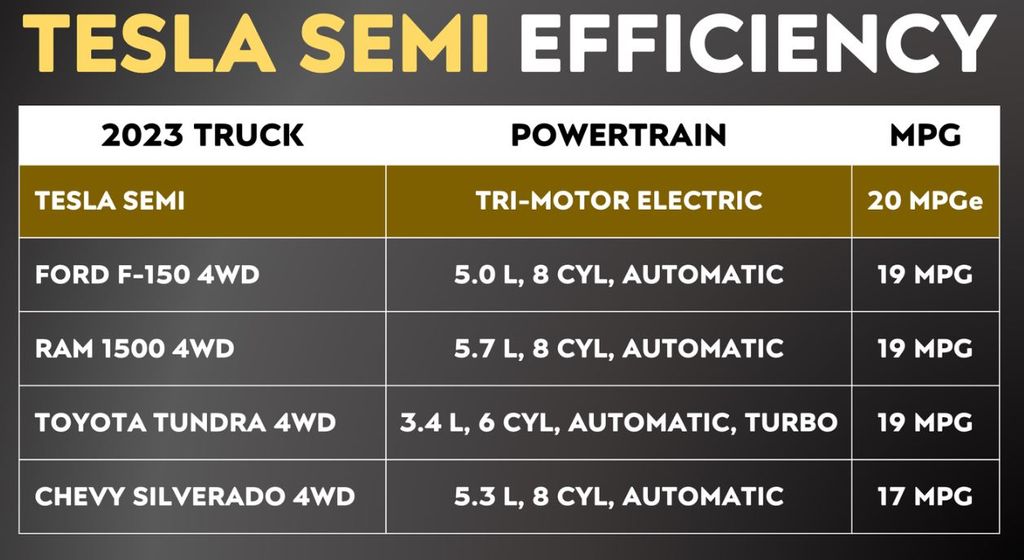 The above calculations and chart may have you wondering how the Tesla Semi is twice as efficient as these trucks since it only appears to be slightly more efficient. However, Cleanerwatt points out that the numbers for the Tesla hauler are calculated when it’s fully loaded (82,000 pounds), which isn’t the case with the EPA’s figures for the other trucks. He goes on the provide insight into towing efficiency and more.

Check out the video for all the details. If you’re interested in learning even more, visit the second source link to see Cleanerwatt’s article on the topic. It has many more details and additional charts, much like the one above. Once you’ve taken it all in, scroll down and leave us a comment.