Never letting a quarterly financial call go to waste or be boring, Tesla used this week’s earnings presentation to unveil long-awaited updates to the Model S, which has now been in production since 2012.

The electric sedan was shown with a tweaked front fascia that may or may not be noticed right away by those who don’t actually own a Model S, but the main course was inside where a redesigned cabin included a yoke-style steering wheel. The refreshed interior also introduced a landscape-oriented touchscreen and a new screen for rear-seat passengers… but it’s safe to say that the main event was the yoke-style steering wheel.

The steering wheel may certainly look cool at first glance, but it’s another question of just how practical it would be to use on a daily basis, and how much training it could require to get used to it. It may remind some of the steering in KITT from Knight Rider, but if an owner was delivered a Tesla and started driving it like a regular car in traffic the learning curve could be steep, we suspect. However, Tesla has certainly shown a very high tolerance for adopting technology that could do “the worst thing at the worst time,” as the company described the rollout of Full Self-Driving just a few weeks ago. 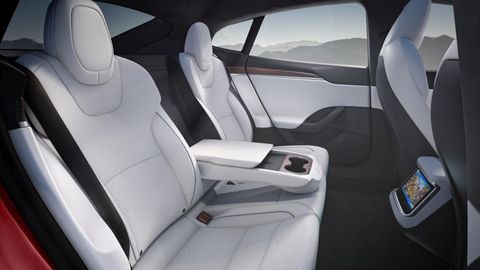 Focusing on the Cessna-style steering it’s easy to miss something else that has changed: There are no stalks on the steering column, with Tesla having moved the blinker function to buttons on the steering wheel. Just how comfortable that change will be is a separate question as well, but perhaps it’s prudent to point out that other automakers haven’t done this despite buttons being cheaper and simpler to attach to steering wheels. So perhaps there are ergonomic reasons for why not everything is a button.

Of course, the bigger question is whether Tesla will actually force this on buyers when the updated Model S rolls out next month, or whether it will be an option alongside a traditional wheel. At the moment it appears that the latter could be the case — the yoke-style wheel could be an option for those who want it, alongside a regular steering wheel. 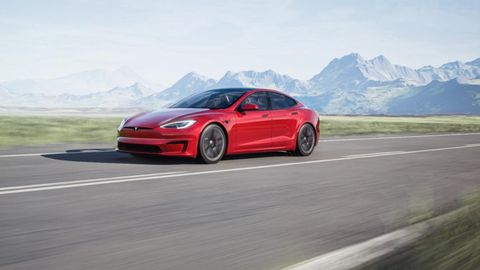 The new and wild steering wheel almost eclipsed another bit of Model S news this week, as the sedan will be offered in a tri-motor version called Model S Plaid, and a Model S Plaid Plus with a 520-mile range. That’s right — 520 miles of range — rolled out as an arms race in EV range is heating and as other long-range EVs are about to hit the market. To top it all off, the Plaid Plus will rip from 0 to 60 in under two seconds thanks to an 1,100-hp output, and will continue up to a top speed of 200 mph. (Please don’t try this on public roads).

But even the base dual-motor version won’t be staying put when it comes to pricing. Tesla is hiking its price up by over $10,000, with the Model S Long Range now starting at $79,990. This is now the least expensive Model S you can buy new, so for once recent buyers won’t be complaining about having bought a Model S just before its price dropped. But, they could still complain about having bought a Tesla just weeks before the yoke and the exterior updates have shipped.

Would you prefer a yoke-style steering in a sedan, or is the round wheel the way to go?