Tesla is in a process of significant expansion of its manufacturing infrastructure, building three new and huge plants on three continents simultaneously and upgrading the existing ones.

The annual peak output is already beyond 800,000 annually, and that’s not even including the soon to be launched Model Y line in China.

“We have recently increased capacity of Model 3 / Model Y to 500,000 units a year. In order to do this, we restarted our second paint shop, installed the largest diecasting machine in the world and upgraded our Model Y general assembly line. Production should reach full capacity toward the end of this year or beginning of next year.”

According to the Q3 report, the Tesla Gigafactory 3 plant, after the latest investment and upgrades, can now produce up to 250,000 Model 3 per year – “achieving its designed production rate”.

We guess that the Model Y will match the Model 3 output, but it will take a year or so.

“Model 3 production capacity has increased to 250,000 units a year. We reduced the price of Model 3 to 249,900 RMB after incentives, making it the lowest-price premium mid-sized sedan1 in China. This was enabled both by lower-cost batteries and an increased level of local procurement. As a result of this shift in cost and starting price, we recently added a third production shift to our Model 3 factory.”

Tesla Gigafactory 4, under construction in Grünheide near Berlin in Germany, progresses quickly. According to the schedule, Model Y production will start in 2021. Model 3 to follow.

“Construction of the Gigafactory in Berlin continues to progress rapidly. Buildings are under construction and equipment move-in will start over the coming weeks. At the same time, the Giga Berlin team continues to grow. Production is expected to start in 2021.”

Tesla Giga Texas is under construction in Austin Texas. It’s scheduled to produce Model Y and Cybertruck, but the Semi seems to be unassigned still (see table below). There is no word about the Model 3.

Here is quick look at the site after about three months: 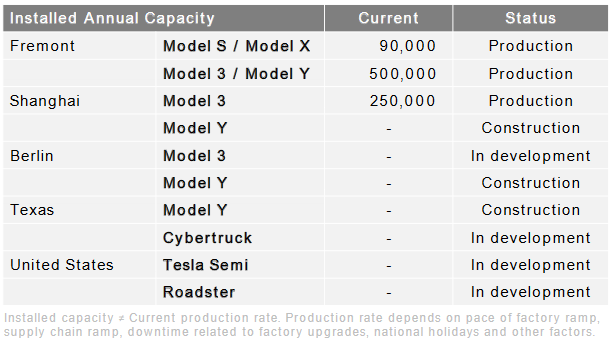 An interesting new chart from Tesla is about delivery percentage of locally-made vehicles. With the Chinese, the company was able to increase the ratio beyond 70%.

It should further improve when the European plant is ready. 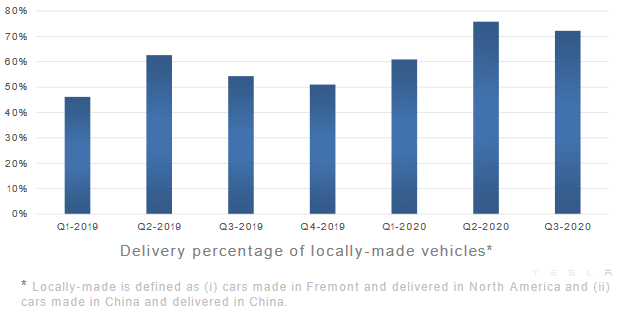