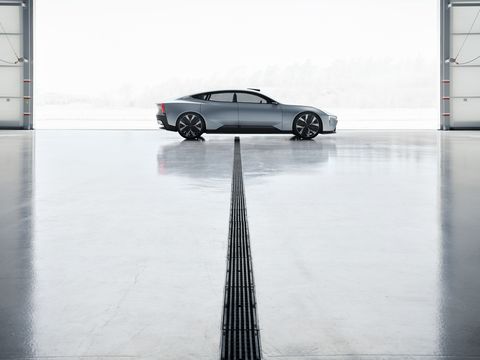 Polestar confirmed it is putting the Precept concept, a car that debuted digitally earlier this year, into production. The Precept is a futuristic, battery electric vehicle that Polestar will assemble at its new Chengdu plant. Called the Polestar Production Center, the Volvo subsidiary claims it to be the first LEED Gold-rated automotive plant in China that runs entirely on renewable energy.

And the swoopy sedan follows suit. The interior is made up of several sustainable materials, including recycle plastic bottles, reclaimed fishing nets, recycled cork vinyl, and a flax-based composite.

“We are committed to reducing the environmental impact of our cars and our business, said Thomas Ingenlath, Polestar CEO, “The aim has to be climate neutrality, even though I recognize that is a long-term goal.”

In other words, feel free to take on any Prius Prime hippie in a who’s carbon footprint is smaller! fight at the bar.

Mechanical details are thin. That said, we wouldn’t be surprised to see a very similar powertrain to the Polestar 2 make its way into the Precept. All-wheel-drive, 408 horsepower, and 487 lb-ft of torque sound like plenty to me. As does the 2’s 78-kwh battery. And we know little about price and arrival date, as well. Once we learn more, we will be eager to share.