With the unveiling of the upcoming Toyota bZ4X electric SUV in prototype form last week, the EV world got it best look at the brand’s first mass-market battery-electric vehicle, one that will enter production in just a few months. The RAV4-sized bZ4X was revealed inside and out along with global specs, promising up to 310 miles of range in the WLTP cycle, and single- and dual-motor layouts, both powered by a 71.4-kWh battery. The SUV, developed along with Subaru and slated to receive a platform-shared version badged as the Subaru Solterra, will kick off Toyota’s EV era, and will be joined by other models from the brand soon.

The reveal of the bZ4X also gave the EV world a look at something that it may or may not have been itching for—yoke-style steering—almost a year after Tesla showed off a similar setup in the refreshed Model S and Model X, which have begun arriving (to mixed reviews) over the summer.

Specifically, some users who’ve tried Tesla’s yoke-style steering have noted that the learning curve can be steep, as the steering does not rotate uniformly around the hub but instead sits lower than its center at rest. Another common gripe was the fact that, unlike in F1 cars, the steering ratio remained the same and required drivers to regrip as they made turns in traffic, but without always finding a surface that was easy to grab. The difference between the yoke in F1 cars and in Tesla cars, as has been pointed out, boils down to the fact that F1 yokes require quite limited inputs, and do not require drivers to make two and a half or even three complete rotations. The steering in F1 cars just isn’t geared like that.

Toyota’s nominal reason for offering the yoke-style steering, believe it or not, was to make the instrument screen more visible. But its own take on the yoke arrived with an electronic steer-by-wire system that will, in fact, alter the steering ratio as needed. Toyota indicated that lock-to-lock, the yoke will only need to be turned 150 degrees—far less that the three complete turns usually required in cars today. Toyota says that the drivers will be able to change the steering characteristics via the drive mode selector, suggesting different settings that will be better suited for different types of driving. 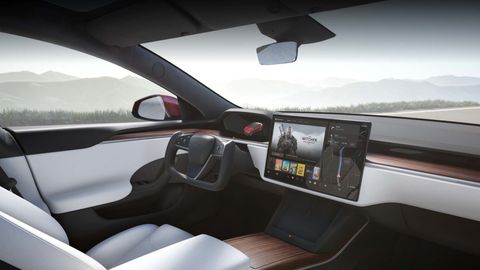 “The steering feeling is improved through independently controlling the steering torque that the driver feels and the steering angle of the tires. Steering characteristics can be changed with drive mode select,” the automaker promised.

Such a system, we suspect, would also need to offer a strong rotational resistance to prevent excessive input at highway speeds, which is also one of the reasons most automakers have not opted to offer yoke-style steering before, even coupled with steer-by-wire systems.

Of course, as “solved” as this issue may seem, we have to wonder just how users will get used to switching between steering ratio settings every day, so it remains to be seen just how well this system will be received by users who opt for it.

Toyota also claims that the steer-by-wire system will block “vibrations” from tires, which is another issue that we didn’t know needed solving in this manner.

“System controls tire movement to ensure vehicle stability when driving on uneven surfaces or when Lane Tracing Assist is activated,” the automaker adds. 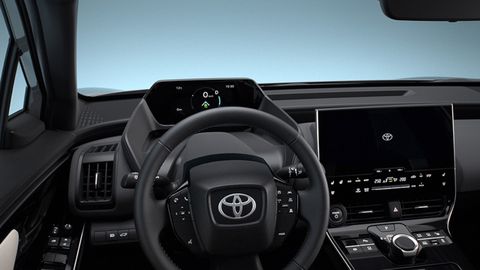 Toyota also claims that the one-grip motion will result in more available legroom, as well as easier ingress and egress.

Steer-by-wire systems by themselves will not appear for the first time with this Toyota SUV, as in the recent past Infiniti was the one that introduced the most modern iteration of this concept to the mass market. The Infiniti Q50 introduced such a system in 2013, and a fairly complex one at that, with a fail-safe mechanical clutch that could connect to the steering in the event of an electronic failure. But such systems have not really caught on industry-wide, with equipment costs being one of the main hurdles. If it’s not a system that buyers are clamoring for, the thinking goes, developing it and adding it to vehicles introduces new costs that someone has to foot at the end of the day.

If you’re itching to try this system out at the dealer, you may have to wait a while. Toyota will offer this system first in China before other markets, so there’s no guarantee it will make it stateside. But given the fact that Tesla seemingly started the yoke fad (if it is indeed a fad), we’d have to believe it’ll make it here eventually.