Henrik Fisker’s electric startup made some waves (while also prompting a few eye-rolls) a little under a year ago when it unveiled the Ocean SUV, promising a 300-mile range and a modest price. The company, Fisker’s second automaker on paper, took the wraps off the Ocean at last year’s CES in Las Vegas, showing a running prototype with a 37,499 starting price, a vegan interior and a solar roof. The SUV also promised a “California Mode” that rolls down all the nine windows, including the ones between the C and D pillars — a rarity in automotive architecture.

For what it’s worth the SUV did seem real, in the sense that it wasn’t a static plastic model on a show stand. Fisker showed off a running prototype with its own platform looking production ready. Seemingly everything appeared ready, except for one thing: the factory to produce it.

Since these things require a footprint and hundreds of suppliers, Fisker was not going to build the Ocean in a basement, especially with a $37,499 starting price. In fact, the Ocean isn’t meant to be a low volume, Bristol-style effort at all — Fisker imagines mass manufacture.

The question of what company is going to build the SUV was answered a few days ago: Austria’s supplier giant Magna Steyr will produce the Ocean in Europe, initially on an exclusive basis.

“Magna has a unique position in the industry with its market-leading innovative solutions combined with vehicle assembly capabilities that have produced more than 3.7 million vehicles from 30 different models,” said Frank Klein, President Magna Steyr. “Magna’s proven capabilities, particularly in electric vehicles, form a strong basis to support Fisker with world class engineering and manufacturing of the Fisker Ocean.” 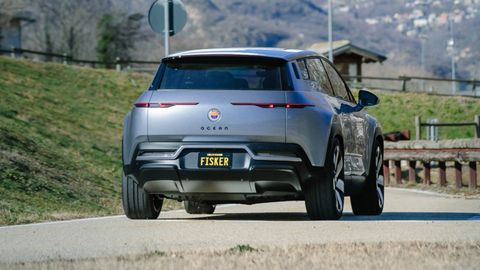 For its huge role in automotive manufacturing Magna Steyr is still far from being a household name in the U.S., so you might remember it best (if at all) for building the Mercedes-Benz G-Class in Graz, Austria. But besides doing a lot of work behind the scenes for numerous automakers, Magna Steyr was also in the news recently for a Sony-branded sedan that seemed to come out of left field. Magna essentially built a newly-designed EV prototype along with several supplier partners, and made it seem very casual and production-ready, showcasing its prototyping and engineering potential.

What’s curious about the Fisker deal is that the Ocean will use Magna’s own “EV architecture” along with the Fisker-Flexible Platform Adaptive Design (FF-PAD). It appears the engineering behind it won’t be entirely Fisker’s coupled with off-the-shelf items from outside suppliers with Magna just doing the car’s assembly. At the very least the hardware Magna showcased in the Sony car could have been a timely preview of the EV-building ability it is offering to manufacturers.

Of course it remains to be seen if Fisker can stick to its planned starting price for this model as well as several other planned specs, as the company has made some ambitious claims in the past. But one good outcome of this deal is that buyers probably won’t have to worry about assembly quality because an EV startup won’t be learning about manufacturing from scratch.

“We are very happy to be able to work with Fisker on such an exciting, sustainable product and to see what additional opportunities this cooperation may bring,” said Magna president Swamy Kotagiri. “This is a great example of our strategy to leverage our strong portfolio to scale for future mobility needs and utilize our full vehicle engineering and manufacturing capabilities. This is a unique competitive position for us, particularly with new mobility players and OEMs seeking to expand their electrified offerings.”

When does production begin?

If there are no delays — a tall order in the world of EV startups — the Ocean should start rolling out of Magna’s plants in the fourth quarter next year. If you think this timeframe sounds like it could well be 2032 in this day and age, you’re not alone. A lot of things could change in the EV world by then.

Sign up for comments and let us know your thoughts on the Fisker Ocean below.