The difference in the 20-80% SOC window is noticeable.

After the most recent DC fast charging analysis of the Tesla Model 3 Long Range AWD at a Tesla V3 Supercharging station (up to 250 kW), let’s now take a look at the charging results at a general CCS Combo 2 charger in Europe.

In Europe, the Model 3 comes with a CCS Combo 2 compatible charging inlet (for both AC and DC charging), which means that it can use third-party ultra-fast chargers with CCS2 plugs.

Model S/X are equipped with a Type 2 compatible charging inlet (for both AC and DC charging). DC charging is possible at Superchargers or – through an adapter – at CCS2.

Tesla has retrofitted its Supercharging network in Europe with additional CCS2 plugs for the Model 3 and allowed it to charge also at third-party networks at up to 200 kW (in the case of the Long-Range battery version).

In this post, we will check how the CCS2 and V3 SC charging curves compare because the results might be surprising.

Data for the CCS2 charging comes from Fastned charging network (they are very similar to Bjørn Nyland’s charging test at IONITY – see video at the bottom) and from the previous post (Tom Moloughney’s tests).

First of all, the charging curve at CCS2 chargers is different than at the V3 Superchargers. It looks capped through a current limit in the first part.

Charging never exceeds 200 kW (the peak is actually around 195 kW) despite the fact that Fastned’s charger was rated at up to 300 kW.

In effect, in the first part of the session, charging is at a much lower, stable level (slowly growing up to around 40% SOC).

An interesting thing is that while charging at a V3 Supercharger, at some point, the power rapidly decreases. However, at CCS2 it continues normally, exceeding Supercharger output up to 60% SOC or so.

This is the crucial part – probably related mainly to the battery heating at high power of 250 kW. Power must be quickly limited to not exceed temperature limits. In the case of CCS2 charging at a lower level, heating issue is not as big so the charging might continue.

At higher SOC, the difference is marginal. 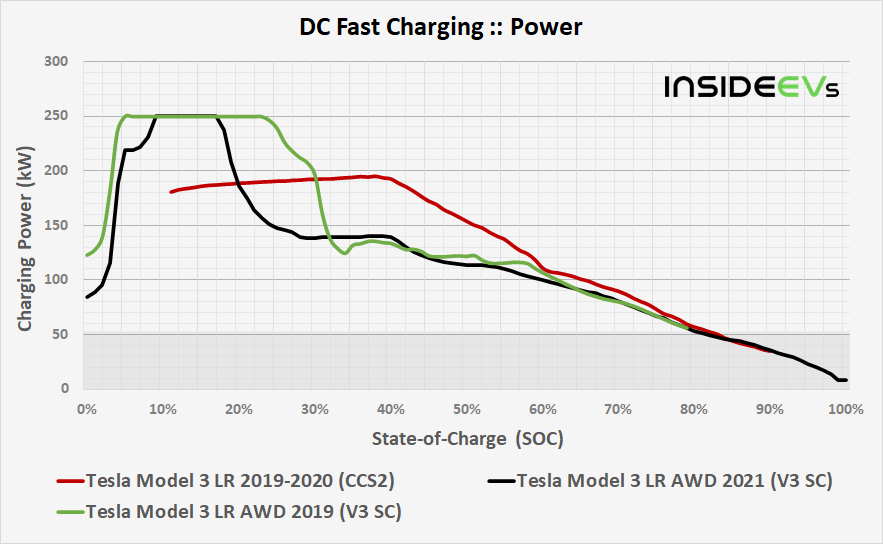 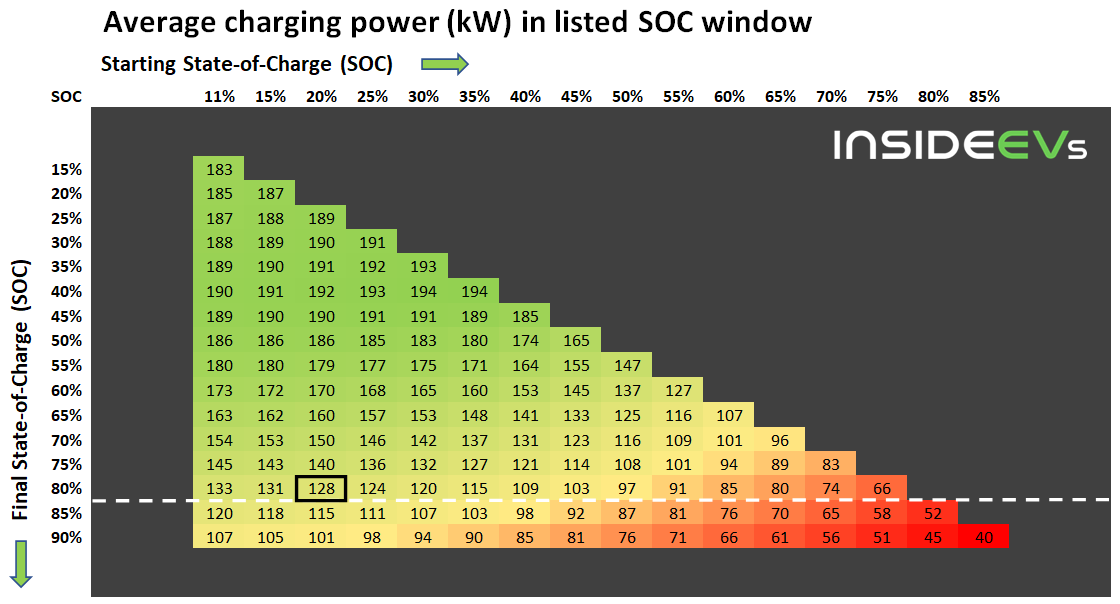 Surely, someone would say that starting at 10% would change the result, but you know what? Not so much.

Having the advantage of 250 kW improves that average, but the CCS2 still wins:

So maybe the manufacturers should not pursue the ultra-high peak charging levels, but just focus on a consistent and ultimately slightly higher average?

As we can see, at CCS2 the battery cells are also under a lower peak load: 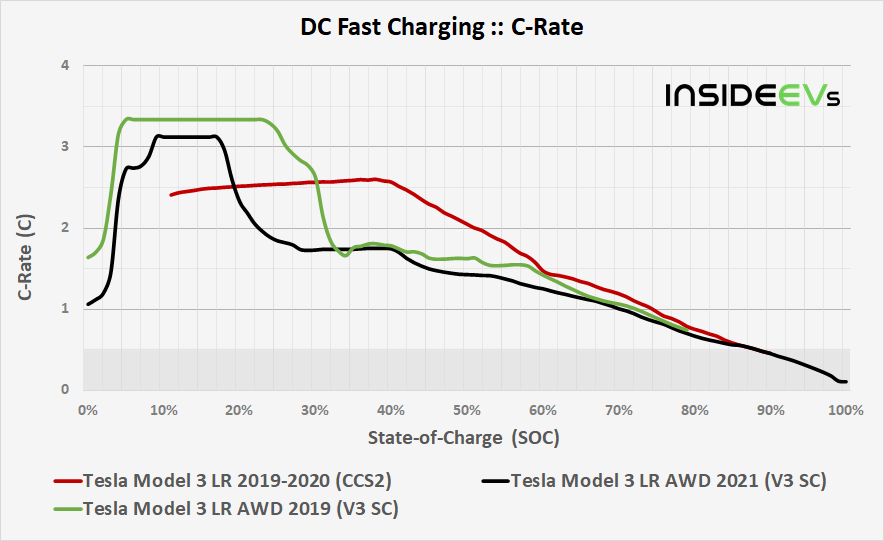 We don’t know how quickly the Model 3 charged from 20% to 80% SOC at Fastned’s CCS2 charger, but it could be a 1-2 minute quicker than at a V3 SC (maybe under 23 minutes). In Bjørn Nyland’s charging test at an IONITY charger, it was roughly 23 minutes.

In other words, another win for the CCS2.

Assuming the individual WLTP range ratings for all of the cars and available battery capacity (often only a guess or indirect measure in an inconsistent way between the cars), we noted that in the 20% to 80% SOC window, the CCS2 appears to be roughly 5-10% quicker. 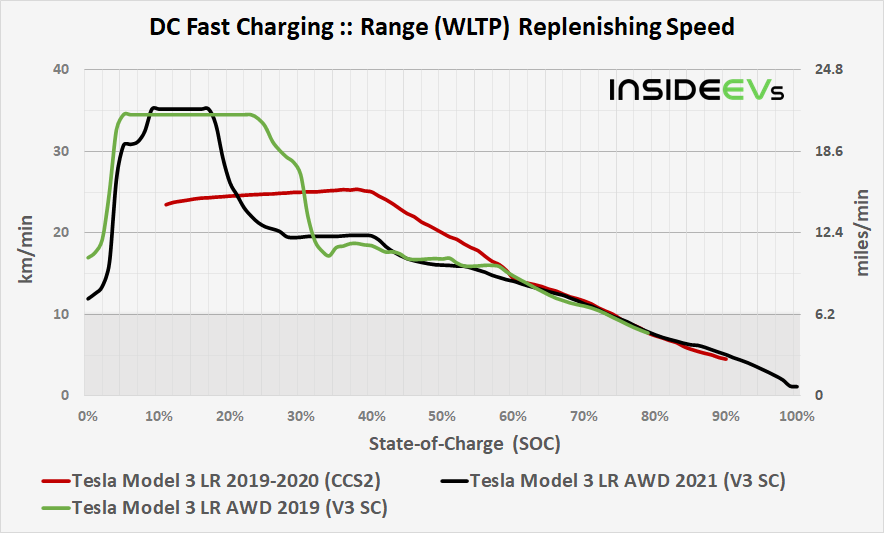 We would not pay much attention to the range replenishing rate numbers though.

The comparison of CCS2 and V3 SC charging curves once again proves that high peak charging values does not guarantee the highest charging speed in popular SOC windows.

Despite that the Tesla Model 3 is not exceeding 200 kW at third-party CCS2 chargers in Europe, it might be actually as fast or even faster than at 250 kW V3 Tesla Superchargers in 20-80% SOC window. That’s a surprise because we expected Superchargers to offer noticeably faster charging due to the limited power on the general CCS2.

We guess that battery heating during the charging process significantly limits the sense of pursuing high peak charging values.

The current strategy appears to be: achieve maximum power value at any given time (and lower it if needed to not exceed the maximum temperature).

Maybe the optimum strategy to achieve the lowest charging time up to 80% SOC would be to glide at a lower level, closer to 200 kW also at V3 Superchargers? It would require taking into account the overall battery profile in the most popular charging windows.

** Temperature of the battery cells might highly negatively affect charging capabilities. We don’t have data about temperatures of the battery at the beginning and during the charging process. In cold or hot weather, as well as after driving very dynamically, charging power might be significantly lower than shown on the charts (in extreme cases charging might be impossible until the battery temperature will not return to an acceptable level).