The electric version of the Ford Transit is just a few months away from first deliveries, following the commercial debut of the Mustang Mach-E and ahead of the arrival of the battery-electric F-150 in 2022.

Due to arrive at dealerships later this year, the E-Transit lineup will first see an appearance on job sites this summer as part of a manufacturer pilot program with key customers in different vocations. The order banks for the E-Transit will open in July, and Ford has shared the preliminary MSRPs for the different versions of the battery-electric commercial van.

The targeted MSRP for the cutaway version of the E-Transit will kick things off at $43,295 before destination, which hasn’t been published yet but is expected to be identical to the gas-engined Transit’s, at $1,695. The E-Transit will also get the benefit of the $7,500 tax credit, which will bring down its final price to around $37,490.

The second lowest-priced version of the E-Transit will be the chassis cab, of course, with a target MSRP of $43,825. Ford hasn’t published the manufacturer-estimated EPA figures for these two most affordable versions yet; all the other cargo van versions—with a choice of three roof heights and three wheelbases—have received estimated EPA numbers, ranging from 108 miles in the high roof, extended-wheelbase version (expected to start at $52,690) to 126 miles in the low roof, regular-wheelbase (about $47,185). A total of eight varieties, including the chassis cab and cutaway versions, will be offered. 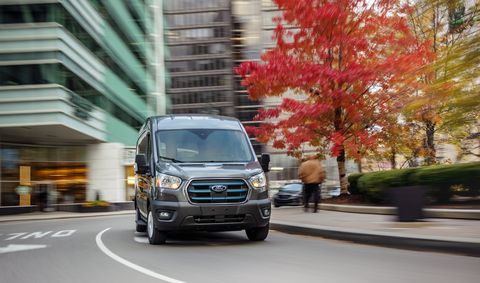 Meanwhile, medium-roof versions of the cargo van in regular and long wheelbases are expected to offer 116 miles of range. All versions of the E-Transit will be powered by a 67-kWh (usable) battery, so the difference in estimated ranges of 108, 116, and 126 miles is due to weight and aerodynamics.

“We’ve had so much interest early on, we wanted to open this registration site to serve customers with a build mix for their needs across all van body styles,” said Ted Cannis, general manager of North American commercial business. “Some customers want high-roof vans to maximize internal cargo space, while others need to install bodies on cutaways and chassis cabs. Customers will have an all-electric solution—from box truck delivery to parking structure-friendly utility service vans and everything in between.”

Ford has launched a site where prospective customers can register their interest in the E-Transit, but the order banks themselves will officially open in about a couple of months.

How big is the market for an E-Transit right now? Share your thoughts on the topic in the comments below.