If you thought that all barns, sheds, and garages in the UK have been checked by now for forgotten or misplaced Aston Martins, we have a once-dynamic duo to show you: a 1973 Aston Martin V8 and a 1971 Aston Martin DBS have just emerged from a barn after decades of slumber, and are now in need of new homes and new restorations. The two will be offered as separate lots by Bonhams Auctions later this month at the MPH May auction in Bicester, UK.

The 1973 Aston Martin V8 in question hails from the fourth year of manufacture of this model, which was designed as a successor to the DB6, launching an era that would span two decades for the automaker. The V8 featured a muscular design and a muscular engine underhood following the long run of inline-six designs, with a 5.3-liter V8 designed by Tadek Marek giving the coupe about 315 hp—in the case of this car paired with an automatic transmission. 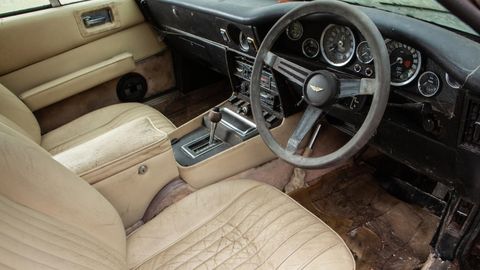 The car that Bonhams will offer later this month has been the property of the consigning owner since 1984, with the current owner being the car’s fourth keeper. This V8 is reported to have been dry-stored in a barn since the late 1980s, and is said to have been “discovered by Bonhams specialists.” The reasons for its three-decade-long storage have not been publicized, with the coupe said to have been first registered in November 1973.

Photos of the interior show certainly show evidence of a 30-year slumber, but the interior appears complete and no major item seems missing, looking used but not especially worn, even if a bit dirty. The driver’s seat appears to be far more used than the other seats, while the rear seats appear merely in need of a good cleaning. The body panels show cracks in the paint and just about all other types of wear, including surface rust. The odometer currently displays 81,822 miles, though the auction house is not making any claims about its veracity. 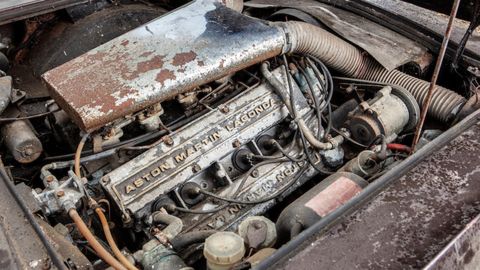 This car will need a complete restoration. The good news is that nothing appears to be missing, and even the three-decade-old tires appear to have been inflated successfully for the car to be rolled out and photographed. The interior, including the seats, appears salvageable and restorable, and there’s even a cassette sticking out of the tape deck, as if left there the last time this car was driven.

It certainly helps that this particular model is seeing growth in demand among collectors, but it’s clear that a concours restoration needed here will run six figures, after the purchase of the project car itself. And then again, it’s possible to get into a good enough example of this model for about double the top estimate, and about triple for a concours-grade one. So this equation may not make sense to all bidders. 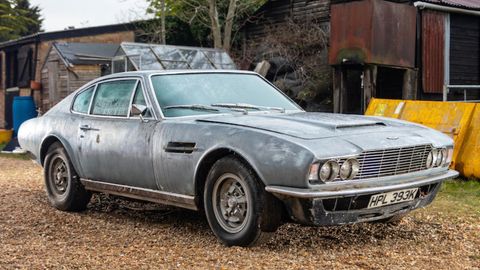 Contestant Number Two in this auction is a 1971 Aston Martin DBS V8, which appears to have emerged from the same barn based on the photos. This car hails from 1971 and is said to have been inherited by the consignor from his father in 2003. However, the car itself is reported to have been in dry storage since 1992, or just a few years after the V8 retired to the barn. Bonhams indicates that the last MOT is from 1992, indicating that the car was still on the road that year.

The DBS, styled by Williams Towns (of Lagonda fame), arrived on the scene around the same time as the V8, offering a grand touring layout and a V8 engine which arrived in this body style in late 1969. A DBS model powered by an inline-six debuted a couple of years prior, as it took Aston Martin a little longer to engineer and begin production of a new powerplant for its new model. The DBS V8 had an unusually short tenure, spanning from 1969 until 1972 until it was dropped in favor of the V8 model, which shared its 5.3-liter V8. The body design of the DBS also served as the prototype for the Lagonda project, with the factory using it as the basis for a seven-car production run in the early 1970s. 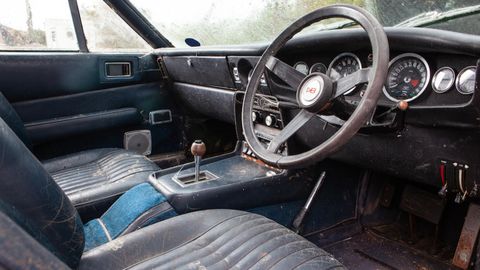 The DBS has long been overlooked by collectors until about five years ago, when values reached a point where concours restorations became a little easier to justify, prompting a wave of neglected examples to emerge from barns. The V8 version of this model is certainly more valuable than the inline-six version, which is still quite affordable when it comes to classic Aston Martins, so this car should spark more interest than a more common six-cylinder.

The condition of this car, observing from the photos, is about on par with the 1973 V8 model above, and is evaluated identically to the V8 by the Seller’s Assessment in the listing, being given 20 out of 100 points. As with the V8 above, no major items appear missing from the interior or the dash, and the visual appearance of the seats and the engine bay is about equal as well. After all, both of these cars spent about equal time in the barn, so no big surprises there, though the DBS V8 might have a slight edge since it was documented to be on the road in 1992. 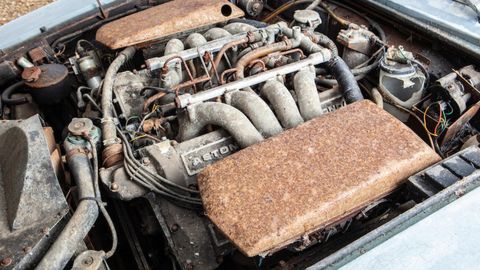 The top estimate here is $14,000 north of the top estimate of the other car, perhaps reflecting the relative rarity of a DBS V8 model compared to the availability of the former V8 coupe, which spent far more time in production as is thus easier to locate in a variety of price ranges. Bonhams notes that just 405 examples of the DBS V8 had been built between 1969 and 1972, so the universe of the DBS V8 is quite finite. Numbers-wise, this is definitely the rarer model if not necessarily the more desirable one, but it may prove to be more interesting as a starting place for a restoration.

We’ll have to wait a couple of weeks to find out which one will bring more at auction.

Visit the auction website to view the full list of lots from the upcoming auction and a detailed auction schedule.