Two decades after Bentley and Rolls-Royce twins were adopted and split up, leaving with their respective stern German parents for new homes, it’s becoming a little difficult to process that not long ago the automakers essentially offered the same cars. But in the 1990s this had been the status quo for decades, and car magazines didn’t even bring it up all that often. It was just accepted as the status quo. The last two sedans launched by the still-joined automaker were the Bentley Arnage and the Rolls-Royce Silver Seraph, which went on to have distinctly different fates. The Arnage stayed in production for quite some time under Volkswagen, but the Silver Seraph was produced in much smaller numbers and was dropped as soon as BMW had readied the imposing Phantom sport utility sedan. As a result, the Seraph isn’t even seen all that often, except perhaps in central London, where remaining examples camouflage easily in traffic in contrast to their Phantom successors.

Nearly 25 years after their debut the Rolls-Royce and Bentley sedan duo seems elegant and understated, even though the Rolls-Royce CEO called this period “a low point” in the company’s history.

But in a few weeks, one of the earliest Silver Seraphs produced will roll across the auction block, when Historics Auctioneers offers a 1997 example with just over 40,000 miles on the clock. 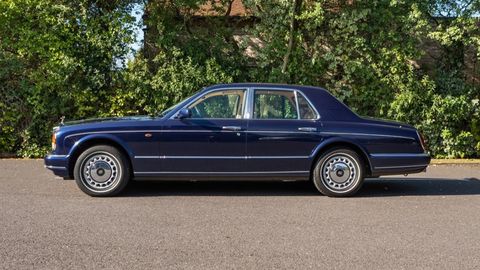 At their debut, the Silver Seraph and Arnage replaced a shared bodyshell that dated back nearly two decades to 1980, and had spawned a large number of variants along the way for the two brands. The Bentley and Rolls-Royce sedans were the first truly new designs in quite some time, the former featuring a BMW V8 engine, the latter a 5.4-liter BMW V12. At first, the two models were offered in just one wheelbase but later received longer wheelbases, with the Park Ward version of the Rolls debuting in 2000. The standard-wheelbase models, despite sharing a bodyshell, behaved a little differently in tests back then, with the Arnage being a little more sporty and tuned as such, while the Seraph erred on the side of comfort and power. The Seraph’s 5.4-liter V12 was borrowed from the E38 BMW 7-Series.

The example that Historics Auctioneers will offer in March was finished in December 1997, before the model’s formal debut at the 1998 Geneva motor show. The car features Peacock Blue paint over magnolia Connolly leather. The auction house says the car has good service records, with the last work carried out in late 2020. 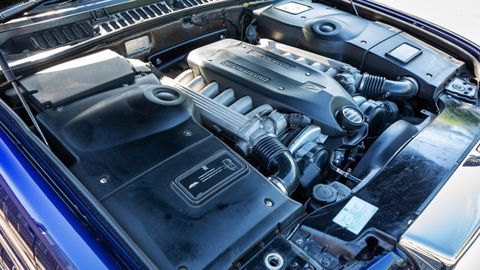 The auction house estimates this Silver Seraph to bring between £28,000 and £33,000 on auction day, or between $38,700 and $45,600. The low miles certainly count in this example’s favor, but the top estimate could still be said to be quite strong money. Originally, these started at about £155,175 new in the U.K., but that was almost 25 years ago. Over time this model (and the Arnage) had not fared especially well on the used market, as there are plenty of Arnages in the U.S. with deferred maintenance, incomplete records and material aging issues. As a result, Arnage values hover a bit more than the $20,000 mark at the low end, and don’t really stretch all that far above $70,000 because this model is now considered to be quite dated in many respects. Amounts less than $70,000, after all, can land one a higher-mileage, early 2000s Flying Spur or Continental GT, and those are almost fresh designs.

The Silver Seraph is a slightly different beast. There weren’t really many of them to begin with and many examples were used as chauffeured private sedans, as opposed to being owner driven. So the two models’ clientele was somewhat different, even though the Silver Seraph vanished from the scene even quicker than the Arnage: The Rolls’ production stopped in 2002, while the Arnage hung on with a couple of facelifts until 2009. And by then the Continental GT had upstaged it. 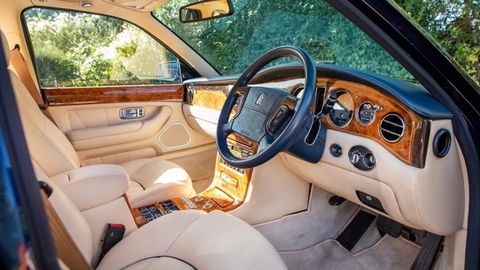 But are either sedans really all that collectable at the moment, or are they now simply used cars, in the same way the Mulsanne or Silver Spirit of the 1980s had been by the early 2000s?

Of course, there are Rolls-Royce collectors who own Seraphs and would snap up a low-mileage example, but as a car to use as a fair weather classic the market for Silver Seraphs is a bit narrow on either side of the Atlantic. Of course, if it lands anywhere the low estimate this would be a spectacular way to look like “old money” for not much coin… at least until the first dealership maintenance appointment.