The Unimog has worked a three-pointed star badge long enough for just about everyone to consider it a Mercedes-Benz design. But that’s not the case. Today is the 70th anniversary of Daimler-Benz’s purchase of Unimog from Boehringer Brothers.

That’s right: the Unimog was initially developed by the small Göppingen-based automaker Boehringer Bros., which first showed the production-ready prototype of the versatile truck at the Deutschen Landwirtschaftsgesellschaft (DLG) show in Frankfurt in 1948.

Of course, the development of Unimog began years before. The roots were planted in the months after the allied victory in Europe, when engineer Albert Friedrich began work on a medium-sized, four-wheeled agricultural tractor that could perform a number of jobs in the field and on the road. The list of goals for this machine, laid out differently from most agricultural tractors of the time, was quite long: it had to be able to carry attached tools on all four sides while also offering four-wheel drive, being able to carry cargo, act as a tractor by pulling a plow and also be able to have a high-enough on-road speed to keep up with city traffic. 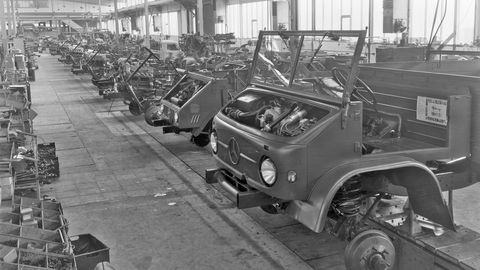 Needless to say, there were small trucks at the time that could carry cargo, but most were not four-wheel drive and they certainly could not carry attachable tools on all four sides. Likewise, there were wheeled agricultural tractors that could do some of these tasks, but they couldn’t carry cargo without a trailer and were not great to drive on road.

The first prototype sought to do it all, all while featuring a complex suspension with portal axels that made it just as usable as an off-road explorer. The truck acquired the name Unimog from Universal-Motor-Gerät, or universal motorized vehicle, in 1946, and the following year the prototype was first shown to the public. Early prototypes, built by Erhard & Söhne, were powered by M 136 engines, while later prototypes were powered by Daimler’s OM 636 diesel engines paired with six-speed gearboxes. Production of the Unimog 70200 by Boehringer Bros. in Göppingen began in 1948 with 600 hundred examples of the 70200 model being produced, with demand quickly outpacing supply. 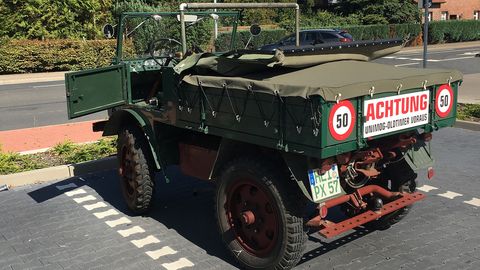 “Following the greatly successful exhibition of the then revolutionary ‘Unimog’ at the Deutschen Landwirtschaftsgesellschaft (DLG) show that was held in Frankfurt in the summer of 1950, it became clear to the managers at Göppingen-based Boehringer Bros. that it would only be possible to meet the extremely high demand for their Unimog with a vast amount of investment,” Daimler says. “Plus, engine deliveries from Daimler-Benz were also not entirely guaranteed in view of the company’s own capacity requirements during the post-war economic boom. If the engines were to be installed in any vehicles, then it was preferable to Daimler that they would land in their own vehicles.”

On October 27, 1950, Daimler-Benz signed the contract to take over Unimog production, lending its manufacturing base and expertise to what was rapidly becoming a sought-after machine both for farmers and for many other uses, including as a fire truck, a forestry vehicle and a military truck. The OM 636 diesel engine, initially developed for the Mercedes-Benz 170 D sedan that was the the first diesel passenger car engine produced in post-war Germany, found a natural home in the Unimog, serving up just 25 hp. This may not sound like much today, but the Unimog had a top speed of just 50 km/h at the time, so it was plenty for work in the field. 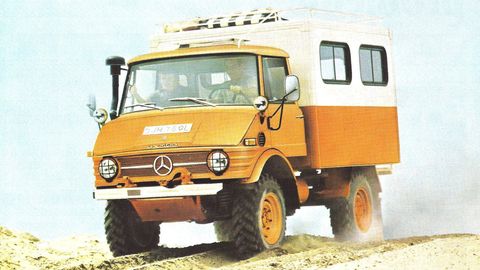 “The negotiations were attended by two representatives of Daimler-Benz AG and the six shareholders of the Boehringer Unimog development company,” Daimler notes. “Among them was the father of the Unimog, Albert Friedrich, as well as Rolf and Werner Boehringer as representatives of the Boehringer Bros. manufacturing company from Göppingen. Talks on the Unimog takeover had already begun on 5 September 1950. During these talks, Daimler-Benz made a written declaration of the intention to take over the Unimog with all rights and obligations. The negotiations were concluded on 27 October 1950.”

The Unimog is still in production today, several generations later, and it’s still as versatile as ever, serving dozens of different roles in countries around the world. But its layout has not changed much from the first production models, featuring a tall cab sitting just behind a truncated hood above and behind the front axle. 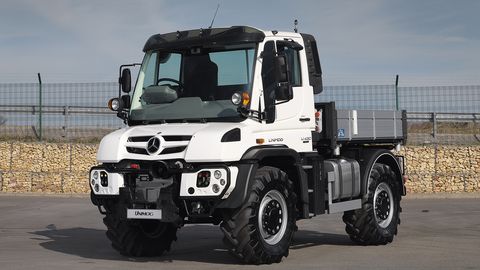 Sign up for comments and let us know your thoughts about the Unimog.