McLaren sports cars are the very definition of exotic, made from carbon fiber, aluminum and leather, with high-revving engines sitting behind the occupants, dihedral doors that open up and out, and rooflines that barely come up above your waist. The latest model is the new 2020 McLaren GT — no numbers with that name, just two letters, G and T. It stands for Grand Touring (not gin and tonic) and implies that this latest McLaren supercar is a slightly different breed, meaning more livable, than what the company has put out before.

Related: Living With a 2020 Chevrolet Corvette Stingray C8: All That and Fuel Efficient Too?

While other exotic carmakers have their SUVs (Aston Martin DBX, Bentley Bentayga, Lamborghini Urus) McLaren has stood firm and refused to follow suit, insisting that two-door sports cars are where they intend to remain. The new 2021 GT is, in effect, McLaren’s SUV; a more comfortable, easier-to-use “daily supercar” that McLaren hopes to use to boost its appeal to a wider array of customers. I got to spend a long weekend with one to see just how livable it really is on a daily basis — and how it is compared to my current favorite everyday usable supercar, the all-new mid-engined 2020 Chevrolet Corvette Stingray.

There’s something about the look of a mid-engined two-door car that just can’t be beat. Regardless of its price — either stratospheric like the McLaren or much more down-to-earth like the Corvette — it’s still going to turn heads on highways, street corners, gas stations and traffic lights. But the McLaren has a more exotic look than the Corvette. The McLaren is less angular and more organic. Both are dynamite in the styling department, but the McLaren has more than a whiff of something special to it, especially when done up in this jaw-dropping Ludus Blue metallic paint. The McLaren’s rarity is reinforced when you pull up to a destination and pop those dihedral doors; they’re much more likely to draw a crowd than the conventionally opening doors on a Corvette.

Park the McLaren GT next to any other supercar of its ilk, however, and you’ll notice something unusual: It rides high, with more ground clearance than you’d expect from something like this. In fact, the GT sits higher than other McLarens. There’s always a fear when driving a McLaren that you’ll scrape the front end on a curb, or a driveway, or even if the road is a little raised when leaving a gas station. McLaren and Chevrolet offer an electronic suspension lift for the front end of both cars to help you get over such obstacles (with the Corvette actually tying its capability into the GPS system so it remembers where to lift the nose), but the GT simply rides higher than other models to begin with, making urban use a lot easier. I never employed its lifter mechanism my entire weekend with it; much to my complete astonishment, it didn’t scrape on anything.

The McLaren GT’s engine has been covered by a quilted leather package shelf that acts as a place to store some soft luggage, so you can’t actually see it. Rest assured, however: The engine is definitely there. You’ll hear the twin-turbocharged 4.0-liter V-8 sitting behind your head when you fire it up, but it’s very well insulated from prying eyes thanks to the quilted leather cover. It makes 612 horsepower and 465 pounds-feet of torque, so there’s no problem at all keeping up with traffic — anywhere. It makes the McLaren blisteringly fast (a claimed 0-60 mph in 3.1 seconds) with eyeball-flattening acceleration on tap and just a stab of the accelerator away. It’s mated to a dual-clutch seven-speed automatic transmission driving the rear wheels that bangs off shifts with lightning quickness. The powertrain is fantastic, only adding to the more exotic feel of the new McLaren GT, but it’s still a rough-and-tumble powerplant, not some isolated, coddled, over-refined unit that tries not to be noticed. It doesn’t idle smoothly, it vibrates and spits and shakes, making its presence known in dramatic fashion. It’s fun to drive for sure, but it comes across as a barely tamed beast of a mill. 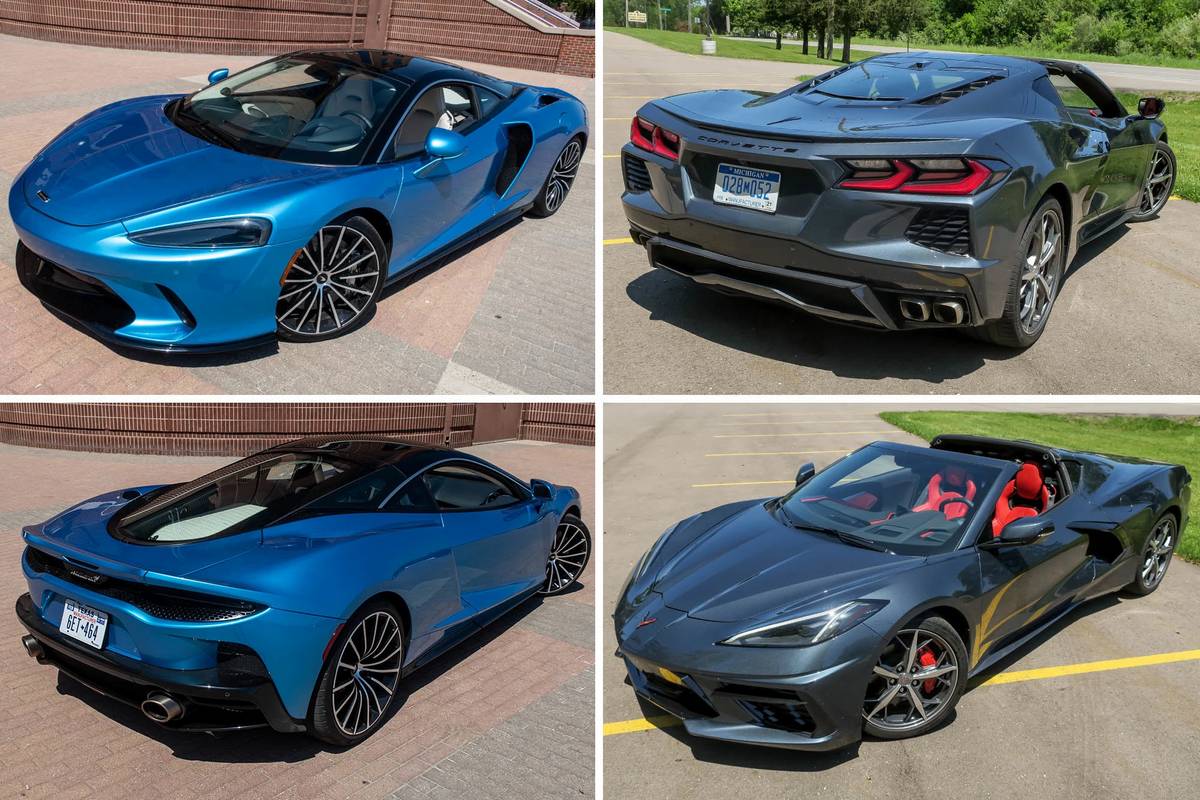 The nonturbo 6.2-liter LT2 V-8 engine in the new 2020 Corvette doesn’t quite match the output of the McLaren: 490 horsepower (495 if you get the optional performance exhaust) and 470 pounds-feet of torque. It’s good to get you from 0-60 in very close to 3.0 seconds however, according to Chevrolet, sending power to the rear wheels via a dual-clutch eight-speed automatic transmission. The Corvette V-8 doesn’t have the punch or fury of the smaller McLaren engine, but it’s actually far, far more quiet and civilized. While this may not be ideal in a rough-edged supercar, it’s perfect for a daily-driver grand touring car that both the GT and Corvette purport to be. You can make the engine sound more formidable if you opt for the electronic sport exhaust, but even under full thunder in its most aggressive mode, you’re barely perturbed by the sound in the Corvette’s cabin. That almost feels rather un-Corvette-like given the alarming aural fury of past cars, but if you’re looking for a daily driver supercar, calmness might be more of a priority than a visceral audio soundtrack. It’s here where the Corvette prevails.

Running errands, picking up groceries, collecting takeout from the local sushi place — these are all things one does with a daily driver supercar, and ones I did with both the McLaren and the Corvette. The new McLaren GT is indeed more comfortable than other McLaren models I’ve tested. It has plenty of headroom (with a trick electrochromic glass roof), and it has slightly better visibility than other models. Doors that lift instead of swing out are ostensibly also better for urban use because there’s no risk of smacking a pole or the neighboring car with the door while opening it in a tight parking garage, for instance.

Luggage space is acceptable, with a sizable frunk (front trunk) and a thin but usable-in-a-pinch upholstered space above the engine meant to hold some soft-sided bags (and possibly some golf clubs, but I wouldn’t count on it). So the GT is more comfortable and user-friendly than other McLarens, but it still has a few significant comfort shortcomings: Its doors make it trickier to get in and out of, as you still have to do the “supercar sit and spin,” planting your butt in the seat first and rotating your legs into the footwell, reversing the process for egress.

There are no such issues with the Corvette, which is night-and-day different from its predecessor. The interior is even more spacious, comfortable and adjustable than the McLaren. It doesn’t have the McLaren’s super-premium materials, but it’s certainly no slouch in that department, and some may argue that the Vette is even more uniquely stylish. There are more interior cubby storage places, as well. Visibility is just as good as the GT, plus there’s the added feature of the Corvette’s digital rear camera mirror that opens up the view aft to one much more expansive thanks to not needing to peer through the Vette’s small rear window.

The Corvette’s construction differs from the McLaren GT’s in that there is no carbon-fiber tub with huge side sills that you maneuver your body over to get in or out of the car, so ingress and egress is much easier in the Corvette. The Corvette’s frunk is as big as the McLaren’s, and the trunk is considerably more usable with a full-width area allowing for that proverbial golf bag, or two rollaboard suitcases. You can even put things in the trunk and still see the beautiful engine through the back glass. Add in the Corvette’s easily removable lightweight roof panel that stores in the trunk when you’re not carrying suitcases, and the Vette has a decided edge in usability.

There really is no contest here. The Corvette’s onboard multimedia system, and really all of its electronics and controls, are far more user-friendly and well developed than the McLaren’s; such is the benefit of the Corvette coming from a huge automaker with deep pockets to pay for development of systems that are shared among various cars. The McLaren GT uses a unique operating system that controls everything from climate control to radio selection with very few dedicated buttons. There is no Apple CarPlay or Android Auto connectivity. The problem with the McLaren system is that the display itself is only a 7-inch, portrait-oriented touchscreen that’s no bigger than a large mobile phone. The system itself is a little finicky to use due to the small size of everything that has to be packed into that narrow real estate, and the display is difficult to see in direct sunlight.

The Corvette’s controls are admittedly also unconventional, but they do feature dedicated climate control buttons. They’re arranged in an unusual strip down the center console, but everything that the driver needs to use is within easy reach of the driver’s hands while still on the steering wheel. There’s no need to hunt for anything, especially if it appears on the 8-inch touchscreen display that’s just a finger-swipe-width away from the steering wheel, oriented as it is towards the driver. It uses a variation of Chevrolet’s MyLink, one of the more complete and user-friendly systems on the market. Apple CarPlay and Android Auto are present and standard, but Chevy’s native system is also easy to use and very clear.

Which One Would I Pick?

Despite the idea that these are both “everyday supercars,” comparing them apples-to-apples isn’t really accurate. You’re looking at two different buyers here due to the vast cost disparity between the two cars. The new McLaren GT starts at $213,195, including a hefty $3,195 destination fee; the price of the one seen here is $263,125 as tested. At the same time, the last 2020 Chevrolet Corvette Stingray I drove (a 2LT without the Z51 sport package that includes Magnetic Ride Control) rang in at just $72,025, which is roughly a third of the McLaren’s window sticker and less expensive even than a lot of the big SUVs Americans buy as family cars. That attainability, combined with the fantastic entertainment value of the Corvette, really makes it a successful everyday supercar.

But that doesn’t make the McLaren a bad alternative in the slightest if you have the means to acquire one. It’s on another plane of existence than the Corvette, delivers a far different message to everyone who sees it, and is much more about exclusivity, cachet and performance than comfort or value. All I know is that if I was driving from Paris to my villa in Monaco, the McLaren would be my choice. If I was driving from my house to the Whole Foods, I think I’d take the Vette.