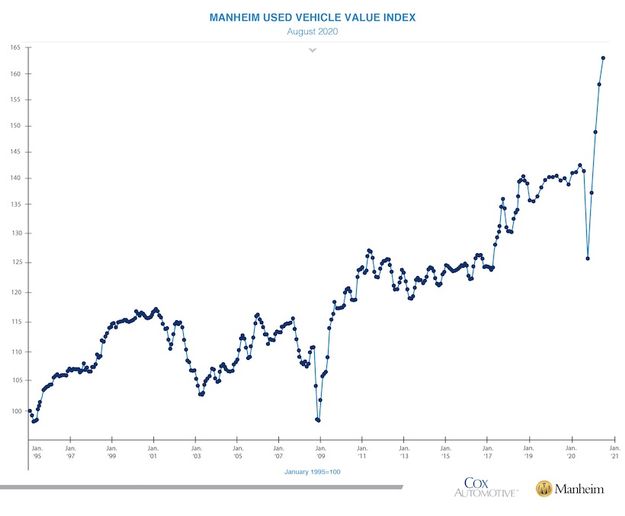 Wholesale used vehicle prices increased 3.64% month over month in August, bringing the Manheim Used Vehicle Value Index to 163.7 a 15.8% increase from a year ago and another record-high for the Index, which also occurred in June and July of 2020, according to Cox Automotive.

Improvements in the Manheim Market Report (MMR) were seen over the four full weeks of August, resulting in a 1.6% cumulative increase on the three-year-old Index, according to Cox. On a year-over-year basis, most major market segments saw seasonally adjusted price increases in August, with luxury cars and pickup trucks outperforming the overall market.

MMR Retention, which is the average difference in price relative to current MMR, averaged 100.5% for the month, Cox announced.

Total used-vehicle sales volume was down 4% year-over-year in August, according to the report. The August used seasonally adjusted annual rate (SAAR) is estimated at 38 million, down from 39.7 million last August and flat with July

Consumer Confidence in August declined 7.5% and left confidence down 37% year-over-year. Plans to purchase a vehicle in the next six months declined in August to a 10-year low.