Just past the halfway point of HOT ROD’s second year of publication, “The World’s Fastest Hot Rod” was featured. The car was built by steel worker Bill Burke and Alhambra, California, firefighter Don Francisco, who could be considered early originators of belly tankers in 1946. Unlike their first tankers with engines mounted in the front, they stuffed the engine in this racer behind the driver, mounting it to a combination of Model A and T frame pieces. Model A axles were used with only a front transverse spring damping the front. The body began life as a 300-gallon drop tank from an airplane that was worked into the form needed for racing. All together, the car weighted 1,289 pounds. 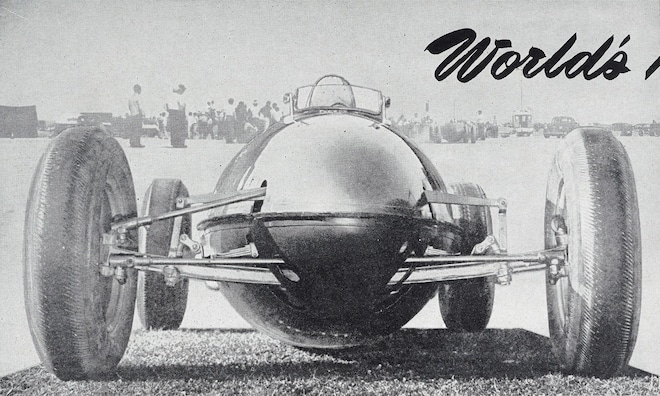 The engine was a 272ci unit from a Mercury hard-mounted to the frame. It sported Edelbrock heads and intake, Harman and Collins Super H camshaft, and a Povtin ignition system. This was all kept cool via a 26-gallon water tank from which water was pumped and circulated through the engine without the use of a radiator. The engine was connected directly to the 2.76:1 diff with only a clutch and driveshaft. With direct-drive the car was capable of breaking its own SCTA C Class two-way record of 164.83 mph in 1947. That little flathead was spinning like a top!