This matchup pits several fast but compact EVs against each other in an epic drag race.

In this drag race, we put 8 different challengers, 8 small challengers to be more precise, against each other. It’s not the usual drag race though. We have eight of the best small electric cars at the moment. Which is the fastest? Let’s find out

Here are the contenders

It’s the last to debut internationally. The car’s design is the iconic one we all know, but it got a little more modern style. The battery is the largest available, 48 kWh, and the engine has a power of 87 kW, 118 HP.

Fun and super-tech, it combines its 80s lines with the most modern technologies. The “wow” effect is also ensured thanks to the interior of the car: it’s a tiny spaceship with numerous screens. The car battery is average, from 35.5 kWh, and is rear-wheel drive.

It needs no introduction, It is, in all respects, a Mini, both in terms of aesthetics and driving feelings. With its 184 hp it is, on paper, the most powerful and the fastest. She is the one to beat.

It is one of the most interesting cars. It’s compact – it’s around 4 meters long and 40 meters long, like a Nissan Qashqai – but the battery is small, 36 kWh. It is the third of the group in terms of power but it is the heaviest of all.

It certainly doesn’t lack style and excellent driveability. The battery is 50 kWh, one of the most capacious, and has 136 hp. She has sharpened her claws.

Yes, it’s there too, because about a year ago it updated with a much larger battery. Now it has 32.3 kWh of battery and autonomy is 260 km, calculated based on the WLTP homologation cycle. Not bad, but, maybe, a few more horsepower might be useful.

This car is the most experienced in the group. In an autonomy race it would be the most formidable rival but for a drag race it lacks a bit of power, but it can compete with other cars at the start because it has a good shot.

The city electric by definition, even with four seats. Its strengths are practicality and habitability. Too bad that its only 18 kWh of battery capacity limits the range and performance. But it’s still the lightest: where will it rank?

And here are the final results: 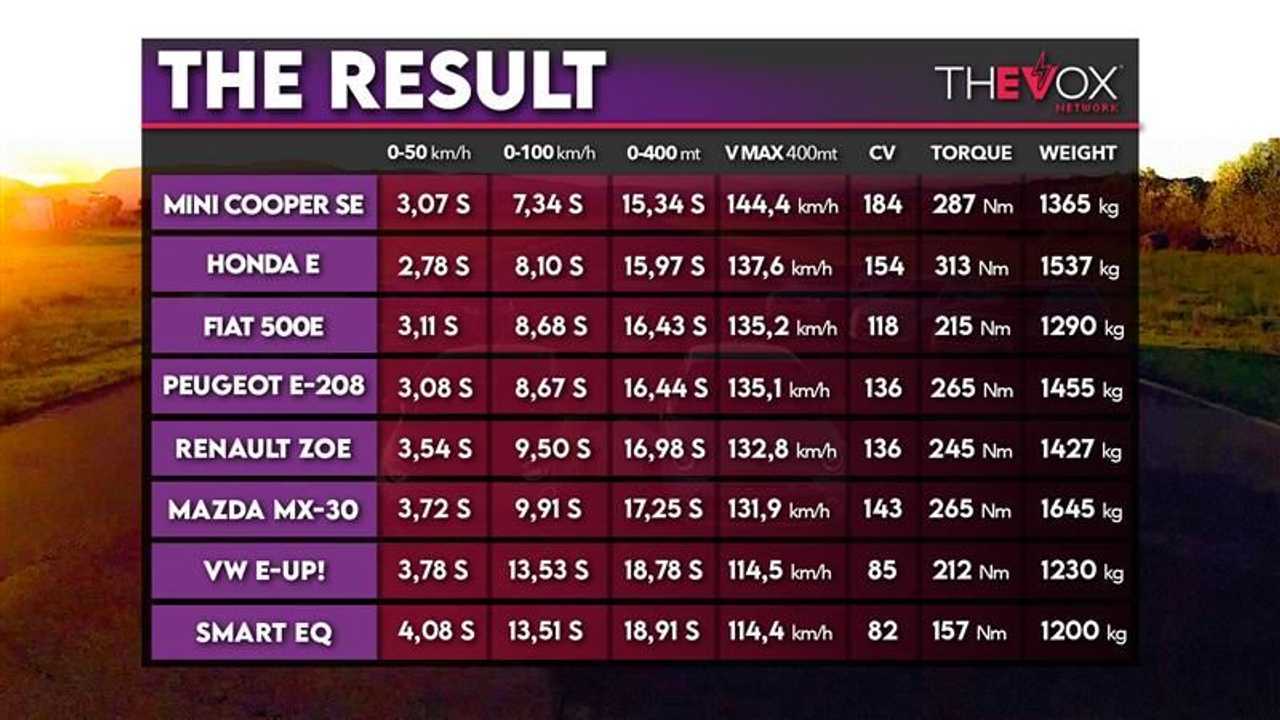 ThEVox Network’s mission is to explain the electric world and to debunk the myths and false information that still circulates around the electric environment, only slowing the transition away from conventional cars.