This is the first non-mule ID Buzz prototype and it looks like it’s the ID Cargo with no rear windows.

After countless batches of spy photos showing only test mules for the upcoming ID Buzz electric commercial vehicle from Volkswagen, we finally got a look at the actual production body. Volkswagen opted to camouflage this particular example to look more like a Renault Traffic van, but the camo isn’t fooling anyone and we’re sure this is the real deal.

It’s not the passenger carrying ID Buzz, but the windowless ID Cargo. In the photos, the prototype is conveniently parked next to a VW Multivan T6.1 and we can immediately spot that it is lower (and possibly a bit wider too). It doesn’t really bare any resemblance to the current transporter – the body’s proportions and details are completely different, making it clear they share nothing.

The front end design of the prototype could best be described as a tall ID.3, with very similar headlights connected to a big badge in the center via a chrome strip (which may or may not be an LED light bar in the final production model). The bumper again looks a lot like the ID.3’s, but in its attempt to fool onlookers, Volkswagen gave it some fake round fog lights that are well integrated, but very clearly just stuck on. 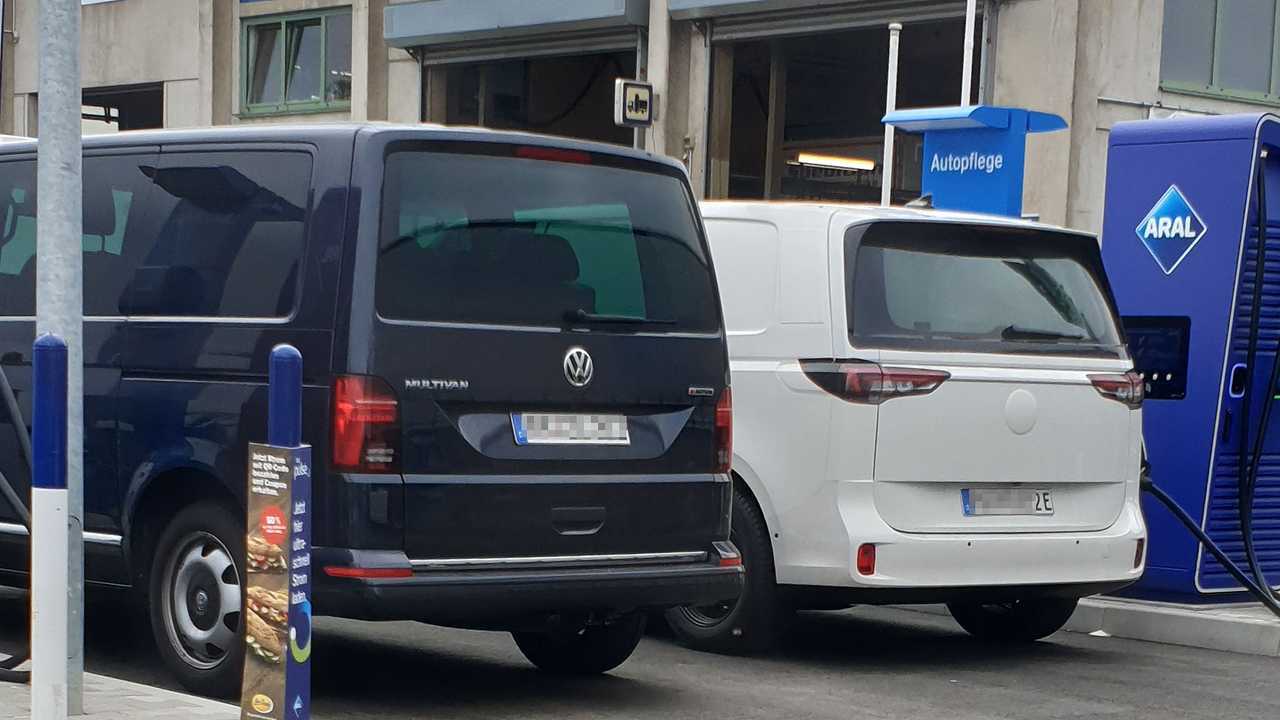 From the rear, you really see just how much lower it is compared to the Multivan. It also has horizontal rear lights, instead of vertical ones like the T6.1 and the number plate is placed much lower. It looks like a more hunkered down, even sportier vehicle and it comes with a small integrated spoiler on top of the door/hatch in the rear.

It is worth noting, though, that unlike other ID-badged models from Volkswagen, the ID Buzz will be a bit more retro-inspired. Volkswagen wants the new vehicle’s design to be an homage to the original T1 and T2 models and you can see this in the shape of the panel below the headlights and badge – its shape owes everything to the T1 and T2, yet on this prototype it’s not so evident because of the faux Renault grille; it will surely be painted a different color to accentuate its shape.

Volkswagen will undeniably pitch this as both an utilitarian proposition, for people who just need a compact electric delivery vehicle, as well as a more style-minded buyers who will use it as a posh neo-retro EV family hauler. Battery sizes will range from 48 kWh to 111 kWh, and the biggest pack should offer a WLTP range of up to around 550 km on one charge.

As with other ID models, the base versions will come with rear-wheel drive only, but dual-motor all-wheel drive will be available too and the top speed will the be same 160 km/h (99 mph). It is also believed that it will have an available solar roof array that is said to add up to 15 km (9 miles) of extra range per day. The ID Buzz and ID Cargo are expected to be revealed next year when they will probably also go on sale.