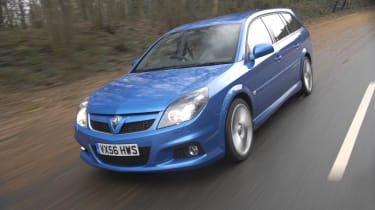 The latest VXR is not the most sophisticated performance car on the market, but it delivers a lot of pace for the money – and the practicality to match. Its engine gives awesome thrust and also sounds good, while the chassis copes well with all that power. But it isn’t rewarding enough for drivers. Once you look at Audi and BMW’s price lists, some enticing, if more compact, go-fast estates are within reach.

You could never accuse any of Vauxhall’s VXR models of being shy and retiring. Everything about the performance range-toppers is aimed at grabbing your attention with all the delicacy of a slap in the face. From the headline power figures to the confrontational advertising, VXR-badged Vauxhalls are designed to stand out.

The all-new 2007 model-year Vectra VXR Estate is no different. Not content with having come up with one of the most powerful front-wheel-drive machines money can buy, the engineering team behind the model has upped the ante with even more performance.

As a result, the turbocharged V6 now delivers a belting 276bhp – up from 252bhp. The extra urge comes courtesy of a redesigned induction system and a fresh engine control unit, although you don’t need to be going at high speed to appreciate the big Vauxhall’s grunt.

The ability to pick up its heels and dispatch the sprint from 0-60mph in only 6.3 seconds allows the latest hot Vectra to hold its own alongside fully fledged sports cars. With so much straight-line speed, Vauxhall has ensured that the VXR’s stability control system can’t be turned off. The move keeps wheelspin to a minimum, and stops the Vectra blanketing the road in tyre smoke…

So for a front-wheel-drive machine that puts out 276bhp, it’s remarkably well behaved, even when driven hard across poorly surfaced roads. Torque steer is limited and the Vauxhall is very swift to respond to the throttle’s commands.

Effortless performance from the V6 powerplant ensures the driver will be the king of the motorway, too. The engine sounds fantastic, but the bottom line is that this Vectra is a go-fast executive express. The steering is accurate but rather lifeless and devoid of feedback, while the chassis is competent and sure-footed although, again, it’s a little inert. Even with the Sport setting turned on, the newcomer doesn’t manage to engage the driver, as the tyres’ huge grip over-compensates for any natural handling balance.

Nevertheless, you can cruise from one end of the country to the other swiftly and comfortably in the Vectra VXR, marvelling at the electric Recaro leather sports seats (an optional extra at £800) or gadgets such as the adaptive xenon headlamps (£850).

And all the while, you can make calls using your Bluetooth-compatible hands-free phone system (£300) and sample your favourite music via MP3 (£800, together with CD and satellite navigation). As far as executive toys go, this latest flagship Vectra is every company car driver’s dream.

Of course, such luxuries don’t come cheap. Add this little lot to the standard £25,515 VXR estate – as well as other essential extras such as climate control (£275) and metallic paint (£350) – and the price tag will soon soar.

What’s more, if you take advantage of the tow pack (£700), Flex Organiser (£50), power tailgate (£500) and alloy-effect roof rails, you will be writing a cheque for a grand total of £30,140. That pitches the car against some highly desirable premium machinery – although nothing which will turn as many heads as the outlandish Vectra.