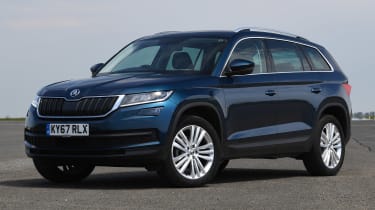 Skoda has a habit of producing great cars that put an emphasis on usability and affordability, and while its products used to be bought with the head rather than the heart, that’s not necessarily the case any longer. The Kodiaq is proof of this; when it arrived we were so impressed that it scooped Best Large SUV in our 2017 New Car Awards. At the time we proclaimed: “The new Kodiaq offers family-friendly practicality in a more stylish body than a conventional MPV, while features such as the slick infotainment system and all of the brand’s usual ‘Simply Clever’ touches combine with Skoda’s affordable pricing to make the Kodiaq the best large SUV on sale”. A year later the Kodiaq scooped the same award, and today this multi-talented family car is still desirable.

A long time ago in the UK, Skoda’s products weren’t seen in the best light. But when the company was absorbed into the Volkswagen Group, it moved on to a completely different trajectory.

Skoda had resources at its disposal that previously were just a pipe dream, and as a result its cars went from also-rans to desirable machines. The launch of the Kodiaq in 2017 was the ultimate expression of that move upmarket, because this was not only Skoda’s first SUV, but also its first seven-seater.

With its smart, chiselled looks, impressive dynamics and tempting value, the Kodiaq summed up everything that Skoda has come to stand for. The Czech company’s transformation was now complete.

In July 2018 a 1.5 TSI engine replaced the 1.4 TSI unit, and the range-topping Laurin & Klement arrived with a heated windscreen, upgraded hi-fi and extra driver aids. The sporty Kodiaq vRS appeared in March 2019, with a 237bhp 2.0-litre twin-turbo diesel.

The TSI engines work well (even the 1.4), but the motor that makes the most sense is the 2.0 TDI because it’s muscular and economical – and it’s the most common unit, too. 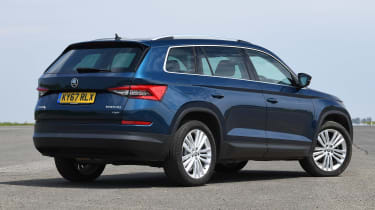 The manual and auto transmissions are decent and, if you’re buying for towing, we’d recommend four-wheel drive. The entry-level Kodiaq S (available only with the 124bhp 1.4 TSI) comes with 17-inch alloys, air-con, a multifunction steering wheel, DAB radio, keyless go and touchscreen infotainment.

Alternatives to the Skoda Kodiaq

If you want to stick with the VW Group, the closest match is the SEAT Tarraco, which is almost interchangeable with the Kodiaq. Alternatively a VW Tiguan or Tiguan Allspace (with five or seven seats respectively) might suit. The second-generation Peugeot 5008 (from 2016) looks great and is comfortable, as well as decent value, while the Nissan X-Trail has an uninspiring interior but is spacious and comes with efficient engines.

The X-Trail can be had with seven seats, just like the Kia Sorento and its cousin, the Hyundai Santa Fe, which are great value and come with excellent warranties. The Land Rover Discovery Sport looks smart and has a strong image but it’s costly; so are the Audi Q5, Volvo XC60, BMW X3 and Mercedes GLC, all of which come with only five seats.

To improve economy the 148bhp 1.4 and 1.5 TSI engines have cylinder shut-off tech; this is barely noticeable in operation.

SE L trim and above come with seven seats as standard; a third row is optional on cheaper editions, but can’t be had at all with the entry-level S.

Some owners have found that the seven-speed twin-clutch DSG isn’t quite as slick as the six-speed equivalent, so look out for jerky changes.

If you’re planning to pull, then check the maximum weights, which vary between 1,775kg and 2,300kg depending on which drivetrain is specified.

The Kodiaq is pure VW Group inside the cabin. That means a well designed dashboard with clear instrumentation, impressive build quality, plenty of soft-touch materials and a solid weighting to all of the controls. The Kodiaq’s cabin is very roomy, too – and although the third row (where fitted) isn’t suitable for large adults, small grown-ups or teenagers can easily get comfortable.

Equally impressive is the boot space, which is pegged at 270 litres with seven seats in place, or 2,005 litres with all rear seats folded. Another plus point of the Kodiaq’s interior is the technology fitted; SE models get an eight-inch touchscreen system with Apple CarPlay and Android Auto as standard, and this is upgraded to a 9.2-inch unit with sat-nav on SE L models. 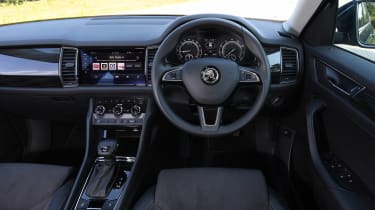 You can check prices of a used Skoda Kodiaq on our sister site, Buyacar.

Owners can choose fixed or variable servicing. The former is set at 12 months or 10,000 miles; the latter allows up to two years and 20,000 miles between visits to the garage, depending on how the car is driven.

Services alternate between minor and major at £184 and £243; the former is merely an oil change and an inspection. The major service is a more extensive check, but no extra parts are replaced; a full schedule of what needs to be replaced, and when, is online at skoda.co.uk/ owners. Every four years a new pollen filter and spark plugs (petrol engines) are required at £35 and £99; fresh brake fluid every two years costs £60. Cambelt replacement intervals vary depending on engine, but TDIs need one every 130k/five years for (vRS: 74k miles).

The Skoda Kodiaq has been recalled four times so far in its lifetime, the first occasion being in May 2019 because 236 cars built in December 2018 weren’t fitted with enough nuts to secure the back seat properly.

Two weeks later (also in May), 393 Kodiaqs were recalled because of faulty airbags fitted to cars built in January and February 2018. The third recall in July 2019 affected 238 Kodiaqs built in February 2019. This time the problem centred on the front seats, some of which had been manufactured with cracks in the frame.

The most recent recall was issued in September 2019, for 1,231 cars made between October 2018 and June 2019. A software fault meant the engine produced insufficient torque at low revs, so an update was required to mend the problem.

The Kodiaq came a very impressive sixth out of 75 entries in the 2019 Driver Power new car survey, and to show that this wasn’t a fluke it achieved exactly the same result in this year’s poll. Top-three scores for visibility, rear-seat legroom and internal storage highlight the Skoda’s practicality. Some lower scores were given for economy and acceleration, but overall the Kodiaq put in a very impressive performance.