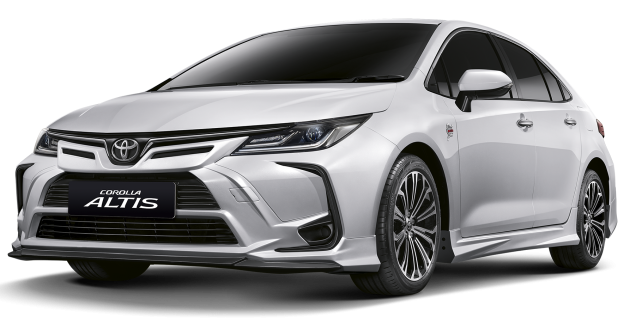 Toyota is sporting up its Corolla Altis in Thailand with a new Nürburgring set of accessories for the C-segment sedan. The package, which consists of a bodykit and some “performance” upgrades, has been offered on most variants for free since October 1.

The addition of the Nürburgring tag seems contrived until you realise that the local Toyota Gazoo Racing Team Thailand actually took class victory at the 24 Hours of Nürburgring with a souped-up Corolla Altis. Not only that, but it won twice in a row between 2020 and 2021.

With the bodykit fitted, the Altis does bear a passing resemblance to the race car, in particular the twin “nostrils” beneath the upper grille, the split lower grille, fake air vents on the rear bumper (the race car had real holes of course) and a large rear diffuser. You also get deep front, side and rear skirting, a bootlid spoiler and Nürburgring front fender badges, but sadly not the racer’s meaty widebody kit and massive wing.

Also included in the pack are lowering springs and an “accelerator control box” said to improve throttle response. The whole shebang is apparently worth 42,000 baht but is being offered for free together with “first-class” motor insurance worth 31,000 baht.

Buyers not keen on the bodykit can instead choose to get a loan with interest rates as low as 0.29% per annum, or 0.79% with the insurance package included. All customers also get a warranty extension from three years to five years or 150,000 km.