Steve spends more time looking at numbers on spreadsheets than on instrument clusters these days, but his love of cars has been honed over 18 years driving and writing about them. It stems from the racy repmobiles his dad drove in the eighties and nineties, but Steve’s horizons have expanded since then.

Cards on the table, I could have chosen the Ferrari 458 as my number one drive, but someone else got there first. What’s nailed-on is that my top pick was always going to be a Ferrari. Whether it has a screaming V8 or a soaring V12, a Ferrari never feels less than special to me.

Before you get into the technicalities of the F12 Berlinetta, the heritage, passion and hype around the Ferrari brand give it an edge, even over other £240,000 supercars. Then you’re faced by the badge, with those athletic proportions clothed in that red paint, and reminded that the options take this car’s price towards £300,000. You’re not even behind the wheel and the F12 has got you. This was me.

Ferrari launched the car at the 2012 Geneva Motor Show and wheeled out the 812 Superfast to replace it in 2017. The F12 was ostensibly to replace the acclaimed 599 GTB, but with the FF having recently gone into service as a Ferrari grand tourer, the F12’s mission was to bring more of that mid-engined V8 Ferrari agility to the brand’s V12 bloodline. To that end, it’s smaller than a 599, and 70kg lighter, too. 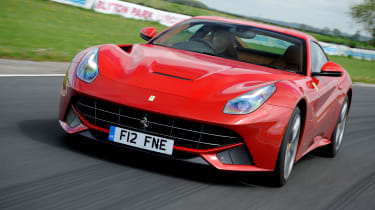 It feels anything but small once you climb into the car, though. The F12 might be beautifully styled, but with those high arches and powerful flanks sculpted around concealed aerodynamic ducts, it looks big. From behind the wheel, that expansive bonnet grows seemingly larger still, and the bark from the engine when you press the F1-lite steering wheel’s red button only confirms that this is a serious, serious car.

Then the sense of intimidation evaporates. The genius of the F12 is how Ferrari engineered a car of this size, complexity and power to feel so alive, natural and enjoyable on normal roads. The steering is stunningly fast, so the instant turn-in means the F12 carves through bends deliciously, almost telepathically, with only with only the tiniest movements of your hands. The magnetically adjustable dampers adapt on the move, giving a ride that’s spookily smooth in the softest setting, holding the car to its line even on the worst B-roads.

The F12 seems bonded to the road, the stunning traction inviting you to feed the power in. Then it gets even better. The seven-speed dual-clutch gearbox is spellbinding, and the V12 is absolute magic: 730bhp at 8,250rpm, 0-62mph in 3.1 seconds, 0-124mph in 8.5 seconds, a 211mph top speed, and a noise that makes your organs wobble in a way that leaves you desperate for more.

With no turbo, the revs build so freely it’s as if the engine naturally wants to be up around 8,000rpm. Your right foot just sets it free to head back there as fast as it can. The gearshifts are so brutal you’ll swear something has broken, but when the red lights on the steering wheel go out, you grab the next ratio and the F12 keeps on going. What a car.

Over the years Porsche has trotted out a long line of cars that are nothing short of fabulous to drive. The company has also shown an unerring knack for building upon the quality in its base models with ever more focused, and expensive, editions.

The Cayman R represented my first drive in one of these ‘hardcore’ Porsche derivatives and, while it might lack the exalted status of Porsche models that have carried the GT4, GT3, GT2, RS and Spyder badges in recent years, it’s an experience that’s stuck with me. 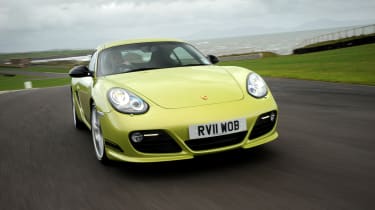 The R arrived in 2011, during the latter stages of the 987 Cayman’s lifecycle, offering an extra 10bhp from the mid-mounted 3.4-litre flat six and a 55kg weight reduction over the standard Cayman S. That weight was culled in fairly unceremonious fashion because, as well as adding lightweight bucket seats and wheels, Porsche got rid of the radio, the air-conditioning, 10 litres of fuel-tank capacity and the internal door release levers. Don’t worry, you could still get out; you just had to yank on a fabric strap that represented the R’s lightweight message being rammed down your throat.

Shorn of creature comforts in this way and still priced at over £4,000 more than a Cayman S, the £52,000 Cayman R might not be the model you’d choose as your daily driver, but it still is the 987 Cayman you’d pick for a one-off drive.

The S was a fantastic car, yet the R is just that little bit better; the weight saving, power boost, stiffer anti-roll bars, and suspension lowered by 22mm all combine to give it an edge.

The joy of the Cayman is its balance and the lovely tactility of the controls. The R accentuates it all, but doesn’t ruin the experience with the harsh ride of a lightweight track car. It’s like silk flowing along your favourite B-road and so rewarding for so much of your time at the wheel – definitely a drive not to be forgotten.

Creating an unforgettable supercar is one thing, but building a model that can tattoo itself on an unsuspecting driver’s memory while you’re far more constrained by size, price, a varied remit, and the fierce competition of the mass market is a feat on another level. That’s why my first drive in the sixth-generation Fiesta stands out. Ford had built a car that redefined what a supermini could be.

The Mk5 Fiesta had slipped well off the pace by the time the Mk6 car was previewed by the Verve Concept at the 2007 Frankfurt Motor Show. As the concept car hinted, the new Fiesta would adopt Ford’s latest Kinetic Design themes, presented in a new pallet of vibrant colours. Glinting in the sunshine on the international launch in 2008, the cars looked almost painfully modern. 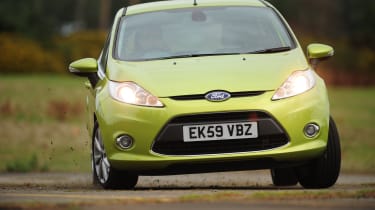 Riding on an all-new platform, the Fiesta defied its own sharp exterior lines and wedgy profile by offering loads of interior space; you could see the five-door model stealing sales from the larger Ford Focus. The futuristic feel was carried over to the angular dash where Ford had moved to a then-novel starter button and modelled the minor controls on the button-heavy mobile phones of the day.

The Fiesta’s greatest asset, of course, was how it drove. Even at launch there was the suspicion that the car was being hobbled slightly by a range of unremarkable engines, yet it was still a hoot to drive. The variable power steering made it light and agile at low speeds, but pressing on a bit brought the chassis to life.

Ford’s trademark supple ride with strong front-end grip made its new Fiesta a blast. The liveliest 1.6-litre petrol engine had 119bhp and took 9.9 seconds to reach 60mph, but you’d recommend it over many of the day’s small hot hatches.

The Fiesta Mk6 would evolve further over more than a decade on sale, remaining at the head of the supermini market throughout. It was all down to Ford getting the basics so right to start with.

People often ask what car I’d buy if the fickle finger of fortune suddenly flicked a shed-load of cash into my lap, and the BMW 535d Touring is my long-serving stock answer.

I do recognise that offering up a big diesel estate car may not show me in the best light. I could certainly go for something fast and exotic to look more daring, or come up with
an environmentally friendly pick to seem more progressive, but then I would be lying. The 535d Touring is where it’s at for me. 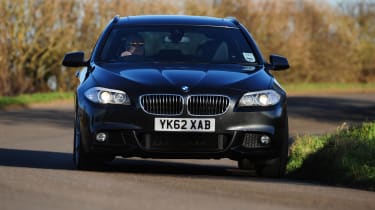 I’m not even talking about the latest version; it’s the F11 BMW 5 Series Touring, launched in 2010. I drove it shortly after it went on sale in the UK in M Sport specification and I loved it. As a mix of space, pace, design, driving fun and fuel economy, it was a pretty much perfect ownership proposition in my eyes – classy-looking, with the iDrive control system greatly improved over the previous-generation cars’.

Here, BMW’s twin-turbo diesel kicked out 295bhp and 600Nm of torque. With that lot channelled through the eight-speed automatic gearbox, you could see 62mph from a standstill in 5.7 seconds, and the mid-range thrust made it feel even quicker. It also did 46mpg in the old NEDC tests, which looked like sorcery back then.

Even with the firmer suspension of the M Sport package, the ride was smooth, and refinement good enough to make you forget it was a diesel. This was a sparkling long-distance car, but also one that had BMW’s uncanny trait of seeming to shrink-wrap itself around you along twistier roads. The car felt far more responsive and communicative than a car this large and spacious had any right to. The 535d is a great car to drive that, I’m almost certain, would be a better one to own.

If longevity is any sign of quality then the Caterham 7 has clearly got something about it. Conceived as the Lotus Seven by Colin Chapman in 1957, it’s still going strong with the same basic formula.

I’ve had quite a few stints folded-in behind the wheel of variations of the Caterham over the years, partly as a result of living a few miles from the eponymous Surrey town that was the firm’s base, and often being sent to pick up demonstrators from the little showroom. Those drives were never less than memorable, sometimes for the wrong reasons, but the car I recall most vividly was the Superlight R300 that I used daily for a three-month test, in winter. 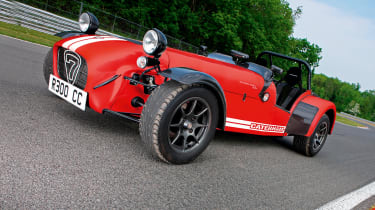 The Caterham 7 is a spectacularly impractical car. If you’re lucky enough to have a roof, erecting the popper-lined leather contraption in the wind and rain is like being mugged by a giant bat. If it’s cold, be prepared to de-ice the outside of the car, then the inside, but once you’ve managed to get in and under way, the heat from the engine will soon melt your shoes.

Yet, that long, long list of idiosyncrasies is wiped clean when you are on the move, preferably with the roof stowed and the sun shining. With 175bhp from its Ford engine, this R300 had a supercar-shaming 339bhp per tonne. The tiny wheel and cut-down gearshifter invite an economy of movement – the confined driver’s seat is hardly the place for grand gestures – but it’s all that’s needed to dart the car from corner to corner.

The performance is breathtaking but even 30mph feels exciting; the experience is so raw, the driver so connected to what’s going on around them. In the age of radar cruise control and touchscreens, driving one is just a completely different kind of exercise: a far more charming one.

Which of Steve's choices is your favourite? Let us know in the comments below…