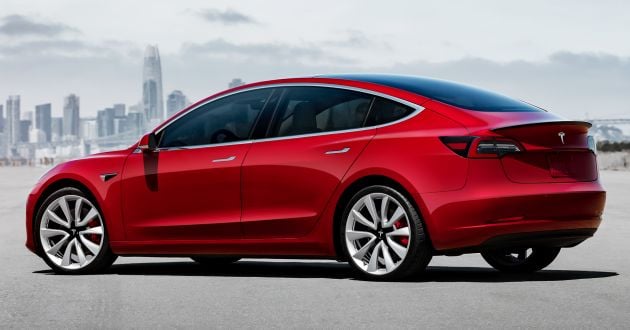 The Tesla Model 3 is setting sales record wherever it goes. In Australia, it was the bestselling passenger car for the month of March with 3,097 deliveries, followed by the Hyundai i30 and Toyota Corolla with 2,455 and 1,924 deliveries respectively, CarExpert reports.

The year-to-date figure for the Model 3 is 4,417 units, or two-thirds of all the fully electric cars sold Down Under. That is one mean feat. However, the report notes that Tesla does not have consistent monthly tallies because customer orders tend to be delivered in batches.

There are three variants of the Model 3 sold in Australia – the base Standard Range RWD model, Long Range and Performance models (both dual motor AWD). Prices range from AUD$69,061 (RM221k) to AUD$112,550 (RM360k) for the sedan, and the estimated delivery period is between six to nine months.

Customers have the option to go with the full self-driving package, which includes Autopilot, Auto Lane Change, Autopark, Summon, Full Self-Driving Computer and Traffic Light and Stop Sign Control. An upcoming feature called Autosteer on city streets will be added via an OTA update, should customers opt for this package.