For sale in 2021, it will be affordable, have a high energy density and a 1.2-million km warranty.

When Reuters said Tesla would announce a low-cost, “million-mile” cobalt-free battery with the help of CATL, we were sure it meant the LFP – lithium iron phosphate – batteries Tesla will buy to build the entry-level Model 3 in Shanghai. The million-mile battery would be an evolution of NMC cells, not necessarily cheap. It would have a single crystal and cobalt – even if eventually less than usual. We thought the company would clarify this with the Tesla Battery Day, but a Chinese company might have done it indirectly. That’s the impression we had when SVolt said it would sell a cobalt-free li-ion battery in 2021. You’ll understand why.

The Chinese company is a spin-off of Great Wall Motor Company and currently a division of Honeycomb Energy Technology. In July 2019, it said it would develop a cobalt-free lithium-ion battery (NMx) that would reduce costs. At that point, it was mostly a promise. In February, we told you a European automaker ordered more than 7 GWh of EV batteries from it. Now, the commitment became a pretty impressive battery pack with very similar characteristics to those promised by Tesla.

The first resemblance is its warranty. SVolt says it ensures it will work just fine for 15 years or 1.2 million km. That is almost 1 million mi: 745,645 mi, to be more precise. Just like the patents that let us know a little more about Tesla’s “million-mile” battery, one of the pillars for the Chinese cobalt-free battery is the use of a single crystal.

According to Yang Hongxin, SVolt’s president, that is the secret for this chemistry to last ten times more than the regular NMC or NMA solutions. Single-crystal use also provides more safety due to its stronger particle strength and more stable structure. But more developments helped SVolt get rid of cobalt for good. 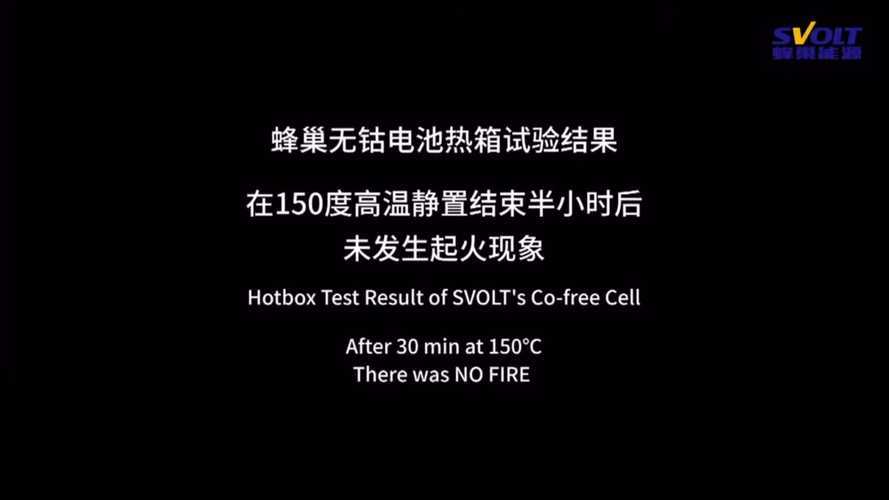 In the video above, Hongxin also names cation doping and nano-network coating. The former increases the upper voltage limit for the cations – ions that migrate to the cathode, which helps the cobalt-free li-ion battery have 40 percent more energy density than an LFP equivalent. The latter is an oxide layer on the single-crystal structure. It reduces side reactions between the cathode and the electrolyte and improves charging and recharging.

Hongxin also speaks about impressive solutions, such as the stacked battery method. SVolt batteries use layered lithium nickel manganese oxide. It is like a film. Instead of rolling it, SVolt folds it back and forth. That makes it have a square format instead of a round one. That alone helps the battery have 5 percent more energy density, and another 10 percent increase in durability, according to the company.

These cells are arranged in the pack in what the company calls an “array-Pack.” It would help the pack achieve an 80 percent weight ratio, something that helps increase its energy density. This arrangement of the cells also helps improve the thermal management system, which is performed by the top and bottom layers.

According to Hongxin, it is 40 percent more efficient than traditional systems. It is very precise, controlling temperature differences within 5ºC, the low-temperature heating is 60ºC/h to 70ºC/h, and the temperature error is controlled between 20ºC and 35ºC. If all that fails, SVolt’s president claims the cobalt-free li-ion battery resists heat tests with no fires.

Hongxin says the Jintan factory has a rigorous impurity control to avoid battery fires due to internal short circuits and that it can verify 2,500 factors in battery production. Other manufacturers would be able to monitor 1,500 factors.

All that reflects in two battery packs that will be put for sale in 2021. The smallest one, with 115 Ah, presents an energy density of 245 Wh/kg and offers a range of 600 km (373 mi). It will be available in June 2021. Hongxin does not mention which car will have it nor its manufacturer, but we believe it will be Great Wall.

The more powerful battery pack offers 226 Ah. It will allow the first car it will equip to run 880 km (547 mi) when it is available in the second half of 2021. Oddly, it has a lower energy density: 240 Wh/kg. In this case, SVolt’s president gave us some tips on which car will have it.

Hongxin says this battery pack is being adjusted to a high-end vehicle of Great Wall, but do not take it literally. Great Wall controls both Ora – the brand that sells the cheapest EV on Earth – and WEY, its luxury division. The 880-km EV will probably bear the badge of the latter.

As you can see, the million-mile battery Tesla claims to be a revolution is probably very similar to SVolt’s. This may be the reason why Reuters has seemingly confused the CATL LFP battery Tesla will buy with that which is supposed to be the most significant announcement for the Tesla Battery Day.

If Tesla’s million-mile cell retains cobalt, as the patents lead us to believe, it will have this disadvantage when compared to the one presented by the Chinese company. Above all, it will have to be much better than the cobalt-free li-ion pack SVolt is now offering to make any impact with its delayed introduction.

If it happens to be not, Tesla will have lost an excellent opportunity to claim Bob Lutz is wrong when he says anyone can buy the same cells that are on its battery packs. Hongxi says two European manufacturers have already contacted SVolt. The 7 GWh order it received in February probably is for these cobalt-free li-ion batteries already. Or else, not only can anyone buy similar batteries: they are already doing it. SVolt’s products may not be million-mile batteries, but they are very close to that. Your turn to amaze us, Tesla.