Nope, we’re not here to talk about Tesla’s Supercharger—that’s another article. This piece is for the folks who love the whistle of ultimate power! I’m, of course, talking about the supercharger that makes internal combustion engines into screamin’ Demons.

Superchargers are pretty much the original macho engine update and are far from a foreign concept to many. Even so, that doesn’t mean you know exactly how they work or when they were invented. Yet the history and function of superchargers are every bit as remarkable as the power gains they bring to the table. 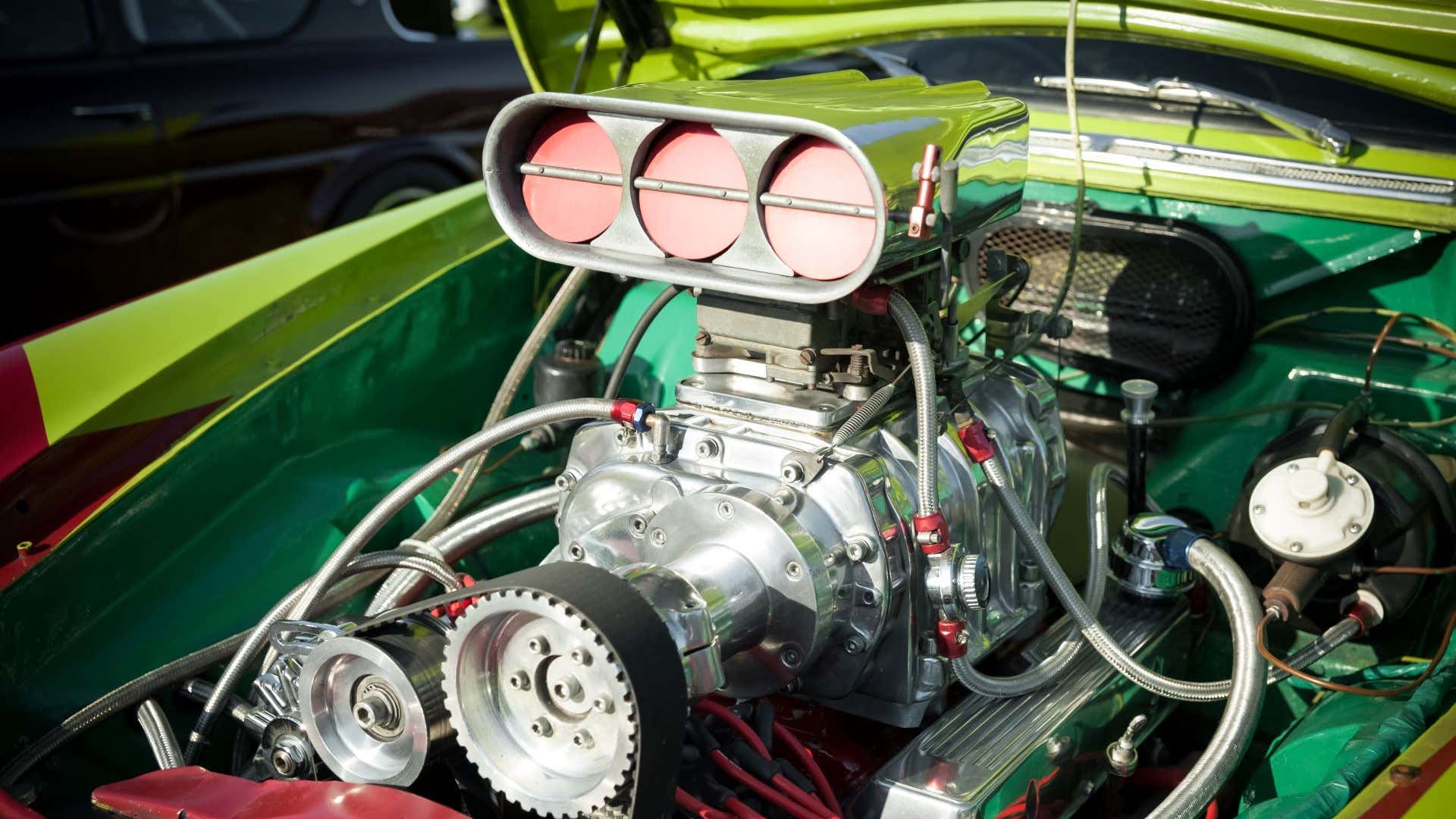 So, strap in as The Drive dives into the boost bible and get you caught up on these seriously sinister squealers.

What Is a Supercharger?

The definition of the word supercharger is as so in the Oxford-English dictionary: “A Part of an engine that supplies air or fuel at a pressure that is higher than normal” And that’s enough for a general understanding but, as with anything else technical, there’s a lot more to know.

Something to understand is that an engine is nothing more than an air pump at heart. The size of the engine directly relates to how much air the engine can displace. A 7.2-liter engine is designed to suck in 7.2 liters of air—that’s 440 cubic inches in American.

To that affect, a naturally aspirated engine relies on the vacuum created by the piston on the intake stroke to draw fuel and air into the cylinders. It’s an ingenious yet simple concept, but it’s not perfect as air can be a funny thing, and atmospheric conditions like temperature, elevation, and even humidity can prevent an engine from operating at its full potential.

This is where a thing called “volumetric efficiency” comes into play. Volumetric efficiency simply refers to the amount of air that an engine is actually displacing versus how much it’s supposed to. A volumetric efficiency, or VE, of 88-95% is about the average for 2-valve engines like the aforementioned 7.2-liter.  That means that the 7.2-liter engine is typically only able to displace 6.3- 6.8 liters of air, or 387-418 cubic inches, under normal conditions.

Enter the supercharger. A supercharger simply works to increase volumetric efficiency. It forces air into the cylinders instead of relying on a vacuum. That helps the engine to hit 100% VE and, sometimes, even more. This will allow you to burn more fuel and create more power. It also positively affects the effective compression ratio that helps increase the bang the mixture makes upon ignition.

When Did Superchargers Originate?

Believe it or not, the concept of a supercharger is kind of ancient. Forcing air into a device to increase efficiency has been a concept put to use since, well, forever. There are those that say the idea comes from moving air into blast furnaces or fresh air down to miners thanks in part to the “Roots” style air pumps being patented in 1860, and, you know, because they were intended for use for those situations! Obviously, hotrodders took advantage as soon as they could.

The idea of using forced induction to improve the efficiency of an internal combustion engine was put into effect only years after the introduction of the 4-stroke cycle in the early 1860s. Sir Dugald Clark, the man credited with developing the 2-stroke cycle, is also credited for creating the first functional supercharger for his engines back in 1878.

While that may be true, Rudolf Diesel patented the first supercharger and slapped it onto his own engine design in 1896.

How Have Superchargers Changed Through History?

By talking about the development of superchargers, we have to dive into the details of their function. That means you’re about to get blasted with a double-headed history/tech lesson.

Here’s the thing. Superchargers really haven’t changed much since 1896. Aside from improvements in construction and design, they’re still pretty close to their roots. [Ed. Note: Leave the dad puns to Jonathon, Hank.]

The roots-style supercharger was the first of the bunch to appear and is probably the first to come to mind for many when superchargers come up. After all, it’s iconic in the enthusiast scene.

This system relies on two rotors within the case that peers through, or lies beneath, the hood to create what is known as a positive displacement pump. The rotors within mesh together just like gears to force out any air trapped between them. When those rotors come apart, a vacuum is created to draw in air. The air is then carried along the inner portion of the casing until it can be forced into the engine and restart the process. 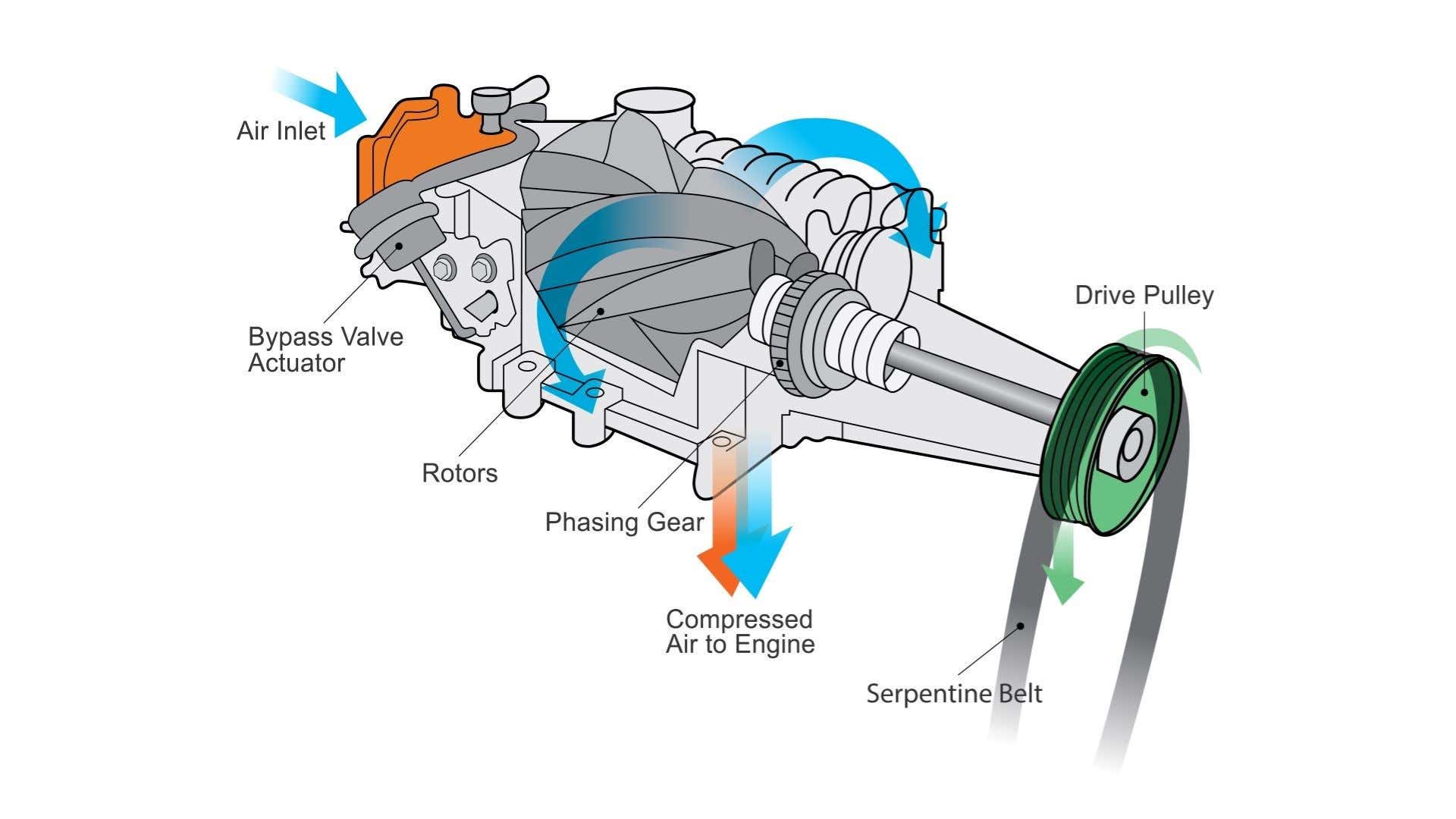 A supercharger X-rayed for your benefit.

The twin-screw design that appeared in the 1930s is essentially an improved version of that original Rudolf Diesel design. These have a similar layout featuring a case and two rotors, only the new design has its rotors that represent a set of meshing screws. The purpose of this design is to increase internal compression, further enhancing the role of a supercharger.

What might come as a surprise is that the twin screws are essentially the latest entry to supercharger systems, outside of the advent of electric superchargers you may have seen today.

Perhaps the most significant entry to the list, the centrifugal supercharger, actually made its first appearance in 1902 when Luis Renault developed it. This system is different from roots and twin screw designs in two ways, the biggest difference being that centrifugal superchargers use a single belt-driven turbine to force air into the engine. The other being that instead of drawing air through the throttle body or carburetor, it pushes it through. 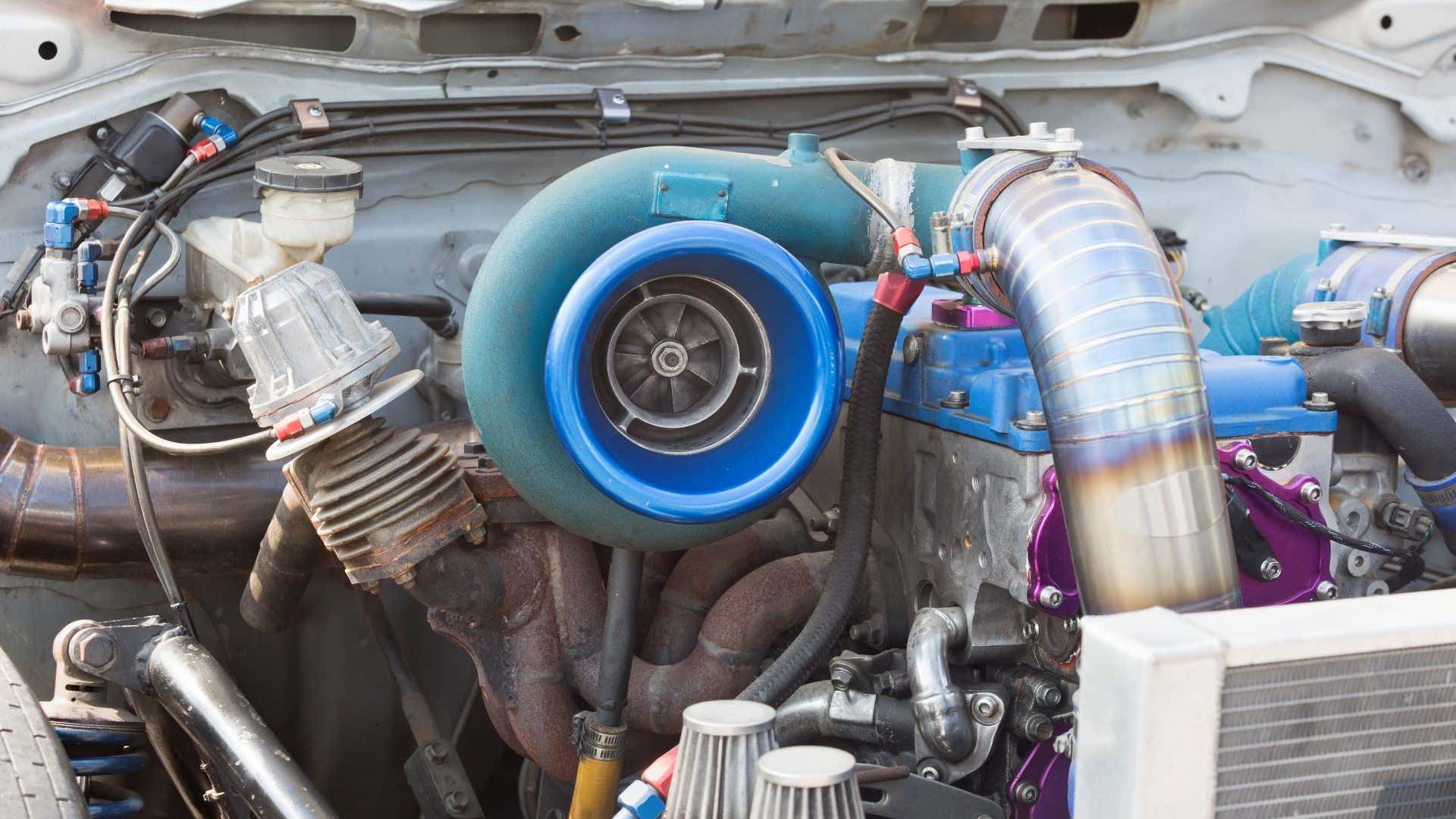 A turbocharger on an engine. Don’t be distracted by that beautiful TIG welding.

What’s the Difference Between Superchargers and Turbochargers?

If you were to look at a centrifugal supercharger, you might say it just looks like half of a turbocharger. Well, that’s because it is.

That’s why a centrifugal supercharger looks like half of a turbocharger. A turbocharger has two turbines that are directly linked to one another. When the turbine on the exhaust end is spun, it causes the intake side to rotate and force air into the engine. This is a far more efficient design due to the elimination of parasitic loss, which translates to a more significant increase in power.

Oh, and turbochargers aren’t anything new either. The turbo was introduced by a Swiss engineer named Dr. Alfred Büchi back in 1905—just a few years after the introduction of the centrifugal supercharger. The more you know! 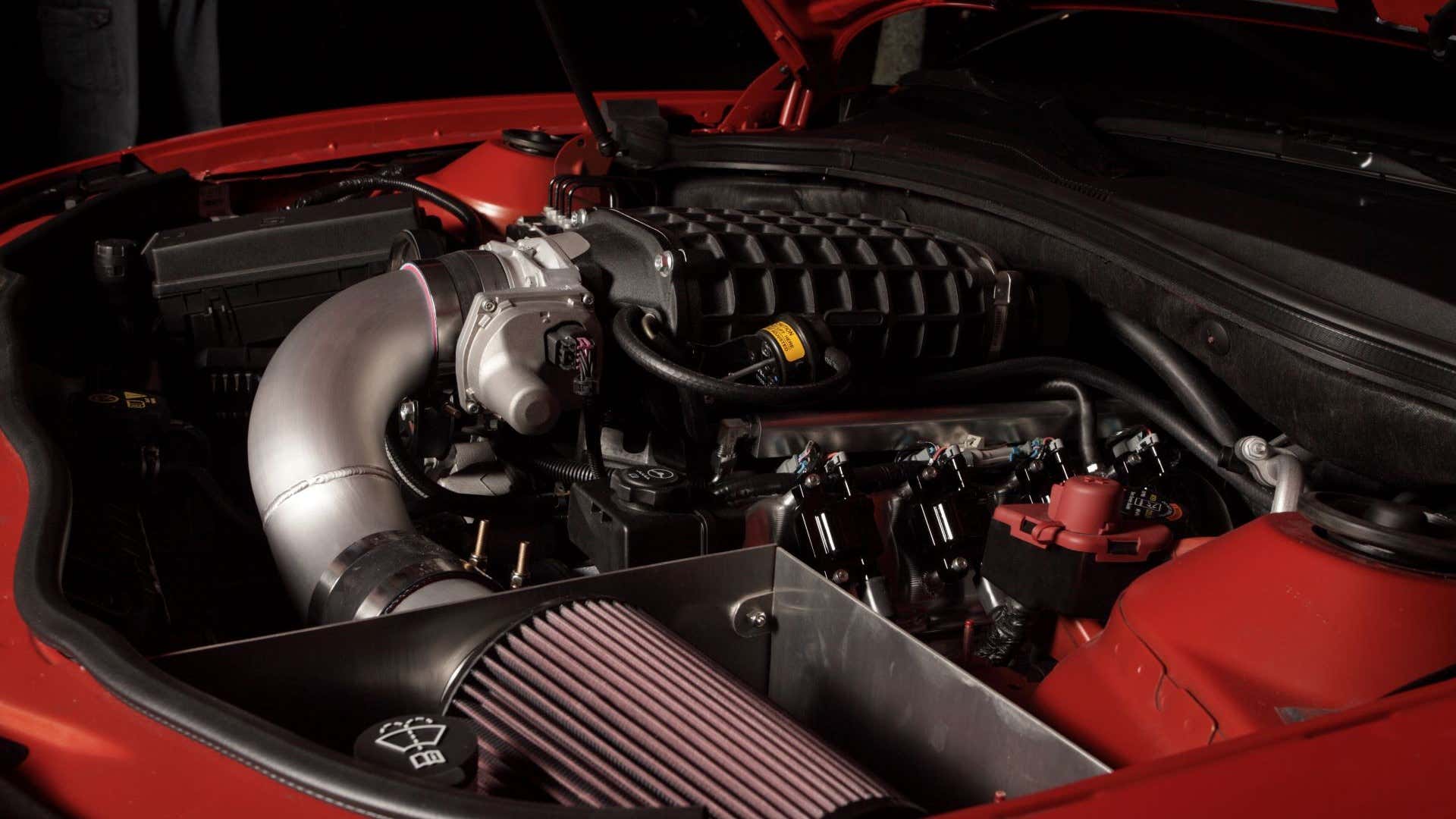 So Do Any Modern Models Feature Superchargers From the Factory?

If you classify turbochargers as superchargers, you will find that more than 30% of all vehicles produced today feature superchargers. But, if you’re like us and want to get technical, far fewer feature the classic belt-driven supercharger you’re thinking of.

Currently, there are about 20 models that come with a blower, including the Camaro ZL1, Jaguar F-Type SVR, Mustang Shelby GT500, and of course, the Dodge Challenger Hellcat. 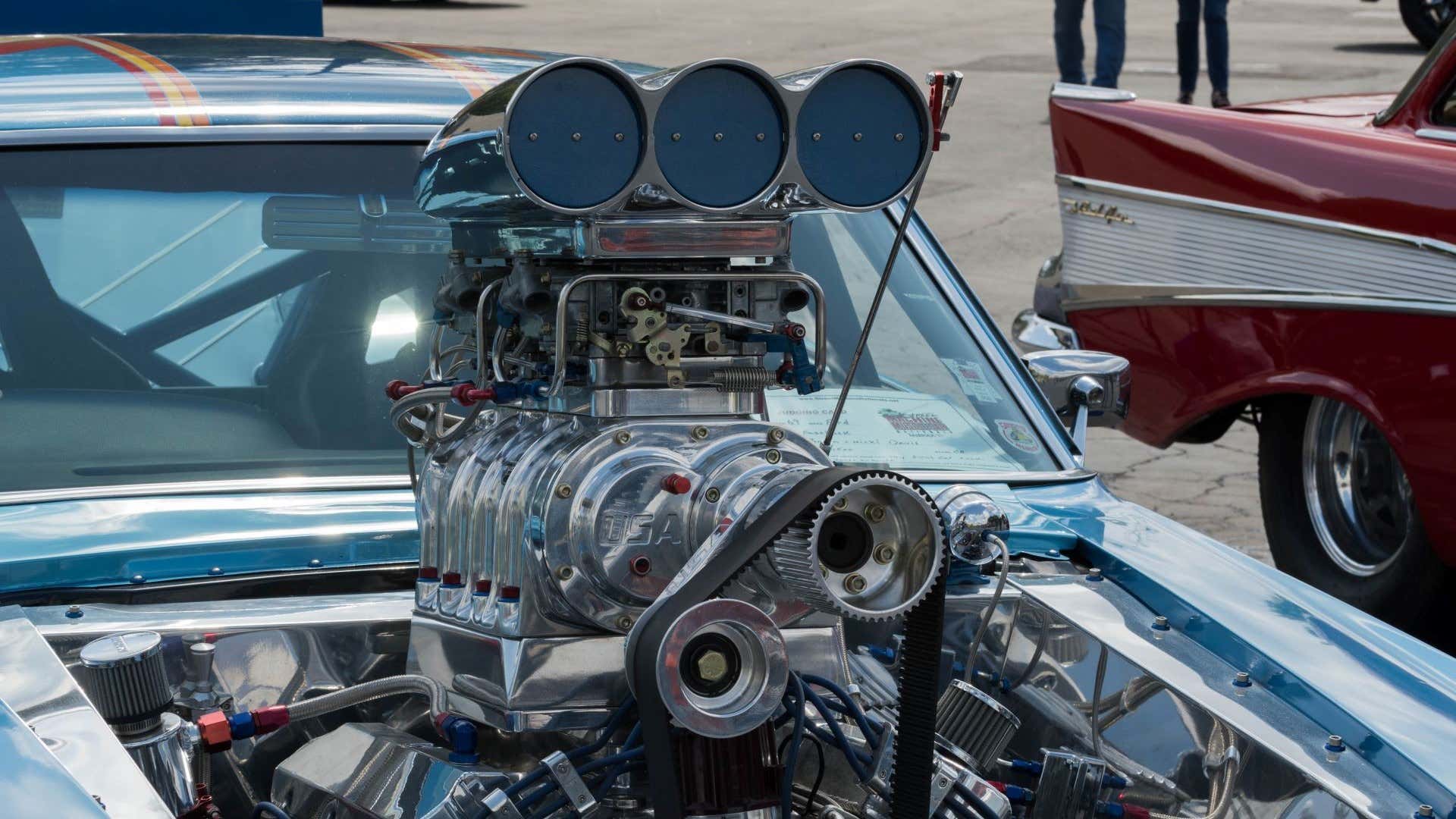 A Brief History of Superchargers in Racing

Superchargers made their debut as a factory option way back in 1921 when Mercedes-Benz bolted them onto the Kompressor model vehicles, which really starts their racing use then. That means even if we only covered the high points, we could still go on for decades on the history of superchargers in racing. So, let’s talk about what is likely the most profound thing to occur with the use of superchargers on the track.

Back in 1953, a man named Don Hampton took a GMC pump and planted it on a 354-cubic inch Chrysler Hemi used in a drag car. Sounds pretty standard, right? Well, yeah, that’s because superchargers and drag cars are best friends. The thing is that the roots-style pump wasn’t intended for use on a Hemi. Or even an engine!

The pump was actually designed for use in industrial equipment as a scavenge pump, meaning it was sucking, not blowing. But Don saw the designation attached to these pumps read something like 8-71 indicated, meaning the pump was intended for an engine with eight 71-cubic inch cylinders. That was a lightbulb moment as racers like Don saw these pumps’ displacement capabilities as a great way to cram air into an engine and make enormous power. It took some serious ingenuity to make it all work, but the results are nothing short of legendary

Not only did Don’s idea work, but it ultimately changed racing forever. Don ultimately went on to become an NHRA champion drag racer and Hall of Famer, and eventually set up Hampton Blowers. Not only is his business still in operation today, but it’s responsible for shaping an entire division of automotive parts. In other words, if you’re a sucker for blowers, Don’s one of the folks you have to blame for your obsession.

Funny enough, the fastest drag cars in the world still rely on a similar setup to what Don and other like-minded racers had come up with back in the day.

You’ve got questions, The Drive has answers!

Q: Which is better, a supercharger or a turbocharger?

A: Either has its strong point, and both have their flaws. Turbochargers offer the benefits of superior efficiency, as they don’t create a parasitic loss. Superchargers create drag on the engine, but they make instant gains in power. Turbos typically suffer from lag as it takes time for them to build boost. This is a very general overview, but you can understand when either is a more desirable option.

Q: Is a supercharger bad for your engine?

A: It ultimately depends on the engine and the supercharger you’re trying to install. Simply adding a blower to any stock engine can pose several potential issues. The cam grind, valve springs, and head gaskets might not withstand or adequately control the increase in pressure.

Furthermore, the rotating assembly, hardware, and block might not be up to task to handle the power increase either, and the results can be catastrophic. There are plenty of variables at play, and obviously, there are combinations that work just fine, but you need to research before throwing a supercharger on any old engine. Let’s also not forget that the fuel system and ignition timing also need to see their share of updates to keep up.

Q: How much HP does a supercharger add?

A: The average increase in power is about 46 percent. So, an engine with 100 horsepower would likely see a bump to 146 horsepower. That is just an average, though, and there’s plenty more at play. Some combinations see fewer gains while others see more. No matter the case, the improvements will still be rather significant, which is why you need to be willing to read into the power you can expect and compare it to the engine’s current threshold.

Q: What are the three types of superchargers?

Q: Can you run nitrous with a supercharger?

A: Yes. Nitrous is a power adder that can be stacked onto a forced induction system. The results are insane power gains. While that does seem desirable, you’re on the fast track to blowing your engine’s guts out without a proper tune and beefy bottom end.

No matter how smart we are, we can’t be your only source of information. The more brains you can pick, the better. That’s why we’ve attached this killer video to help you continue to learn more about superchargers!

Let’s Talk: Comment Below and Reach Out to the Guides & Gear Editors!

We’re here to be expert guides in everything How-To related. Use us, compliment us, yell at us. Comment below and let’s talk! You can also shout at us on Twitter or Instagram, or reach us all here: [email protected]