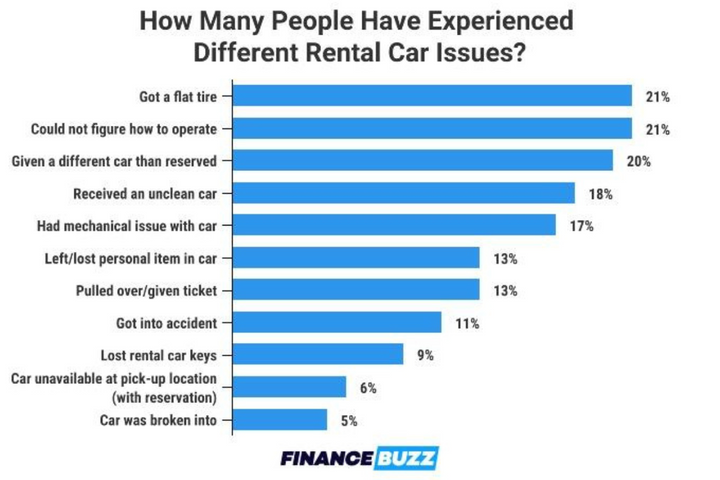 FinanceBuzz released the results from its recent survey of U.S. adults who have rented a car at least once to find out which issues and behaviors they experienced when renting a car.

The survey revealed 69% of people who’ve rented cars reported some kind of negative rental experience. For instance, more than one in five renters, 21%, said that they had gotten a flat tire in a rental. The same percentage said that they were unable to figure out how to operate critical vehicle functions such as the lights or windshield wipers.

One-fifth of people say they received a vehicle that was different than the one they reserved, while 18% were given a rental that was dirty.

Meanwhile, 17% of people say they experienced mechanical issues in a rental car before.

When asked what kinds of ethical lines renters crossed while renting a car, 40% identified at least one thing they had done that would give a rental agency pause. Many of these are explicit violations of rental agreements.

Another 17% of renters said they drove more miles than they said they would with their rental, while 13% said they allowed an unauthorized driver behind the wheel.

When it comes to insurance, the most common approach is to pay extra for insurance coverage offered by the rental company, something that 40% of people chose. One-third of people use their own auto insurance policy to cover the rental car.

In terms of filling the gas tank, nearly four out of five people (78%) opt to fill up the tank on their own before returning the car. A little less than one-fifth (18%) pre-pay an agreed-on price with the rental agency so that they don’t need to fill up before turning the car back in, while just 4% return the car without a full tank.

Over one-third of people (35%) said that they have considered purchasing or leasing a specific car model following a positive rental car experience. Almost a quarter of people (23%) are taking a more active role in using rental cars to influence purchasing decisions by intentionally renting a model they were already interested in and using the rental experience as a sort of extended test drive, according to FinanceBuzz.

Another trend among renters is a turn towards services and apps such as Turo that allow people to rent cars from individual owners instead of renting from traditional agencies and companies. Less than one-third of people (30%) say they would not be open to renting from such a service, meaning that the majority of people have either rented a car from an individual owner before (26%) or would be willing to try it in the future (44%).