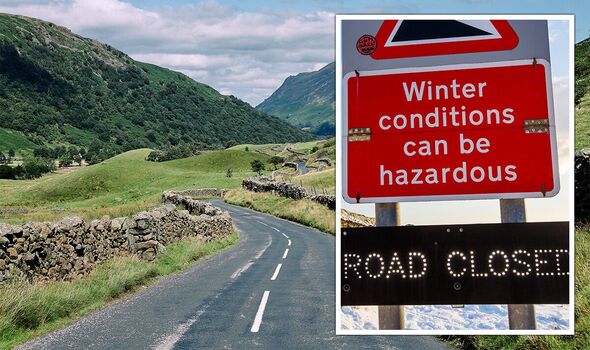 Road safety experts at Road Angel have named the six most dangerous routes across the UK that drivers should completely avoid this winter, for fears of serious accidents and fatalities. The experts added that wintery conditions that swept the country last week could continue, and the rail strikes are forcing more people onto the roads.

With motorists still needing to travel in these adverse conditions, experts have named the six most dangerous routes everyone should avoid.

From Hardknott Pass in the Lake District, to the Devil’s Staircase in Wales, these roads are dangerous enough as it is – with hairpin bends and steep gradients.

But in the winter weather, these routes are even more dangerous, with the risk of skidding, significantly reduced visibility and freezing temperatures.

With some areas in the country likely receive extreme weather warnings again, millions of drivers are being told to stay safe when travelling.

A spokesperson for Road Angel said: “With some of the worst winter driving conditions set to continue well into 2023, you must remain extra vigilant when driving to avoid serious accidents on the road.

“Many of these roads have stunning views – like the picturesque scenes of the Scottish Highlands along Glen Quaich, but such sights can come at a cost in winter.

“Steep gradients along these roads make driving with ice on the road extremely hazardous because of the heightened risk of skidding.

“Motorists must first note that the Highway Code tells drivers to completely avoid driving in snow and ice unless the journey is essential and if so, they should use a high gear and slow speed.

“But for those who are travelling in adverse conditions over the wintertime, there are several routes across the country you should avoid completely.

“In fact a few of these roads, like Kirkstone Pass in the Lake District, are sometimes closed to motorists in the winter because of how dangerous it is to drive along.”

The Kirkstone Pass in the Lake District is the highest road in the National Park, 454 metres above sea level. But this means there are bends and slopes all the way up this road, with a 17 percent gradient at some points. As well as being steep and twisty, the Kirkstone Pass is also very narrow at some points. Despite the beautiful scenery over the Lake District, drivers may not even be able to see it because of the thick mist throughout the colder months. Kirkstone Pass’s steep and narrow features make the road very dangerous to drive on in adverse conditions, and the road is closed when there are bad winter conditions because of the risk it poses to drivers.

This picturesque drive in the heart of the Scottish Highlands is a beautiful, yet risky route for motorists. Several parts of the road are extremely narrow with few passing places along the way – as well as a steep gradient of up to 17 percent, sharp hairpin bends and no road markings. These conditions make Glen Quaich an extremely dangerous road for motorists to navigate over the winter months.

Hardknott Pass is another dangerous road in the Lake District, as it is known for being the steepest in England. This single track road reaches a massive 33 percent gradient at one stretch and the several tight bends make the Hardknott Pass one of the hardest roads to drive on in the country, nevermind during the winter. The road surface is in a bad condition meaning it gets very icy and slippery during adverse conditions, and the pass often gets closed because of the ice. With reduced visibility and extreme gradients, Hardknott Pass is extremely dangerous and often impassable for winter motorists.

4. Petworth, West Sussex to Chichester, A285

This section of the A285 warns motorists to drive with caution during all conditions. Long and fast straights see cars spinning off in icy conditions, and the several sharp, unexpected bends provide very little visibility, especially in the winter mist and fog. Collision rates along this stretch of road are often hailed as a cause for concern but there are still frequent crashes, which is only made worse during the winter conditions.

Named after the Cat and Fiddle Inn at the summit, this road has stunning views of the countryside, but which come at risky consequences. Often named the most dangerous road in the UK, the Cat and Fiddle between Deryshire and Cheshire has an abundance of blind bends, often which are unexpected for drivers. Despite reducing fatalities since road safety measures have been implemented, many serious accidents and incidents still occur. Over the winter time the sharp bends combined with reduced visibility from the weather, and a slippery, icy road surface, make driving along the Cat and Fiddle even more dangerous.

The clue is in the name for this stretch of hairpin turns settled in the Cambrian Mountains, Wales. With a maximum gradient of 20 percent along the sharp bends, the Devil’s Staircase is an extremely dangerous and narrow single track road for winter drivers. The road surface is often damaged from adverse conditions and given its remote location, the Devil’s Staircase can be hard to reach for those in danger, and it’s even a struggle to reach a phone signal to call for help.