Peugeot chose the Consumer Electronics Show 2023 in Las Vegas to reveal its latest concept called Inception. However, the fact that this study was revealed in United States doesn’t signal the French marque’s US return, however it does show the way forward for its next-gen electric vehicles that will be sold around the world.

All the vehicles that Peugeot will launch starting in the near future will draw inspiration from this very sharp looking concept that should herald the arrival of some bold looking EVs. It’s especially bold inside.

The most dramatic part of the exterior has to be the rear end which comes to a very sharp edge that we’re sure will be seen again in the production cars inspired by this concept. They won’t be this extreme, but a stylized version of this will certainly be seen again.

From the side the concept appears to have a long hood, like you would see on a traditional grand touring car with a large engine up front. However, as you move around to the front, you see the the windscreen extends down into where an engine would have been in an ICE vehicle, and we presume this is some kind of aerodynamic feature.

Expresses the brand’s timeless feline attraction and shows how optimistic we are about the future of the automobile and the emotions it arouses. Bright and shiny, Peugeot Inception Concept reinvents the spatial experience of driving and illustrates some of our ideas for reducing the carbon footprint of the brand’s cars by more than 50 percent by 2030.

Two electric motors make this vehicle all-wheel drive and give it a combined output of 680 horsepower (500 kilowatts) enabling it to go from 0 to 100 km/h (62 mph) in less than 3 seconds. It draws from a large 100 kWh battery pack that gives it a claimed range of 800 kilometers (497 miles) on one charge.

This impressive range from a battery pack that while big isn’t massive by current standards comes courtesy of its efficiency. It’s apparently able to use just 12.5 kWh/100 km, equivalent to a very impressive 4.9 mi/kWh, not far off the highly aerodynamic Lightyear 0 solar EV, which can muster 10.5 kWh/100 km or 5.9 mi/kWh.

The manufacturer doesn’t state the concept’s exact charging rate, but it does say the vehicle runs on 800 volts and is capable of replenishing 150 km (93 mi) in just five minutes; that’s 30 km (18.6 miles) in one minute. The architecture used to underpin everything is Stellantis’ STLA Large platform and the concept is around 5 meters (196 inches), as well as very low standing just 1.34 meters (52.7 inches) tall. 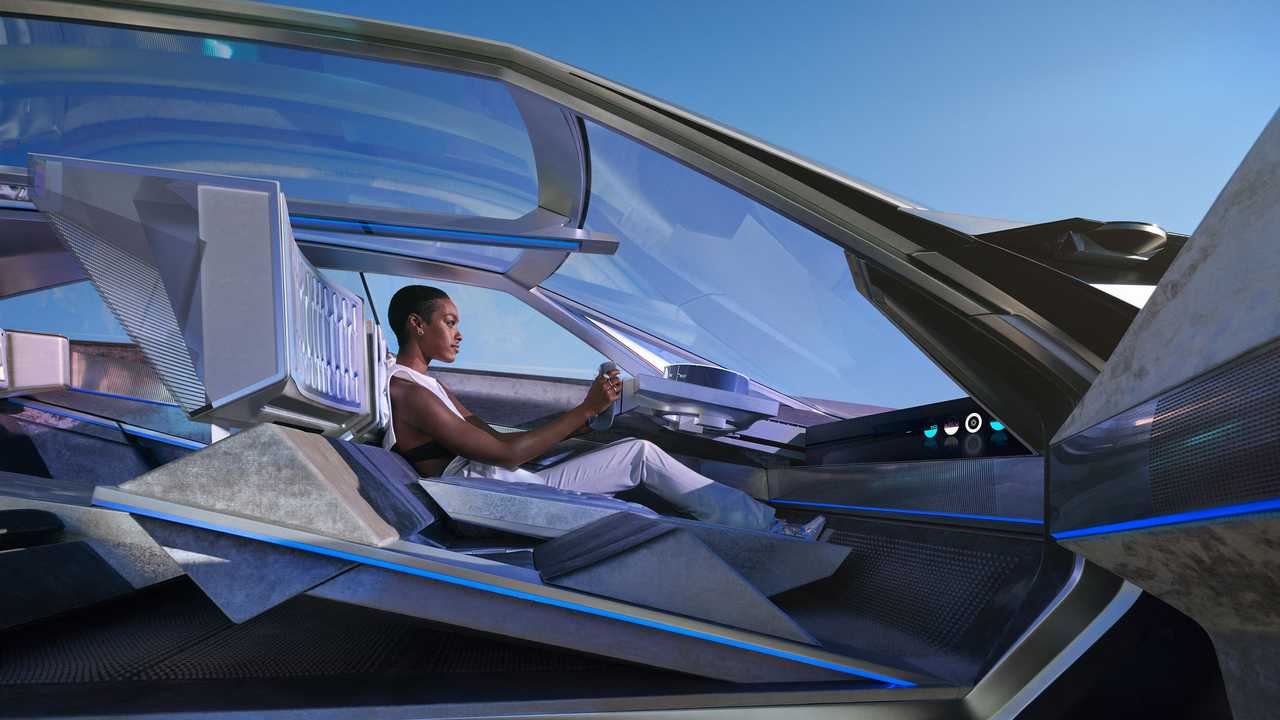 Peugeot also promises that this concept delivers on the driver enjoyment front too. This in spite of the fact that it has steer-by-wire and a rectangular steering… device that the automaker calls Hypersquare. It’s basically a screen that you can steer the car with.

You will also notice in the photo showing a model sitting in the driver’s seat that the driving position is really low and sporty.

Recent production Peugeots have all had very futuristic and boldly designed interiors and the Inception concept suggests that the automaker has no intention of stopping. So while you shouldn’t expect the materials and surfaces you see inside the Inception to make it into a production car, some of the shapes and ideas certainly will, albeit in more watered down iterations that will be easy to mass-produce.

Customers have high expectations of the electric car. With our next-generation “BEV-by-design” platforms dedicated to electric vehicles, we will meet their expectations. We will surprise them with a new organization of the space of our future cars, simplify driving gestures and reinvent the on-board experience.