Nelson Piquet Jr scored his first podium of the year in the Brazilian Stock Car double-header at Santa Cruz do Sul, while Rubens Barrichello also shone with an outstanding recovery from a poor qualifying that moved him to third in the points race.

After taking pole position on Saturday, Julio Campos dominated the first race on Sunday. He claimed his fourth win in the series, his first since 2016. Two-time champion Daniel Serra finished second and reclaimed the leadership of the 2019 title race.

Former points leader Thiago Camilo started second, but retired early due to engine failure – and he also failed to start race two. Because of the oil spilled from the engine, Felipe Fraga and Gabriel Casagrande went off.

In race two, Ricardo Mauricio started from the back of the grid, but the two-time champion managed to finish first after beating Denis Navarro at the finish of a thrilling race. Piquet completed the top three for his first podium this year. Guga Lima finished fourth, ahead of Galid Osman, while Zonta and Barrichello were 11th and 12th, respectively.

“This is a track I did not know,” said Piquet. “We had a hard qualy, so it’s a relief to get this podium, which is very good for the championship and for the mechanics. They worked hard and deserved a good result.

“I want to thank the team for all the effort and strategy we have adopted in both races. We still have work to do to reach the leaders’ speed, but we are arriving and, every weekend, developing a little bit.

“Today I had a new helmet, more like my father’s, and I think it was he who gave me luck.” 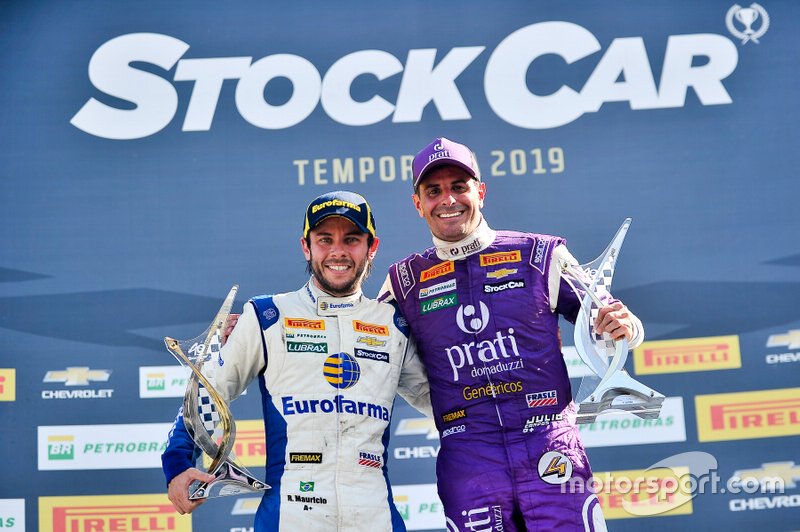 Mauricio’s win vaulted him to the second place of the standings, while Barrichello is now third in the championship.

“It was a fight day,” said Barichello. “We had an accident in race one and ended up changing our tire strategy. I had to hold onto the track to score a few points even with the degradation.

“In the last two stages, we have faced some problems, but we are going to keep our heads up, working to continue going forward.”