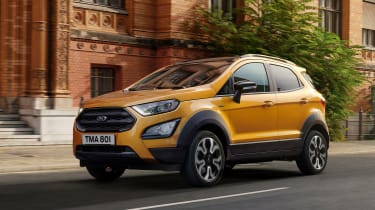 Ford has expanded the EcoSport’s line-up, adding its off-road inspired Active trim-level to the crossover’s range. It’ll join the existing Fiesta Active and Focus Active in UK showrooms early next year, with prices starting from £21,645.

Other optional extras include HID headlamps (£500), a detachable tow bar (£500) and a winter pack (£300), which adds heated seats and a heated steering wheel. Finally, buyers can spec Ford’s driver assistance pack for an extra £600, which adds front parking sensors, a blind-spot monitoring system and an automatic high beam function.

There’s just one engine choice on offer – Ford’s turbocharged 1.0-litre three-cylinder petrol unit. The engine develops 123bhp and 170Nm of torque, which Ford says is enough for a 0–62mph time of 11 seconds and a top speed of 111mph. The unit is mated to a six-speed manual gearbox and can return up to 47.9mpg on the WLTP combined cycle.

What do you make of the new Ford EcoSport Active? Let us know in the comments section below…