Hot on the heels of the hardtop Ares S1, a Barchetta variant has been revealed 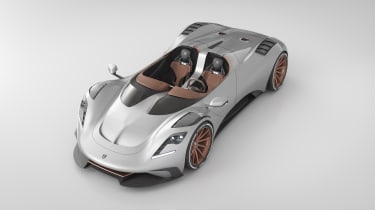 Like the hardtop, production of this Barchetta variant will be limited to just 24 units, and Ares is currently taking orders. Prices are yet to be officially announced, but Ares has hinted that it’ll start from around £600,000, which makes the roadster roughly £150,000 more expensive than the coupe.

Ares – led by ex Lotus boss Danny Bahar – is yet to build one of the 24 S1 Project Spyders, and these images are just computer renders for the time being. However, they show that much of the car’s styling will be identical to the hardtop model’s. It shares the same nose cone, haunches and rear diffuser – with the only major difference being the roof and windscreen arrangement.

Rather than opting for a retractable roof, Ares Design has simply hacked it off, essentially turning the S1 into a rival for the McLaren Elva. The standard car’s windscreen is gone, too, but to retain a bit of comfort in the cockpit, the firm’s engineers have designed a pair of aero screens, which funnel air around the occupants and towards the engine intakes.

The cabin of the S1 Spyder is trimmed in a blend of Nappa leather and Alcantara. Buyers will also get a digital instrument cluster, a slimline infotainment system and an extra screen for the front passenger, which displays items such as speed and navigation.

Like the hardtop S1, this Barchetta model will be powered by a naturally aspirated 6.2-litre V8 engine which develops 705bhp. The unit will send power to the rear wheels via an eight-speed automatic gearbox, and Ares says the new chop-top variant will have the same 2.7-second 0–62mph time as the hardtop.

Chassis specs are yet to be confirmed, but we expect the S1 Project Spyder will share the same double wishbone suspension, forged aluminium axles and adaptive dampers as the hardtop model. The same aggressive aero package also features and, like the standard car, all of the Spyder’s body panels are made from carbon fibre.

What do you make of the Ares S1 Project Spyder? Let us know in the comments section below…