When YouTube influencer Doug DeMuro reviewed the Rivian R1T last year, he gave it the highest-ever score for a pickup truck, although the GMC Hummer EV Pickup later matched its rating.

Now, DeMuro has managed to get his hands on a Rivian R1S to review, which begs the question: will the electric SUV get a “Dougscore” that will crush all the other SUVs he’s tested so far?

The answer is a definite yes, but the R1S doesn’t just outclass all the other SUVs featured so far on Doug’s channel; it also gets the highest-ever score of ANY vehicle Doug DeMuro has tested so far, matching the tally of the legendary McLaren F1.

So what is it about the Rivian R1S that has made such a profound impression on this reviewer? Well, pretty much everything, or better said, the fact that it does everything so well.

For starters, Doug is a big fan of the SUV’s boxy, squared-off styling, which helps the R1S stand out in a sea of teardrop-shaped electric SUVs, although the front end styling isn’t his cup of tea. Then there’s the fact the R1S is not that big, undercutting the R1T pickup by 17 inches (430 millimeters) for a total length of 200.8 inches (5,100 mm).

Of course, that doesn’t make it a small vehicle, since it has a similar footprint to the BMW X7, but it’s nowhere near the size of a Chevrolet Suburban, for example. 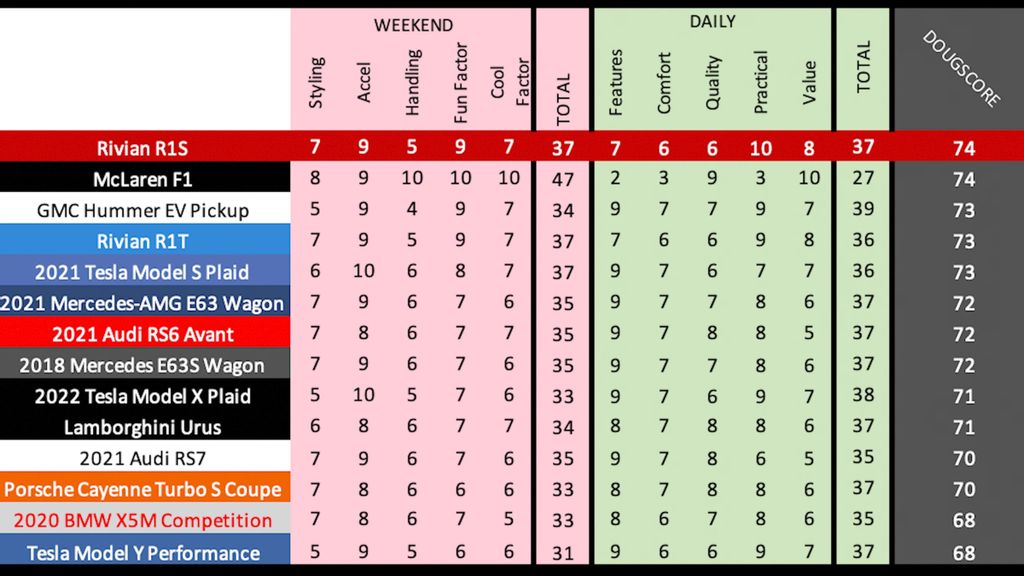 The practicality of the R1S is another aspect that has won Doug over, and not just because of the standard three-row seating. He is also impressed with the decent cargo space in seven-seat configuration, cargo tie-downs, two-piece tailgate, many storage spaces, power outlets and USB ports across the cabin, as well as gimmicks like the built-in air compressor, speaker, flashlight and more.

Doug also likes the clever features and modes of the Rivian R1S and spends a lot of time demonstrating them and interacting with the center screen, which can control pretty much every function of the vehicle.

As you would expect from a video coming from this channel, the review focuses a lot on the quirks and features of the Rivian R1S—this is definitely the video to watch if you want to discover every single feature of the vehicle—and less on the driving experience.

That said, he does mention the R1S’ supercar-like acceleration and stellar off-road capability, a combination very few vehicles can pull off. Handling is not that great though, and the ride is a little rougher than what rival SUVs offer at this price point.

Another letdown, albeit a small one, is that the level of luxury does not match similar offerings from luxury brands. Obviously, DeMuro mentions other gripes he has about the R1S, but the list is unusually short for him.