Rivian has clearly aimed its R1T and R1S models at outdoorsy types who will really take the vehicles off beaten paths, and it’s been adding features to make their lives easier. The automaker recently added Camp Mode, which is a new standalone app that has several unique features that will make camping in the wilderness better.

The biggest feature Rivian added with Camp Mode is the ability to level the vehicle using its air suspension if you park it and want to set up camp on an incline. If you’ve ever tried to camp with your vehicle on a slope, then you will know it can be surprisingly difficult and frustrating to cope with, which is why it’s always recommendable to find a flat spot to camp.

But with the new levelling feature, the R1T or R1S will try to keep itself straight by raising or lowering each corner of the vehicle individually. This should make everything from cooking in the vehicle, or even just opening and closing its doors way easier and it will also provide a level platform for sleeping and tent building. 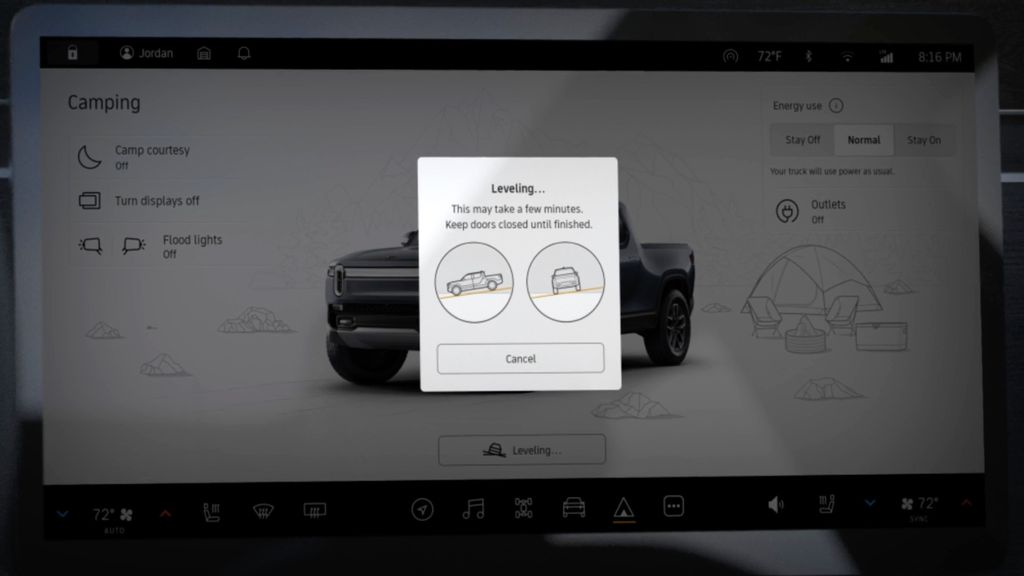 Rivian also tried to maximize the vehicles efficiency while in camping, in order to preserve as much battery as possible when camping far from a charger. The vehicles will feature “Stay On” and “Stay Off” modes, which as their names suggest will either keep the vehicle’s systems online, or keep everything off in order to preserve battery – this includes the central screen, the Gear Guard system and pretty much everything (including the chime played when you open a door) that would sap power from the vehicle.

There’s also a new Camp Courtesy mode that prevents all exterior lights from turning on and it also sets the climate system to run at a lower setting so as to make less noise – this mode is designed for those instances when you would be camping in close proximity to other people to help you not disturb them.