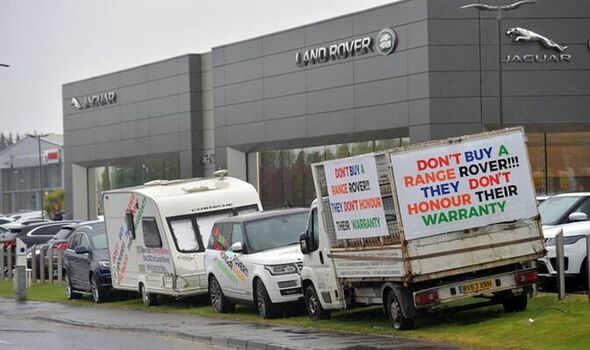 Michael Cox, 36, left his Range Rover, a van, a caravan and other vehicles outside the Stratstone Land Rover dealership near Grangetown, Cardiff, three weeks ago. The driver claims Land Rover has not honoured an extended warranty he took out on his eight-year-old Range Rover Vogue SE, which he bought from the dealership in 2018.

Michael says he has since had a series of problems with the vehicle, which led to its engine failing last December. He claims he has had to take it back to the dealer “around eight to 10” times and is now fed up of the firm “messing people around”.

Although Michael has received an injunction ordering him to move the vehicles by Saturday, he says he intends to move them to another Land Rover office.

Speaking to Wales Online, he said: “I told Land Rover’s head office, I’m going to move it around all your dealerships and make a point, because what you’re doing is wrong. I’ve had to send that car into the dealer eight times because of the coolant problem, the engine has gone bang because of the coolant problem and they’re trying to blame me. It’s not like I’ve taken it to a back street garage, I’ve brought it back to the main dealer.

“They need to stop messing people around and instead give them the service that they expect to get. In my case, they are just trying to backpedal now and are using excuses. It’s ridiculous.”

In my case, they are just trying to backpedal now and are using excuses. It’s ridiculous

Land Rover said it was investigating the cooler issue Michael has reported.

But Michael, who for the past two years has bought the premium warranty at £2,000 per annum, is unhappy with the service.

He added: “Since I’ve owned the vehicle, bearing in mind it’s only got 42,000 miles on it, it’s been back and forth to the main dealers with a coolant problem. I’ve taken it in to the main dealer around eight to ten times and they’ve never got to the bottom of the issue.

“It went back in last December with the problem, and two days before Christmas they phoned and said my car was ready. The following morning, the cooling light came on again, so I went back to them and said about it. They told me that it was probably an airlock and I should keep the water topped up, and if I had any further problems I should come back in the new year.

“Well, over Christmas, the engine went bang. I took it back in at the start of January and asked if they would replace it, but they said no. They said I had driven it because it was hot. But they told me to drive it – I’m not going to blow my own car up for the sake of it.”

The motorist claims he purchased the car with an original two-year warranty, which he has extended by an extra 12 months for the last two years, at the cost of £2,000 per year. He claims the company is now telling him it won’t pay out because the car is eight years old.

He said: “I told them that on their warranty it clearly says it covers vehicles up to 10 years old or under 100,000 miles. They charged me for an extended warranty and now they are using the excuse that the car is too old. Why charge me for the warranty if it’s too old? The car is seven or eight years old with 40,000 miles on, and it’s immaculate.”

Frustrated with his situation, Michael decided to make his point by leaving the Range Rover outside the dealership he bought it from. The car is now wrapped with messages including “Don’t buy a Land Rover! They don’t honour their warranty,” and “How can Thierry Bollore – the CEO of Land Rover – let it get to this?”.

Michael says that he has received an outpouring of support from friends and strangers alike since launching his protest. Despite attempts by Land Rover to cover the car with material, Michael’s supporters have helped ensure his message remains visible to the general public.

“I’ve had a hell of a lot of support from it, social media wise,” he continued.

“People offered to lend me their vehicles and to help me pay for the wrap. People even offered to leave vehicles there for me – the other day a friend of mine wanted to put a 40-foot trailer there.

“A friend of mine was actually driving down Hadfield Road and he watched them put the cover on. He rang me and asked if I wanted him to take it off, so obviously I said yes.”

A spokesperson for Land Rover said: “Land Rover always aims to provide the best customer service. We’re currently investigating this case and are in regular contact with the customer concerned.”