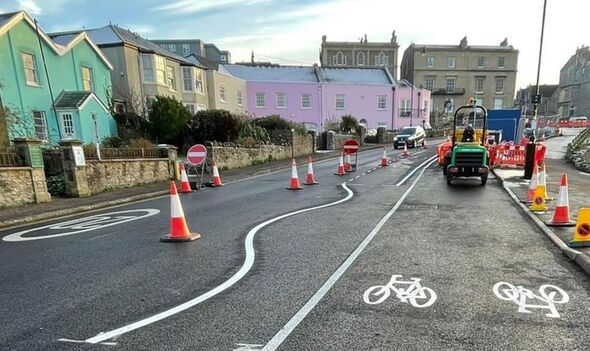 Changes to a road along a busy seafront have been branded the “most bizarre” the RAC has seen.

Safety chiefs at the leading motoring organisation have hit out at the alterations made to the street in Clevedon, Somerset, describing them as “confusing” and dangerous.

A 400-metre segregated cycle lane has been installed, parking has been reconfigured and the road has also been made one-way.

But RAC road safety spokesperson Simon Williams: “This is one of the most bizarre new road schemes we’ve ever seen. “We fear North Somerset Council is making waves for all the wrong reasons as their new wavy road markings could accidentally prove to be a road safety risk due to the confusion they create for drivers.

“This would no doubt be the very opposite of what they were trying to achieve. It seems like imagination may have got the better of the council.

“It makes us wonder whether they’ve tried to solve a problem that didn’t exist with this one-way project and, in turn, created another one by forcing traffic onto other roads. Let’s just hope that the scheme delivers on its active travel objectives and proves money well spent – and that more road users of all types get to enjoy Clevedon’s seafront and historic pier.”

The authority says the aims of the changes are to remove cyclists from along the prom while providing pedestrian priority crossing points over the cycle route.

New wiggly lines installed as part of the scheme have also been painted, with local residents claiming they have made the town’s seafront into a “Balamory from Hell” and have left residents baffled as to their purpose.

But North Somerset Council has defended the layout and said the wavy lines are a design feature aimed to reduce unwanted parking and help the road feel narrower and reduce speeds. It also said the lines were due to be finished with a surface treatment in the spring.

A spokesman for the council said: “The short stretch of wavy line at the roadside is a design feature that creates an unconventional highway environment with the combined effect of both slowing traffic down and discouraging parking at the roadside. The markings are not yet complete and once the road’s top surface has been applied the full effect will be realised.

“This work will be carried out in the spring. Safety is a priority and a road safety audit was completed when the scheme was designed.

“There will also be a further one undertaken when it’s completed.”