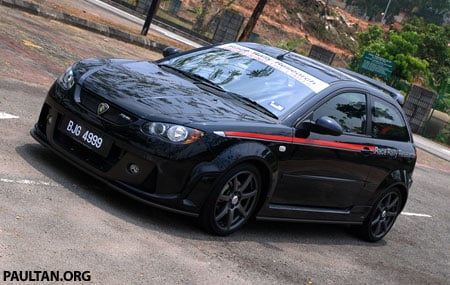 It’s been quite some time since we’ve heard from Proton’s Race Rally Research division. The last cars that they had put their tuning touch on was Proton Waja MME and the Proton GEN2 MME back in 2006. Because their first product was the Proton Satria R3 based on the Satria GTI, many have been anxiously waiting for the R3-tuned version of the Satria Neo to debut. The wait is over, and the Proton Satria Neo R3 is here.

Read my test drive report after the jump. 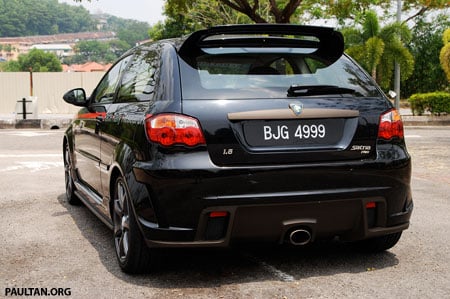 Firstly it’s important to note that this is not the same Proton Satria Neo R3 as the model buyers are going to receive. The car I drove was the development unit and some specifications differ. For one, the Neo R3 will come with slotted front brake discs and Mintex M1144 performance brake pads, but the car you see here had the stock brake discs and brake pads fitted.

The wheels are also not the same – the test unit came with 17 inch Enkei alloys, but the production Satria Neo R3 will come with Advanti SG15 17×7 inch wheels. The tyres are the right ones though – Bridgestone Potenza RE001 Adrenalin in 205/40R17 size, but even these were not in the best condition when I picked the car up. Nevertheless, the Adenalins are fantastic tyres and I am using them on my Proton Perdana.

The 1.6 litre Campro engine under the hood is the original Campro – no IAFM, no CPS, no VIM, no nothing. The only thing it has is R3’s touch – new 8mm spark plug cables, an R3 tuned exhaust system and an R3 ECU with remapped settings. All of this boosts power up to 135 horsepower at 6,100rpm and torque up to 164Nm at 4,200rpm, which exceeds the usual normally aspirated 100Nm per litre of displacement ratio, so that’s quite impressive. Or at least it all looks so on paper. The torque dip of the original Campro it is based on is as prominent as ever, rearing its ugly head at you as you wait patiently for the revs to build up past 4,000rpm. Then the engine comes alive and very much in your face as with the power build up, the loud noise and vibration increases. Somewhere past the 5,500rpm range the engine note suddenly changes without any warning – it’s really quite unacceptably loud and there’s too much vibration while not delivering the kind of power you’d expect from such a racket. This plays down the 135 horses abit – it’s there but your sense of sound overwhelms your body’s internal “torque-o-meter”. 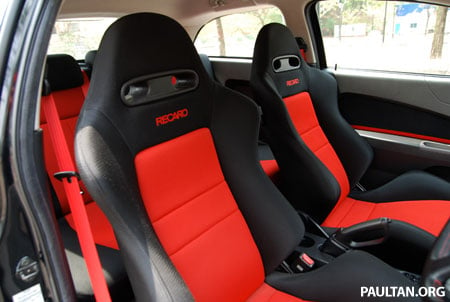 The Recaro SR4s perform well hug you and the front passenger, but because I am rather large my thighs did not feel very comfortable – I think the seats were too tight! A thinner person would feel very at home in these seats. The Momo Tuner steering wheel with the wheel spacer was fantastic – the spacer brought the steering wheel closer to me and I was able to sit in a better position for aggressive driving. Without the wheel spacer, the bottom of my wrist would not be able to touch the top of a stock Satria Neo steering wheel mounted on a stock steering column. I was taught this driving position by the experienced instructors from the BMW Driver Training program and I find that it does really help you control the car better. The downside to this is the indicator and wiper stalks are now way too far for practical usage and your fingers will not be able to reach them while your hands are still on the steering wheel. 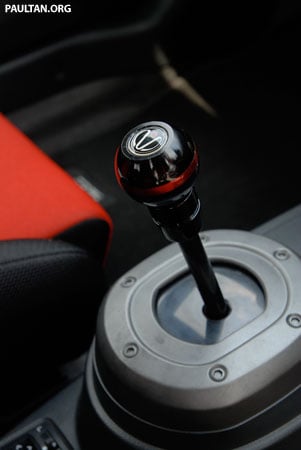 The shift knob is another matter. A study by a company which I cannot recall at this time showed that the best shape for a shift knob is one that has a pure ball-shaped top. Anyway I don’t need a study commissioned to tell me that a ball-shaped knob would feel the best in one’s palm. The shift knob that R3 put in the Neo is a ball, but it has a flat top. The flat top doesn’t feel too good when your palm is resting on it. The reason for the flat top is so that R3 could stick a sticker on it… you get either an R3 logo or a 5-speed slot logo, it’s up to you. Anyway, the photo shown here is the gear knob that was installed in the test unit, but this is a gear knob from the Waja MME and I think the actual gear knob is actually silver and slightly bigger in diameter. 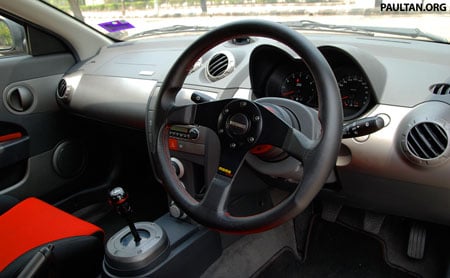 The suspension is alot firmer than a stock Satria Neo’s but the ride was still acceptable over the bad roads in Cheras. Even though the car had lowered ride height, the undercarriage never scraped speed bumps. There’s no need to awkwardly cross speed bumps at a diagonal angle slowly and allow everyone queueing up behind you with this car. There is minimal body roll until you push the car with autocross-like maneuvers and that is when the car begins to lean abit. As expected from an FF car, it understeers under pressure, no surprises there. But it was really sticky around corners, quite impressive for tyres that are not in pristine conditions. Steering feel and feedback was decent, but the same cannot be said about throttle input which has a rather typical Campro lag to it.

Pushing the car up to speeds of 140km/h to 160km/h was easy. The car’s rather minimal sound proofing combined with the loud engine and firm suspension that feels rather unstable on our trademark Samy-fied(tm) highways makes pushing this car to high speeds beyond the 140 to 160km/h mark rather tiring. Acceleration went down, but noise went up. Lots of fatigue. Hard to tell what was contributing to the noise, but you can be sure the stiff Adrenalin tyres contributed to it. 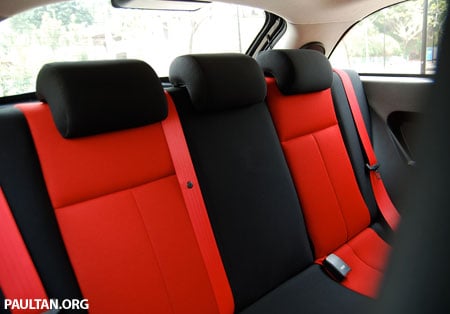 Aesthetic dressing up includes the trademark Incognito Black paint, an R3 bodykit that consists of a a new front and rear bumper, side skirts, and an R3 rear spoiler. The trademark red and white R3 stripes are also on the car, something which many Proton owners are copying now. In the engine bay, the R3-tuned Campro engine gets a red aluminium cam valley cover, an aluminium oil cap, and an R3 brake master cylinder cap. The 8mm spark plug cables mention before are also red in colour. On the inside, other than the Recaro SR4s done up in red and black, the rear seats and door trim also gets red and black themed upholstery. Even the seat belts are red, and the floor mats are black with the R3 logo on them. The 3 foot pedals were the standard Neo foot pedals, which came across as rather surprising to me. 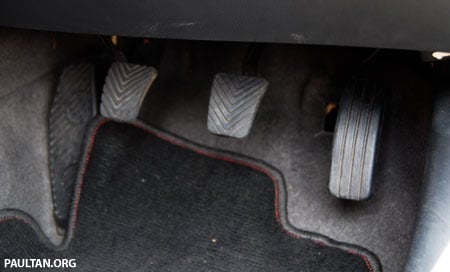 The Proton Satria Neo R3 definitely has the looks and a suspension setup that promises oodles of weekend fun, but the engine really leaves something to be desired. R3 should definitely look at doing a second run of the Neo R3 if/when the Neo gets the Campro CPS engine. With stock power levels of 125 horsepower, it should be possible to push the CPS engine to nearly 160 horsepower, with plenty of kick across the whole rev range. Also, the car’s full “track-throughbredness” potential could not be sampled through this test unit because the brakes were standard.

10 units of the RM71,000 hatchback have already been delivered to owners and the next batch of 10 have already been booked. That makes 20 out of the 50 car limited run spoken for at the time of launch, and probably more have been snapped up now. It is built from the mid-line Neo, which means no airbags or ABS. The owner of the first Proton Satria Neo R3 in Malaysia is Hidekazu Misawa, a Japanese expatriate in Malaysia. He says he was drawn to the car’s blend of performance and style and he will be bringing it back to Japan.

What the Satria Neo R3 is: a cheaper, more hardcore version of the Suzuki Swift Sport oozing Malaysia boleh-ness. 135 horsepower out of a 1.6 litre with just ECU and exhaust adjustments while still remaining JPJ compliant is impressive. Unlike the old Satria R3, this time around the Satria Neo R3 wasn’t marketed with data like Sepang lap times, so this may have downplayed the excitement abit. It’s still a decent fun drive, but it’s very single-purposed. It’s the sort of car where there’s only one way to drive it – all the way up to the redline and not anywhere else in the rev range, and around the bends rather than straights. The Neo R3 does well in what it’s supposed to do, but while I can imagine the Swift Sport as a daily driver, not this. 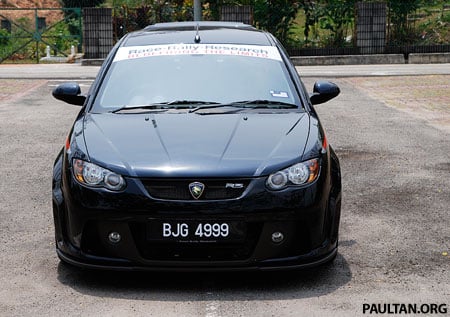 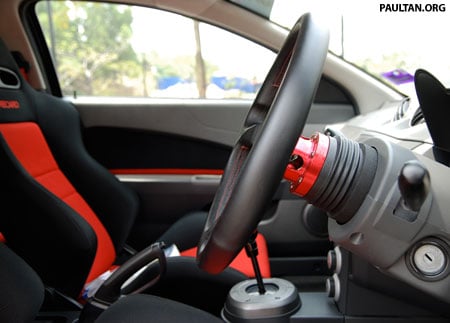 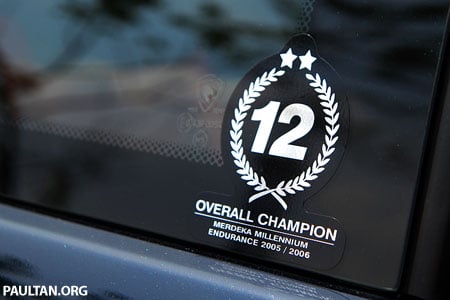 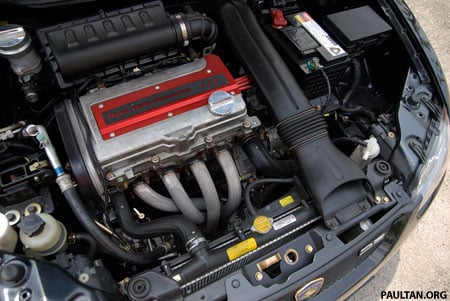 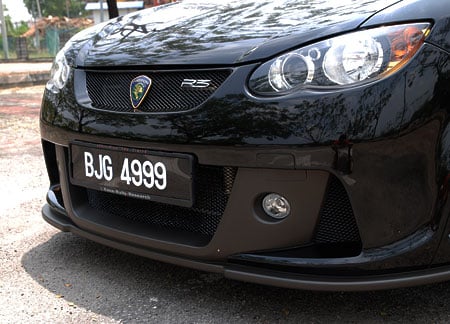 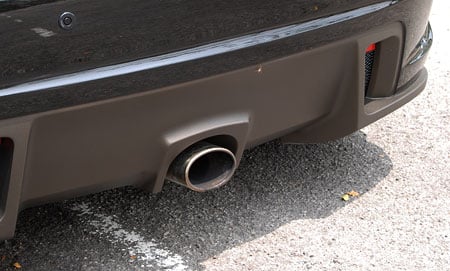 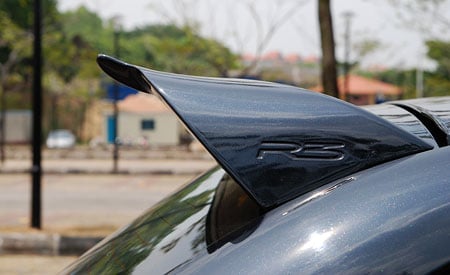