Proton has announced it has exported its 1,000th vehicle to South Africa to meet encouraging demand for the X50 and X70 in the country. This comes a few months after the carmaker resumed exports to the Rainbow Nation in May this year, with both SUVs leading the brand’s return to the country when they were launched in September.

Proton’s return to South Africa after a 10-year hiatus was headlined by CMH Group’s appointment as the official distributor of the brand’s vehicles in April. CMH Group has since expanded its distribution network to include more than 20 dealers across the country.

“The quick take up of our vehicles in South Africa is proof of the appeal of both Proton as a brand, and of our model range to car buyers there. We have a strong working relationship with CMH Group, and they have initiated many on-ground activities to give a taste of our current range to as many South Africans as possible,” said Steven Xu, Proton’s director of international sales. 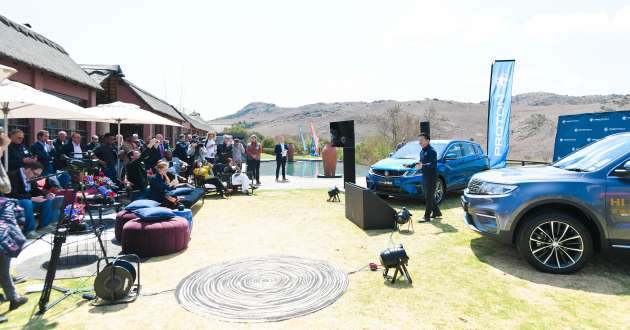 Both Proton and CMH Group was optimistic for the future, and driven by the strong sales performance so far, they are targeting to double the sales volume in 2023, with the Saga set to join the local line-up.

“Proton and CMH [Group] are confident of being able to grow sales exponentially in South Africa as the response we have received thus far has been very encouraging. We are committed to providing affordable luxury SUVs for South African car buyers and the X50 and X70 have the right combination of features and value to compete with other brands,” commented Xu.

“At the other end of the spectrum, we also feel that the Proton Saga will find its own niche with its combination of style, advanced features, and affordability,” he added.