Your author has known Courtney Barber for about five years and even collaborated on a project car, her 1965 Mustang hardtop, through Hot Rod’s sister magazine Mustang Monthly where I’m the editor. That car was the original Project Road Warrior, and after 250,000-miles in the span of a year and a half (13,000 miles of which was a road trip from her home in South Carolina to Alaska and back), she was looking for new adventures and another vehicle, one that could handle the rougher trips she was planning that would break the Mustang in half, but was still a Ford since she’s a Ford girl. 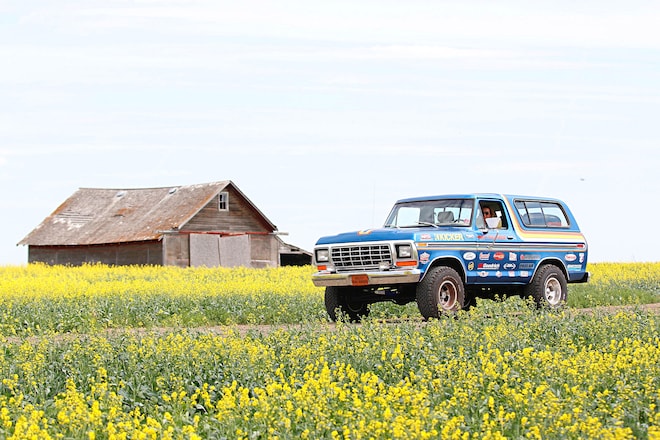 That ended up being a 1978 Ford Bronco she found online and bought sight unseen, then spent roughly a year building up into a fully capable on- and off-road driver with a thumping Kicker stereo, Old Air a/c, a 408ci stroker from Summit Racing, and a Gearstar Level 3 AOD. And yeah, that’s right; SHE wrenched on it the entire time but with a lot of help from Classic Speed & Custom in Charlotte, NC. True to her classic rock and hippy nature, the paint and stripe scheme on the Bronco is straight out of the Disco era and the 15×10 US Mags slot mags are period-perfect.

I was fully aware of her road trip adventures in the Mustang and even participated in one, but the conversation I had with her on the 2019 Hot Rod Power Tour (where she drove the Bronco and was featured in a video on Hot Rod’s website https://www.hotrod.com/articles/hot-rod-power-tour-2019-video-profile-1978-big-bad-bronco/) was a doozy. “I wanna drive the Bronco to the Arctic Circle! Come with me!” 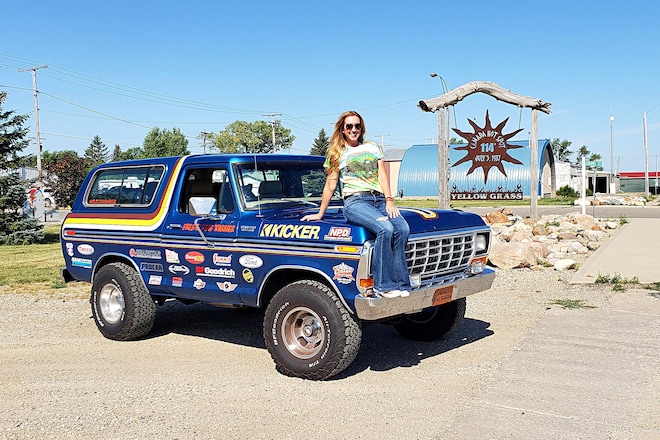 “How the hell do you drive to the Arctic Circle? I thought you could only fly there.”

“No, now there’s a road all the way to Tuktoyaktuk ……It should only take about 2 weeks. We can even dip our feet in the Arctic Ocean!”

The initial answer was “no way can I take that kind of time off” but after some careful contemplation and the realization that I hadn’t had an honest to goodness vacation for more than a few days here and there in the five years I had worked at Mustang Monthly, I thought, “Screw it, I’m in.”

We compromised on a few days and agreed to meet in Minneapolis, MN where I was for another event, her driving 1,400 miles from Charleston, SC to pick me up. During our conversations about the trip, I kept asking for the planned route and some kind of detailed notes. “Yeah, I’ll send those in the few minutes.”

A few minutes went by and nothing. Rinse, lather, repeat. The notes and route map never showed up, but she assured me the plan was set. Can you see where this is going? 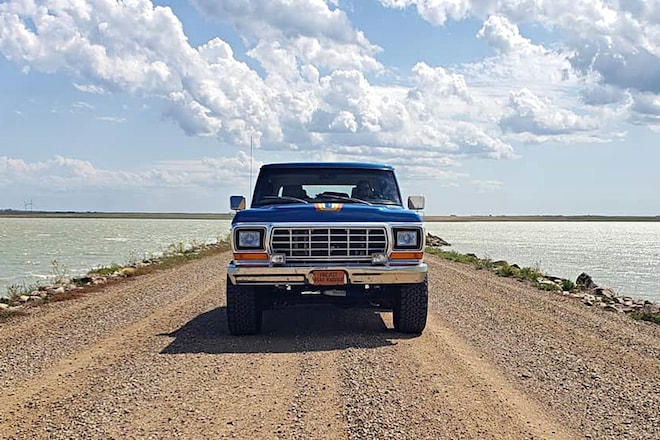 Once my Minnesota fling was finished, she rolled into the hotel, the Bronco’s 408ci small-block idling with a lopey rumble, heads turning to see who the blonde was in the stickered-up 4X4. Packed to the gills with luggage, tools, and spare parts and barely enough room for my camera/computer bag, we hit the road north and west and began the journey. At some point on that first day I asked, “So what’s the plan? Where are we going?”

“Uummm, north,” was all I could get out of her. Pressing harder, she finally pulled the wadded up “notes” out of her back pocket and admitted, “Yeah, I don’t really have a route. Or hotels. Or any plan at all really except to get to Tuktoyaktuk in a week or so.”

And that right there is why I love the woman. Total car chick that can wrench but void of the typical drama that often plagues both men and women, and a life goal of just saying, “F it, let’s have fun driving stuff.” It’s also why I was just fine with the lack of a concrete plan (not my first rodeo with her) and hit the road for an adventure.

Any route through the Yukon Territory is going to see at least a day or two of 500-plus miles of barren country with little to zero services and probably zero hotels. That’s why there’s a tent packed in the rear of the Bronco, if we need it. Just in case gas is a rarity in the Great White North, a 10-gallon fuel can (unfilled until we begin one of those days) is part of the luggage, as are spares for an alternator, distributor, coil, water pump, belt for the Eddie Motorsports serpentine drive setup, and anything else she could think of that might fail.

So, we have a proven reliable Bronco with a ton of spare parts but still no route map, hotels, or even an honest clue about a timetable other than that we need to be in Detroit by August 15th for the Woodward Dream Cruise. Oh well, what’s the worst that can happen, right? 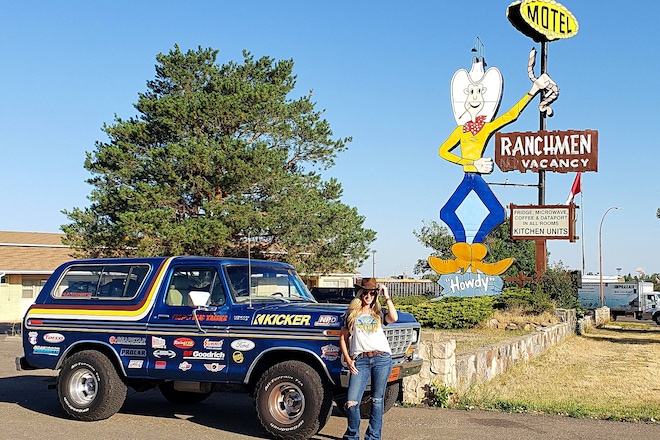 The first day’s drive took us from Minnesota across the Canadian border and on to Estevan, Saskatchewan Canada, and Day Two saw us travel westward through that Province (with a stop at Moose Jaw Ford for the video included here) and into Alberta for an overnight at the Ranchmen Motel in Medicine Hat. As I write this we’re on the Trans Canadian Highway en route to Banff and some of the most beautiful scenery we’ll see on this trip. So far, the Bronco is averaging roughly 12mpg with the Gearstar overdrive trans, 33-inch BFG tires, and 4.56:1 Yukon gears. It’s running about 2,000 rpm at 70-ish mph, and she’s traveled 2,585 miles since leaving home—about a quarter of the whole trip. We’re still struggling with the kilometers-to-miles and liters-to-gallon conversion rates but getting better with it. Gas is roughly $5.00 a gallon in the lower part of Canada but we expect that to climb the farther out of civilization we get.

Stay tuned as we’ll be delivering more photos and videos from the road, plus documenting anything interesting we come across and admitting to failures and breakages, full-on Roadkill style. Courtney’s happy place is behind the wheel of one of her vehicles, which is the main reason the Hot Rod staff started the Power Tour in the first place, 25 years ago. Don’t let your junk sit in the garage only to be taken out for a car show. Drive it and drive the wheels off it! The destination is just an excuse to enjoy the journey, and that’s the whole goal of a road trip. Wish us luck!