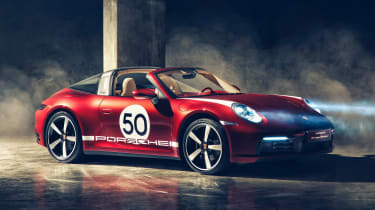 A new, limited edition Porsche 911 Targa 4S Heritage Edition has been launched, featuring a range of interior and exterior design features inspired by Porsche’s sports cars of the 50s, 60s, 70s and 80s.

The special edition model is on sale in the UK now, priced from £136,643, with first deliveries set to arrive in autumn. Production will be limited to just 992 examples globally, to match the current generation 911’s internal model abbreviation.

Some of the visual changes for the special edition model include a new “Porsche Heritage” emblem on the luggage compartment grille, new centre-lock alloy wheels and a unique white livery, with a pair of spear-shaped graphics for the front wings – which Porsche says is reminiscent of the company’s early race cars – plus door decals and racing numbers. The Targa Heritage Edition also uses the same Porsche badge design used on the 1963 911. 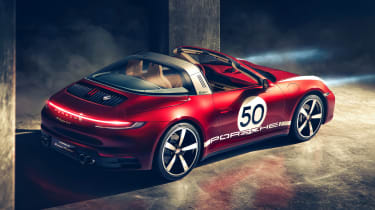 The interior of this limited edition 911 Targa has an equally nostalgic design, sporting two-tone beige and red (or optionally, black) leather upholstery, corduroy seats and door trim, as well as a classic-look analogue rev-counter and stopwatch mounted on the dashboard. There’s also a unique plaque on the passenger side dash numbering each example.

Like the standard 911 Targa 4S, the Heritage Edition is powered by a turbocharged 3.0-litre flat-six, which develops 444bhp and 530Nm of torque – giving the special edition sports car a 0–62mph time of 3.6 seconds and a top speed of 189mph. Power is sent to all four wheels via an eight-speed PDK dual clutch gearbox.

Porsche Design has also created a limited edition watch to complement the Targa Heritage Edition. Like the car, it’s limited to just 992 units – and it shares the same design as the car’s analogue gauges, with a black watch face, Phosphorus Green highlights and hands styled to look like the car’s rev-counter needle.

What do you make of the limited edition Porsche 911 Targa 4S Heritage Edition? Let us know in the comments section…