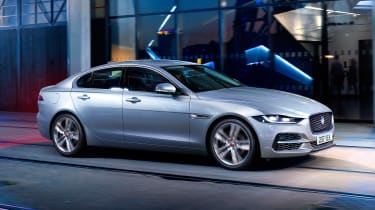 The Jaguar XE has been updated for 2020, updating the saloon’s engine range and fitting its latest infotainment system and connected service. The refreshed model is available to order now, priced from £29,635 for the entry-level S variant, climbing to £40,140 for the flagship HSE.

Jaguar’s biggest change for the XE is the addition of a new mild-hybrid diesel powertrain. The system comprises a turbocharged 2.0-litre four-cylinder engine, a belt-driven starter generator and a 48-volt lithium-ion battery pack, for a combined output of 201bhp and 430Nm of torque – enough for a 0–62mph time of 7.3 seconds and a top speed of 146mph.

The British brand says that the new mild-hybrid engine is 24bhp more powerful than the XE’s outgoing non-electrically assisted diesel, while being both less polluting and more efficient – delivering claimed CO2 and fuel economy figures of 127g/km and 58.5mpg respectively. 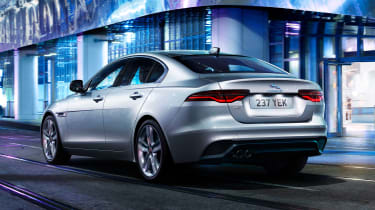 The XE’s turbocharged 2.0-litre petrol engines have been transferred on this new model intact – and they’re still available in outputs of either 247bhp or 296bhp. The lesser engine sends power to the rear wheels, while the flagship model is hitched to an all-wheel-drive system. All three engines also feature an eight-speed automatic gearbox.

Inside, Jaguar has junked the XE’s ageing Touch Pro Duo infotainment system in favour of its latest Pivi Pro setup. The system comprises a 12.3-inch digital instrument cluster, a 10-inch infotainment screen and a 5.5-inch monitor for the centre console which controls the car’s key functions, such as heating and ventilation.

JLR’s latest infotainment setup features its own dedicated battery pack, which reduces the load on the car’s electrical system and allows the car to automatically perform over-the-air software updates when parked. All of this can also be paired with an optional wireless smartphone charger and integrated signal booster, which Jaguar says will improve the quality of the phone’s reception when it’s being used inside the car. 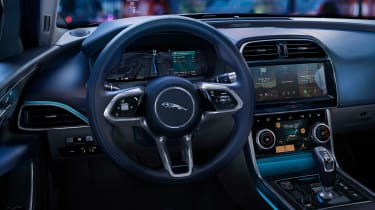 Jaguar has also added a new split-rim leather steering wheel and an improved cabin air ionisation system, which the company says can remove foreign particulates measuring down to just 2.5 microns in size from the interior air.

Finally, Jaguar has trimmed some of the redundant models from the XE’s line-up, cutting the number of configurations from 24 to 13. Now, just three trim-levels are now available – S, SE and HSE – to which buyers can add the company’s R-Dynamic Black option pack.

The XE’s bigger brother has also been updated. Click here for information on the new Jaguar XF…