The 11th-generation Honda Civic made its US debut in April 2020. It received new styling inside and out and other improvements over the outgoing model. Europe will now get to enjoy the new Honda, but it’ll have a different powertrain. Honda will launch the new Civic there as a hybrid later this year, naming the new model the Civic e:HEV.

The new Civic hybrid is only available as a hatch, and it will serve as the entry-level model in a market that will also get the new Civic Type R. Europe’s Civic has a different powertrain than what’s available in the US version, but the styling between the two is nearly identical. However, the new Civic does wear a few hybrid-specific touches. 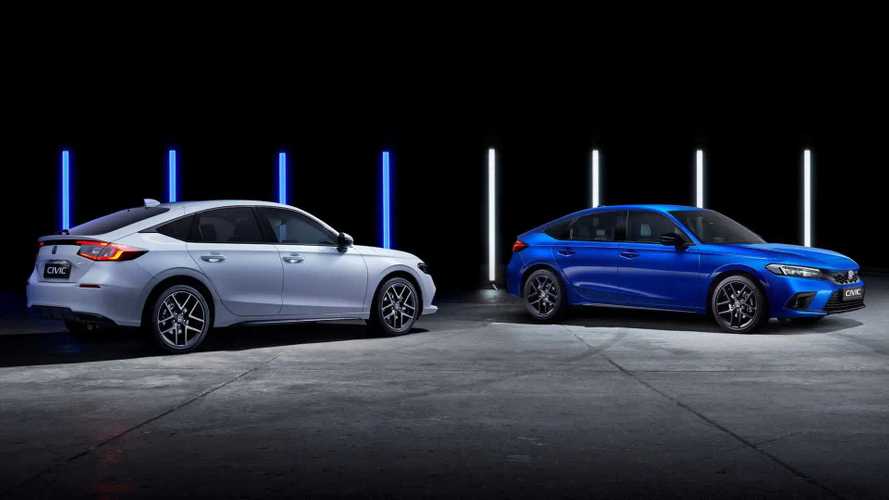 It’s the same story inside, with the Civic’s new cabin still looking great. It has a 9.0-inch infotainment screen with a 10.2-inch digital instrument cluster available alongside a Bose 12-speaker audio system. The Civic also arrives with the latest version of Honda’s Sensing suite of advanced safety features, which includes lane-keep assist, blind-spot monitoring, and more.

The new Civic hybrid pairs a newly developed 2.0-liter Atkinson-cycle engine with two compact electric motors. The combined output is 181 horsepower (135 kilowatts) and 232 pound-feet (315 Newton-meters) of torque. The Civic also carries the company’s new 72-cell lithium-ion battery pack. Honda says that the improvements it made to the engine help the car achieve “one of the highest” thermal efficiency figures for a production car.

The powertrain also features a new power control unit located under the hood and the latest version of the brand’s Intelligent Power Unit. Honda says it’s smaller and lighter, but it has increased energy density. The Civic e:HEV has four drive modes: Eco, Normal, Sport, and Individual. The Individual mode allows drivers to tailor the engine, transmission, and instrument cluster display to their liking. Honda uses the power control unit to operate the car’s fixed-gear transmission.

The new Honda Civic e:HEV hybrid will go on sale in Europe this fall. We expect pricing information closer to its launch on the Old Continent. There’s no indication that Honda has plans to offer the hybrid powertrain here.