The new Aston Martin DBX is set to rival the Bentley Bentayga with prices starting from £158,000 and factory is up and running

Four years on from breaking ground at a new factory at St Athan in Wales, the very first showroom ready Aston Martin DBX SUV has rolled off the line at the firm’s latest UK manufacturing facility.

The DBX – of which 80 per cent will be built for export – is anticipated to become the brand’s best seller overnight, and up to 5,000 per year can be made at the multi-million pound St Athan factory, based on a converted 90-acre Ministry of Defence site in south Wales.

The DBX has been in development since 2015, and is designed to rival the Porsche Cayenne Turbo and Bentley Bentayga. It is, Aston Martin hopes, the model that will attract more female buyers to the brand, but also a car that the company expects will appeal to existing customers. More than 70 per cent of Aston’s sports car owners also have an SUV in their garage.

The DBX is just over five metres long and 2.2 metres wide, including side mirrors. Like all modern Astons, it’s based on an aluminium construction – although the new model gets a specific architecture that sets it apart from the rest of the line-up, as well as composite panels to help keep weight down to just over 2.2 tonnes.

The side profile reveals relatively short overhangs, a set-back cabin, a long bonnet and a cleverly designed roofline that makes it look more sharply raked than it really is. 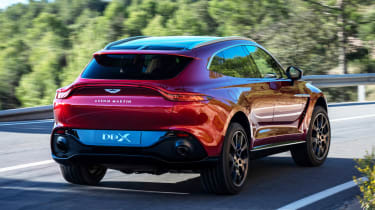 At the front, the new arrival has the largest front grille Aston has ever made in its 106-year history – designed, creative director Marek Reichman says, to clearly identify the new model as an Aston Martin. “I didn’t want it to be mistaken for anything other than one of our cars,” he told us. “And I didn’t want to try to hide it, either: this is one of our core models. We’ve stopped being just a sports car manufacturer.”

The rear features a fresh take on Aston’s tail-lights, and the bodywork tapers in noticeably beyond the rear wheels – a technique employed to help clear up the car’s aerodynamics and also take it away from traditional ‘slab-sided’ SUV looks.

At the heart of the DBX is a retuned version of the Mercedes-AMG-sourced 4.0-litre twin-turbo V8 petrol engine used in the Vantage and DB11. It produces 542bhp and 700Nm of torque – enough to take the car from 0-62mph in 4.5 seconds and to a top speed of 181mph. A revised firing order and an active exhaust are said to give it a different vocal character to Aston’s sports cars.

The DBX features a nine-speed torque-converter automatic gearbox, and four-wheel drive, incorporating an active centre differential and an e-diff at the rear. This allows torque to be split front to rear (it ranges from a 47:53 split, to almost entirely rear-drive), although the car also uses its brakes to vector torque across the front and rear axles to aid turn-in and improve agility.

The car returns just under 20mpg on the official WLTP test, meaning CO2 emissions of 269g/km. Aston hasn’t confirmed plans for an electrified version, but well placed sources admit that its platform has been engineered to accept a plug-in version in the future, particularly when city-centre regulations could outlaw cars with no pure-electric capacity. 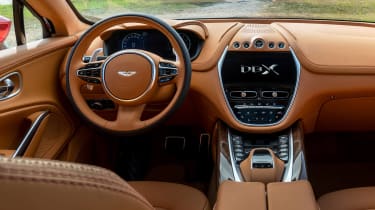 Aston isn’t claiming that the DBX will be able to match a Range Rover off road, although the brand’s dynamics chief, Matt Becker, says it should be at least as capable as the Cayenne or Bentayga – so everywhere from muddy tracks to sand dunes, and very much at home hauling a horse box across a soaking-wet field.

“We tried many of the car’s likely rivals early on,” he told us, “and it brought it home to us what a challenge this was going to be. It’s a car that has to handle around the Nürburgring but also be capable of towing more than 2.5 tonnes or driving through half a metre of water.”

Indeed, the car’s maximum wading depth is precisely 500mm, and its approach and departure angles are 22.2 degrees and 24.3 degrees respectively, although raising the air suspension increases these figures to 25.7 degrees and 27.1 degrees.

On the road, the air suspension – which has four settings – is paired with a 48-volt anti-roll system. Aston says that, in its most aggressive setting, the system can keep the car’s body roll to a level comparable with that of the DB11 GT. But when you’re going in a straight line, it counters the movement of the wishbones to smooth out the ride.

Inside, the DBX features a new iteration of Aston’s infotainment system, developed with Daimler. There’s a 12.3-inch digital instrument cluster and a 10.25-inch central infotainment display neatly integrated into the fascia. Apple CarPlay is standard, along with an 800-watt sound system, USB sockets front and rear, a three-zone climate control system and ambient lighting with a choice of 64 colours. There’s room for four six-footers, plus a shorter adult in the middle seat, and the rear feels surprisingly airy, thanks to a full-length panoramic glass roof that allows extra light in.

Unsurprisingly, the DBX is the most practical Aston ever. Beyond the five-seat cabin, with a pair of Isofix points in the rear, the boot capacity is a healthy 632 litres, and there are an additional 62 litres below the boot floor. The rear seats fold in a 40:20:40 split, and the car can lower itself by 50mm so it’s easier to load heavy items. 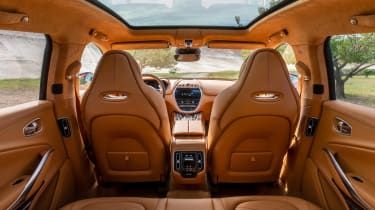 In addition, the back doors have minimal intrusion from the rear wheelarches, making it easier to get in and out, and to install or remove a child seat or baby chair. The DBX is likely to be available as a four-seater through Aston’s Q personalisation service, which would allow the space between the rear seats to be used for everything from champagne fridges to cigar boxes.

Back in the regular DBX range, Aston will also offer a number of ‘packages’ that will focus on specific areas. The Pet package brings a portable washer to help clean a muddy dog after a walk, while the Snow package includes boot warmers. Additional accessories will include a bike rack, a roof box, a gun cabinet and a surfboard holder.

It’s available to order now, with UK prices starting from £158,000 – around £20,000 more than a V8 Bentayga and about the same as a Lamborghini Urus. The first DBXs should reach customers by spring 2020.

As Aston Martin’s Chief Creative Officer, Marek Reichman is more accustomed to designing elegant sports cars, so with the DBX he had a very different challenge. Auto Express sat down with him to get his take on the project and what’s next for the company.

Q: How comfortable are you with the idea of Aston producing an SUV?

A: “Very. We’re a company that has always made sports cars. There’s no reason why an SUV can’t be the next generation of what we consider ‘sporting’ or ‘sports’. It’s a Sports Utility Vehicle but it’s not ‘utility’ like a [Land Rover] Discovery or Defender.”

Q: How did you strike a balance between desirable looks and practicality, then?

A: “I said to the designers, ‘This is not a bread van. It sits somewhere between a coupé and something like a Mk4 Discovery.’ Some SUVs are about being upright, being stately, but for us, we wanted to show our car’s sporting capability visually.

“DBX had to look dynamic, look lithe, because this is a car that has to perform on a dynamic level but also a luxury level. Equally, I’m 6ft 4in and I told the team, ‘I want to be able to sit behind myself in this car.’ And I can.”

Q: Is this going to be the only Aston Martin SUV? You originally showed a two-door – but could you also go up or down in size?

A:  “When we showed the first concept car, the two-door coupé, maybe that’s the future of GT driving. Who knows? But it was a bit of a red herring to signify and announce that we were doing this.

“As for other models, think of DB11, Vantage and DBS Superleggera; it’s one platform, with the thinking to develop three cars – and they all have derivatives, or soft-top versions. In effect we’re doing six cars off one initial platform. So we can’t do the DBX and say, ‘It’s an SUV and it lives as this one SUV forever.’”

Do you like the look of the new Aston Martin DBX SUV? Let us know your thoughts below…