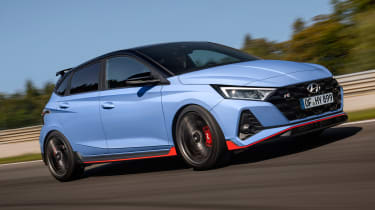 Hyundai’s N division has taken the wraps off its second performance model, the all-new i20 N. Designed to take on the Ford Fiesta ST, Hyundai says this new small hot hatch is inspired by the company’s WRC rally car, and will go on sale in the UK early next year.

Development of the Hyundai i20 N was conceived at the very beginning of the supermini’s development process – and there’s certainly no mistaking it from the standard i20. The i20 N features a wild body kit comprising a deeper front bumper with enlarged air intakes, unique side skirts that wrap around into a reshaped rear bumper with new diffuser, while a roof-mounted spoiler, inspired by the WRC car, has also been added.

Power is provided by a new 201bhp 1.6-litre four-cylinder turbocharged petrol engine paired to a six-speed manual gearbox. Hyundai doesn’t intend to offer a dual-clutch automatic version, unlike the larger i30 N. Hyundai claims the i20 N weighs just 1,190kg – the same as the WRC car – which enables a 0-62mph time of 6.8 seconds and top speed of 143mph. 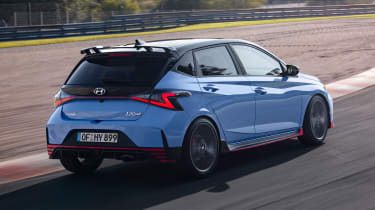 Peak torque of 275Nm is available from 1,750rpm right across the rev band until 4,500rpm. Hyundai says this new ‘Flat Power’ characteristic of the engine allows for greater engine response and improved acceleration.

The six-speed manual gearbox has been reinforced to cope with the greater amount of power, and it has also allowed Hyundai to fit a launch control function. A mechanical limited slip differential is expected to be fitted as standard to UK models, too.

In total, the i20 N has five driving modes: Normal, Eco, Sport, N and N Custom. These adjust the parameters of the car’s engine response, exhaust noise, steering feel and stability programmes depending on the mode. However, owners can adjust each individual setting to their own taste using the N Custom mode.

Chassis tweaks over the regular i20 include new springs and dampers, increased front camber, uprated brakes that are 40mm larger and retuned electronic power steering. The suspension setup is passive, with no electronic damper control a part of the package. A new front axle and torsion beam rear axle provide higher stiffness, while – Hyundai claims  – also ensuring acceptable ride quality. 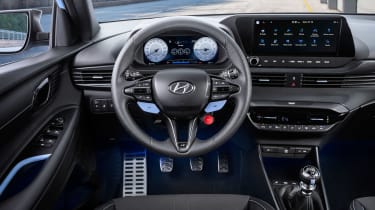 Hyundai says the chassis has also been reinforced at 12 different points to ensure greater agility while driving. The 18-inch wheels are shod in Pirelli P-Zero rubber developed especially for Hyundai’s N models.

The cabin is largely unchanged over a regular i20, but Hyundai has added a pair of sports seats, aluminium pedals and a sports steering wheel, which sits ahead a digital instrument cluster. A 10.20-inch touchscreen system sits on the centre of the dash and gives access to all of the car’s functions as well and adjustable driving modes. It supports Apple CarPlay as well as Android Auto.

Full UK pricing and specification is yet to be announced but prices are expected to start in the region of £20,000, which would make it very competitive with its main rival the Fiesta ST.

What are the best hot hatchbacks currently on sale? Click here for our top 10…