McLaren 765LT is the latest Super Series flagship has an output of 755bhp and a starting price of £280,000 – but every example has already been sold 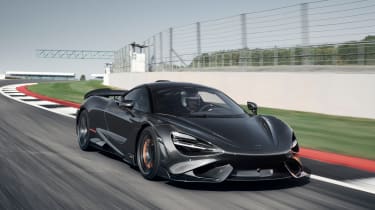 McLaren has started production of its new, range-topping 765LT supercar. The first examples are currently being assembled at the British brand’s headquarters in Woking, before the first customer deliveries arrive later this month.

Prices start from £280,000, while production will be limited to just 765 units, spread over the next 18 months. However, McLaren has already sold all of the planned build slots for this year’s production run – and the company is well oversubscribed for next year’s allocation, too.

The McLaren 765LT is powered by a tuned version of the twin-turbocharged 4.0-litre V8 engine found in the 720S. The supercar’s power and torque figures stand at 755bhp and 800Nm respectively, which is enough for a 0–62mph time of 2.8 seconds, a 0–124mph time of seven seconds flat and a top speed of 205mph.

McLaren is also keen to stress that the 765LT’s in-gear acceleration is 15 per cent quicker than that in the 720S, which is thanks to the company’s drastic weight-loss programme that has shaved 80kg off the standard supercar, taking its kerb weight down to just 1,339kg.

Upgrades include thinner glass, a lightened transmission and a quad-exit titanium exhaust system, which is 40 per cent lighter than a conventional steel unit. New 10-spoke forged alloy wheels shave another 22kg off the 720S, while the car’s air-conditioning and stereo systems have both been removed – although both can be re-fitted at no extra cost.

The 765LT also comes with a new aero package, which both looks more striking than the standard car’s bodykit and provides an extra 25 per cent more downforce. The upgrade comprises a carbon fibre splitter, a new front bumper, broader side skirts, a more aggressive rear diffuser and a larger active rear wing. 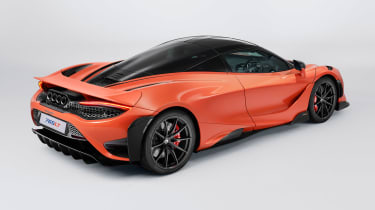 Of these components, the rear wing and rear bumper were designed by the McLaren Composites Technology Centre (MCTC) – which is the first time the brand’s offshoot research centre has been drafted into work on a road car. Meanwhile, carbon-ceramic disks and brake callipers from the McLaren Senna reduce stopping distances.

McLaren has made the 765LT’s steering quicker than the 720S’s, while a stiffer torsion beam has been added to increase feedback to the driver. The front track width has also increased by 6mm and the front ride height is 5mm lower to improve handling, with the dampers and springs specially calibrated to factor in the new setup.

Carbon fibre also features heavily in the 765LT’s interior – the central tunnel, racing seats and floor are all hewn from the lightweight material. The dashboard, steering wheel and seats are also trimmed in Alcantara, which buyers can spec in a range of colours.

There are also 17 exterior colours to choose from, including the 765LT-exclusive Nardo Orange and Smoked White. However, buyers can also opt for a completely bespoke paint scheme through McLaren Special Operations (MSO).

Some of the paint and body options specified by customers so far include a classic hot-rod inspired Strata Azores colour scheme, an exposed carbon fibre finish and a 3D honeycomb livery, which MSO has dubbed “Geohex.”

Do you like the look of the new McLaren 765LT? Let us know your thoughts below…