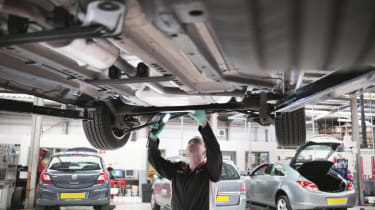 The MoT test is to be made stricter, with cars having to meet more stringent emissions targets in the future, according to the Driver and Vehicle Standards Agency (DVSA). The annual roadworthiness check will also be updated to ensure recent developments in safety technology are inspected to ensure proper operation.

Neil Barlow, head of MoT policy at the DVSA, said: “The MoT will need to change if it is to stay useful, both in terms of safety systems and emissions.”

“Manufacturers put loads of effort into designing some pretty whizzy tech that goes on modern cars with internal combustion engines”, Barlow said. “We will probably want to be better at checking that those systems will be working as designed.”

Barlow added that while “there isn’t anything immediate” in the pipeline with regard to toughening up the test, he is “keen that we get towards” tougher emission tests and inspections of safety systems.

The MoT test is unlikely to become so strict that cars would have to meet the emission limits they hit when they went through the type approval process, as engine wear and other aspects of degradation mean cars often get less clean as they age.

“Obviously that won’t be back to factory design, and has to be a solution that’s cost-effective for industry”,  Barlow said. He added: “There’s no change planned that there’s a date for, but this is the direction of travel – emissions will be an important thing to check….It probably is clear as we look ahead, that if we want to keep driving down overall emission levels…we’ve got to check that cars are performing as they were designed.”

Such a toughening-up of emissions checks would partly be driven by national emission targets for the collective benefit of the country, Barlow said: “Those Government targets are for us, aren’t they? They’re for us and our health. It’s not about fulfilling draconian Government aims, it’s about improving our health, and if we can keep vehicles working better as they were designed, that must be a good thing.”

Advanced safety systems to be checked at MoT time

Turning to safety, all new cars sold in Europe from 2022 will have to have several safety systems, including intelligent speed assistance (a form of speed limiter) as well as autonomous emergency braking and lane-keeping assistance. Systems such as these, where fitted, could form part of the MoT test in the future, though which technologies would be checked have yet to be decided.

“We talk about emergency braking”, Barlow said. “From a motorists perspective, you might say ‘well I would expect that to be tested’. But what are its failure modes? What do we find with the experience of this being in service for a while? Does it actually go wrong? In what ways does it go wrong?

“The stuff we want to test is the stuff that does go wrong. There’s no point in testing stuff that proves to be incredibly reliable. I’m not saying that [AEB] is one or the other of those.. but we need to make sure it’s evidence based, what we include in the test.”

Barlow stressed that fundamental checks such as ensuring tyre-treads are of the correct depth would always be core to the MoT, saying: “The basics are really important, and we don’t want to lose those”.

What’s your view on tougher testing of emissions and safety kit being brought into the MoT? Join the debate in the comments…