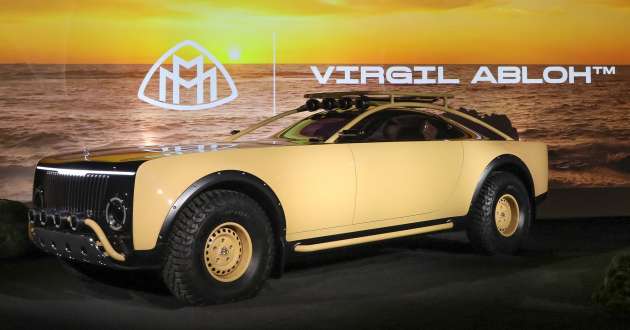 This is the Project Maybach, an all-electric concept that was designed and built as part of a partnership between Mercedes-Benz and the late fashion designer Virgil Abloh, who passed away from cancer on November 28, 2021. The concept is being revealed following the wishes of Abloh’s family and is currently on display at the Rubell Museum in Miami.

This is the second time the German carmaker collaborated with the founder of the design company Off-White and head of Louis Vuitton’s menswear division, with the first being the race car-inspired Project Gelandewagen based on the G-Class.

Like that creation, Project Maybach is a stunning thing to look at, with both Abloh and Gorden Wagener – Daimler AG’s chief design officer – given complete creative freedom to envision what the future of electric travel could look like, with no restrictions like production requirements.

Inspired by the great outdoors and recontextualising a traditionally urban-focused luxury brand within an off-road environment, the result is a coupe that measures almost six metres long that looks properly rugged.

Key design elements include a flat face featuring the Maybach grille and a wide-width light bar, accompanied by circular headlamps and four auxiliary lights. A long bonnet (with integrated solar panels) leads into a teardrop-shaped cabin that gently flows into the rear deck, while prominent haunches form part of the side profile.

The rear mimics the flat look seen at the front, with Maybach-branded taillights mounted low down to match. An external roll cage emphasises the concept’s off-road nature, along with chunky all-terrain tyres, metal skid plates and body cladding with exposed rivets over the wheel arches.

It’s equally as dramatic on the inside, as the concept has an axe embedded into the door jam, two seats that can fold completely flat to form a bed, and embedded storage compartments. Other elements within the cabin have a retro-like appearance to them, back by modern technologies like a digital instrument cluster, among other non-mentioned items.

“The power of Abloh’s work is not only from the product design, but also the exploratory conversations that his work ignited,” the company said in its official release. It adds that the Mercedes-Maybach show car “exemplifies the possibilities of future design,” although there’s no indication if Project Maybach previews a potential production vehicle.