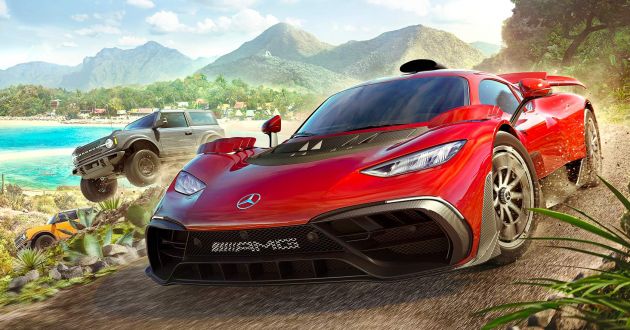 The long-awaited Mercedes-AMG One will finally reach customers’ hands later this year and as such is likely to make its debut in production form at the Munich Motor Show next month. But game developer Playground Games has beaten Stuttgart to the punch, using the ongoing Gamescom expo as an opportunity to reveal the car on the cover of its upcoming title Forza Horizon 5.

But hang on, haven’t we already seen the One in full before? Yes we did, back in 2017, but that was only a concept meant to preview the car. Since then, we’ve only seen prototypes in camouflage, so this is technically the first time we’re seeing the finalised car without disguise.

Still, the One looks pretty much identical to the show car we saw all those years ago, with the only minor changes being the additional fins in the front air intakes, larger gills above the front wheel wells, slotted aero wheel covers and slightly bigger door mirrors. Otherwise, the car retains its jaw-dropping looks, including the long, wide body, low-slung glasshouse, roof scoop, dorsal fin and massive active rear wing.

Also unchanged is the awesome Formula 1-derived hardware, consisting of a 1.6 litre split-turbo V6 from the W07 Hybrid race car that propelled Nico Rosberg to his only world championship in 2016. The engine is mated to MGU-H and MGU-K electric motor-generator units as well as twin front-mounted motors to deliver a total system output in excess of 1,000 PS. Top speed is quoted at over 350 km/h.

Just 275 units will ever be built and they’ve all been sold out despite the rumoured €2.17 million (RM10.7 million) price tag, so it’s not like you’ll be able to go out and buy one. You will be able to experience all the One’s performance in-game, however, as well as its active aerodynamics and “Road” and “Track” drive modes, recreated in great detail for Forza Horizon 5.

The Mercedes-AMG One isn’t the only car to be featured on the game’s cover, which also displays the new Ford Bronco. Set in Mexico, Forza Horizon 5 will be available to play on the Xbox Series X and S console as well as on PC, starting on November 5 for those with Early Access and on November 9 for everyone else.